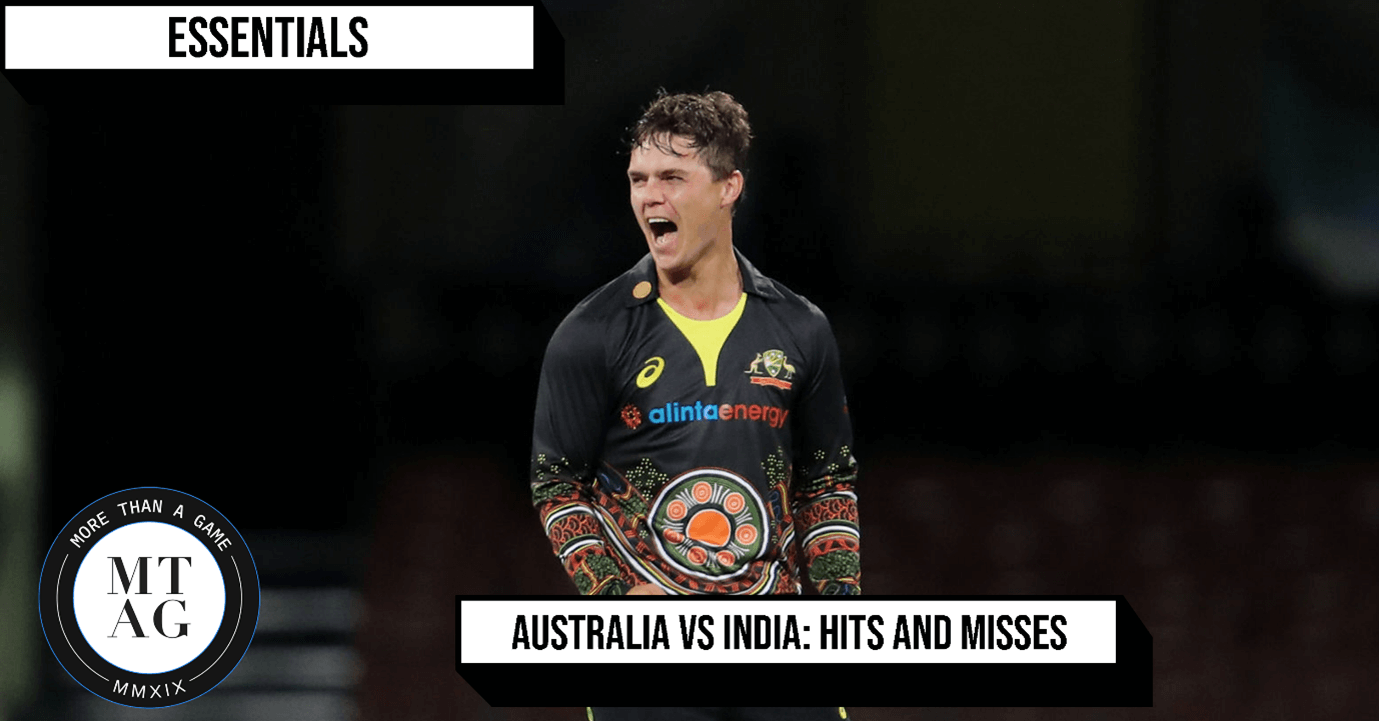 Entering this contest, the circumstances were identical to the first two matches of the ODI series. Only this time, it was India with the unassailable lead and Australia playing for pride in the shortest format of the game. The Men in Blue went for an unchanged lineup as Aaron Finch returned for Australia as captain, replacing the all-rounder Marcus Stoinis.

India won the toss and elected to field first, looking to continue with their stellar chasing record on the Sydney Cricket Ground.

Meanwhile, Australia had other ideas for what was about to come.

As the Aussies restored some pride, clinching the clash by 12 runs, here are our hits and misses.

Mitchell Swepson is a dream find

When Australia decided to go forward with two right-arm leg spinners, a few eyebrows were raised in the 1st T20I. Mitchell Swepson bowled a bit short that day and wasn’t at his very best, finishing things with an economy of 10 in his 2 overs that day. But he was today and that performance now feels like it happened ages ago.

The youngster made a stellar comeback in both the second and third matches and proved to be the difference between the two sides today. Swepson, who has the simplest action you’re going to see for a leggie, just hops down a bit and delivers the ball. He is someone who is known to be on the shorter side but varies his pace beautifully, not allowing the batsmen to capitalize on the length that he bowls. And he showed his class in this series.

The wily customer troubled the Indian batsmen as they struggled to put him away, taking 3 wickets in the process. After getting Shikhar Dhawan on a flatter one, he got Sanju Samson and Shreyas Iyer in the same over. Samson mistimed the lower full toss, hitting it straight to long-on. The one that got Iyer was a beauty.

Pitching in the good length, the wrong-un skidded a bit of the surface and gave Iyer no chance to understand the trajectory of the ball as he was out plumb LBW. It seems Australia have found the perfect partner for Adam Zampa to take India on in the Australian conditions.

Virat Kohli: The winner in a losing cause

As wickets were tumbling on the other end, Virat Kohli made sure he held one end firmly. There’s no denying that he must be gutted that he wasn’t able to take the team home but nothing can take away the fact that he looked in sublime touch throughout his knock. Whether it was coming down the track, hitting the ball through the extra cover region or lofting it over long-off or leg side, Kohli made sure that he ticked all boxes.

At one stage, it even looked like the partnership between the Indian captain and Hardik Pandya will turn the match on its head but it wasn’t to be. A lot of people noticed how the De Villiers-esque movement around the crease has helped Kohli pull out shots out of the bag that he doesn’t usually play, adding to an armory that is unmatched.

If it weren’t for Daniel Sams’ blinder, a classic Kohli chase masterclass could have been completed. But that isn’t to take away from the fact that he looked unreal.

Wade and Maxwell made India pay

Matthew Wade started where had he left off in the last match. Losing Aaron Finch in the second over for a duck didn’t hamper Wade’s approach as he went after the bowling with all his might. The Indian bowlers were a fraction too short and the wicketkeeper batsman didn’t miss out on any opportunity to punish the wayward balls sent towards him. As Steve Smith departed, trying to hit one over extra cover, in came Glenn Maxwell. And on this tour, the world is getting to see what he’s capable of after what was a dismal IPL.

Maxwell jumped and hopped across the crease, picking balls from outside off to send them over the square boundary. While he did get multiple lifelines as he was dropped twice during his innings, all credit must go to the illustrious all-rounder for a magnificent display of power hitting, making Wade play second fiddle in the partnership.  Yuzvendra Chahal did better him once, only to end in heartbreak as it was a no-ball.

It was a top performance from both the pair, to which India had no response. Lest we forget, Maxwell also contributed brilliantly with the ball, getting KL Rahul out for a duck on the second ball of the innings.

When opportunity knocks at Sanju Samson’s door, he goes missing

Sanju Samson was brought into the side after his fine displays in the IPL. A player who oozes class, it was finally the right time and opportunity to cement his place in the team once and for all. But he has failed to capitalize on every opportunity presented to him and how.

It just feels like he hasn’t been able to justify the hype around him throughout. Playing all three T20I matches, Samson just managed to add 48 runs in 34 balls, a mediocre number for an elite talent. And while there can still be a justification for the low scores, the way Samson has thrown his wicket away each time, any explanation isn’t worth the time.

The only department where he has been quality is the field but to keep a spade a spade, he has not delivered as the No.4 as India wanted him to.

Daniel Sams might have won the game for Australia on the field with two wonderful catches but his economy has been a shambles in the two matches he has played. In his 2 overs, Sams got hit for a whopping 29 runs, adding to his 41 runs in 4 overs in the last game.

The highest wicket-taker in the Big Bash League, Sams has the potential but he has been one-dimensional throughout the matches. The same can be said for his seam partner, Sean Abbott.

Abbott, who has been highly touted as one of the best products of the Australian domestic cricket scene for a long time now has not made an impact in the whole series. He was once again on the shorter end and leaked 49 runs in the 4 overs he bowled.

Australia won’t be too concerned though, as they will soon be seeing their spearheads return for the Tests. But if they’re looking to build a team a with options that promise to deliver for the World Cup, they will definitely have some concerns.

India: Average with the ball, pathetic on the field

8 – 8 of the 9 dropped catches in this #AUSvIND T20I series have been recorded by India. Update. https://t.co/pk6kvttv8W

India has developed into becoming a good bowling side and a fantastic fielding side over the years. But on this tour, they have been nowhere close to what they are capable of. Some might argue that the Aussies were average in the field as well but to be honest, they were way better than how India conducted themselves so far.

Deepak Chahar started the innings beautifully, swinging the ball and troubling Wade initially. But after a point, he started bowling shorter and the Aussie batsmen capitalized. Washington Sundar followed suit.

While he did get both Finch and Smith, he was also on the shorter end of things and paid the price for it. Natarajan was effective in his first two but conceded 22 in his last two overs. Both Yuzvendra Chahal and Shardul Thakur were also taken to the cleaners, with both having the economy of over 10. And the bowling wasn’t the only problem on the day.

KL Rahul missed a stumping chance and when Chahal got Maxwell, he bowled a no-ball. Maxwell was dropped twice after that, once by Chahar and then by Chahal. The ground fielding was below-par as well, leaking runs through constant misfields and Australia converting ones into twos.

India will have to put in the graft on these aspects to avoid the Test series becoming a nightmare for them.