While global leaders are boasting that the world is marching towards gender equality, simply put, this claim is far from reality. As men mostly dominate all the lucrative offices, the sports industry is no exception. While a BBC conducted study revealed that equal wages are paid to both men and women across 83% of sports, the coverage and general attitudes regarding the same continue to be in a regressively dire state. Sports like golf and cricket still have a significant wage gap, with football having the greatest disparity and retaining the largest pay gap.

To put things into context, Forbes’ highest-paid athletes’ list of 2019 had 12 male footballers out of a possible 100, while no female player could make it to the list. The only female athlete to feature was Serena Williams, who stands 66th on the list. Lionel Messi, who tops the list, made $127 million, which is 21.9 times more than what Alex Morgan earned, a damning statistic considering the American is the highest-paid female footballer in the world.

Similarly, FIFA awarded $15 million as the prize money to the winners of the Women’s World Cup. For the men’s edition, it was $576 million. While on the surface, this could carve one’s entire narrative, it is imperative to understand that these statistics can often be misleading as there are a lot of factors that affect the earnings. To reach a sensible conclusion, let’s delve into this and explore the nuances of this dilemma on both sides.

The first and foremost argument made by the critics against equal pay is that women’s sports do not generate as much revenue in comparison to men’s sports, making it economically unviable for the employers to pay them equal wages. The more revenue one generates, the higher one gets paid-it’s a straightforward equation. There is no denying the emphatic difference in viewership numbers between sports involving men and women, with the former emphatically trumping the latter. While this is true and gives ammo and fodder to the usual sceptics, it is at best a bird’s eye view.

To have a worm’s eye view, we need to understand that the root of the problem is not the unequal payment, but the structural and systematic sexism which creates hurdles which result in female athletes being bereft of equal opportunities.

This will always remain the case as women’s events are not marketed sufficiently well. Broadly speaking, when one talks about revenue generation, they talk about factors such as endorsements and ticket sales. It all boils down to the fans. It is an incontrovertible fact that sport in general is considered as a man’s world, not just by males but by society in general due to a highly skewed perspective that numerous people tend to hold. As a result, it is backed by excellent advertising and flexing the financial muscle through heavy investment. On the other hand, women’s participation is looked down upon through familial restrictions and a host of societal taboos.

In countries like Saudi Arabia, the misogynism is rooted to such an extent that it was only in 2018 that women were first allowed to sit in the stadium and witness a game of football between Al-Ahli and Al-Batin in the Saudi Pro League. Despite such a move signalling progressiveness for the first time, the country is yet to have a women’s football team.

However, even when these hurdles are crossed, the lackadaisical approach of media houses makes it worse. The lion’s share of the revenue comes from the viewership of the sport, but the media coverage and marketing can be so dull and inadequate for women’s sports that it is impossible for them to be efficacious. In America, 40% of sportspeople are women, however, only 6-8% of media coverage regarding all sports is devoted to them. The male-biased demographics of those channels don’t let the viewing figures increase for women’s sports.

Not just the governing bodies need to step in and provide adequate financial support, but even the corporates need to do their bit. According to a 2018 Statista report, women’s sports receive only 0.4% of the sponsorship money. The rest is directed towards men’s events. As men’s sports receive 96% of TV airtime, the investors understandably see it as a more financially pragmatic step to invest in male athletes. However, trusting women’s sport as a whole and investing in them has demonstrated burgeoningly encouraging results.

When Nike took the risk and invested heavily in the United States women’s national soccer team (USWNT) for the 2019 FIFA Women’s World Cup, it recorded the highest sale of a particular home jersey. This simply goes to show that with a marketing strategy that is focused and precise, it is not a far-fetched dream to see women rub shoulders along with their male counterparts in setting the standards for sport on a global basis. 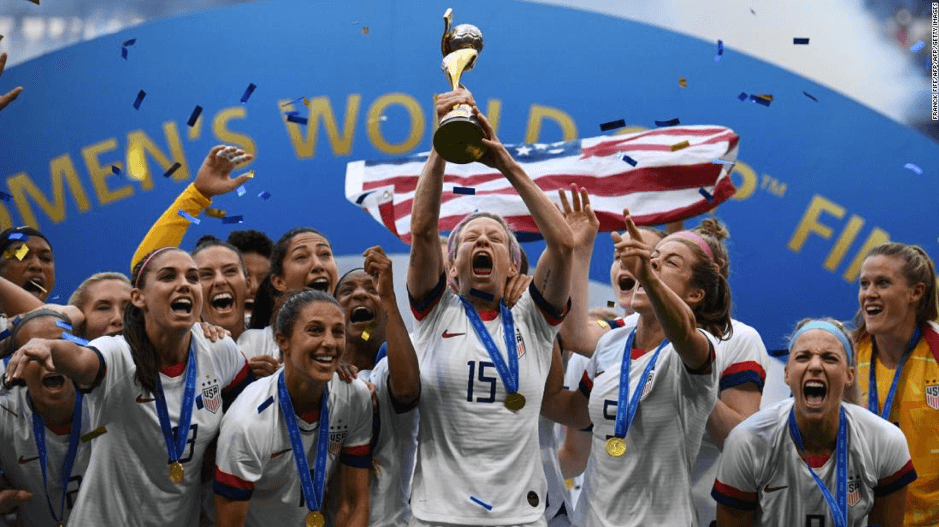 Dare To Shine: The USWNT shifted perceptions through their fight for equal pay, gender equality and their fairytale World Cup winning campaign, with Megan Rapinoe leading the charge both on and off the pitch

Unequal pay is just one of the injustices faced by female athletes. Their general treatment at competitions is deplorable to say the least. For instance, at the 2015 Women’s World Cup in Canada, players were forced to compete on artificial turf rather than grass, which is believed to have led to a lot of injuries. The players also had fewer rest days, had to live in poor accommodations and had to travel in economy class. This is in stark comparison to male footballers that often commute via private airplanes and reside in the most sought-after hotels in the world. The purpose is not to devoid male athletes of such comforts but to shine light on the shocking double-standards and to treat all world-class sportspersons in the same way as an unfair precedent has been set.

One can claim that it is not profitable and economically viable, but as American political scientist Francis Fukuyama rightly said: “A humiliated group seeking restitution of its dignity carries far more emotional weight than people simply pursuing their economic advantage”.

To show how the revenue debate is sometimes a facade, it would be pertinent to take the example of the US women’s national soccer team. For finishing 15th in the 2014 FIFA World Cup, the men’s team made 4 times than what their female counterparts accrued for winning the FIFA Women’s World Cup in 2015. This was despite the fact that the USWNT generated $20 million more than their male compatriots that year.

Then, after a complaint, a new labour deal in 2017 was signed which promised great strides in wages and better bonuses for women, details of which remained undisclosed. Overall, from fiscal 2016 to 2018, the women’s games generated about $900,000 more revenue than the men’s games.

However, things took a twist for the worst when 3 months before the kick-off of the 2019 World Cup, a class-action lawsuit was filed by the US Women National Team over ‘institutionalized gender discrimination’ against the U.S. Soccer Federation (USSF) where 28 team members of USWNT were named as plaintiffs. This lawsuit was not pettifoggery but the need of the hour. The lawsuit, inter-alia said: “A comparison of the women’s national team and the men’s national team pay shows that if each team played 20 friendlies in a year and each team won all 20 friendlies, female players would earn a maximum of $99,000 or $4,950 per game, while similarly situated male players would earn an average of $263,320 or $13,166 per game against the various levels of competition they would face”. It has also been alleged by the plaintiffs that they are paid just 38% of what their male counterparts make and are provided much less support, medical treatment, and coaching despite being wildly more successful than the men.

To see if their claim of being more successful is right, let’s compare how the 2 teams fared since the early 90s when the inaugural edition of the FIFA Women’s WC was held in China.

Apart from being the most successful team in the Women’s World Cup, the USWNT also won 4 Olympic Gold medals. It’s safe to say that they have all the bragging rights of being the most decorated team the country has seen represented at the sport’s pinnacle of events. The USMNT’s best finish in the FIFA World Cup came in the inaugural edition of the FIFA World Cup in 1930, where they won the bronze medal. For 40 years, from 1950-1990, they failed to even qualify. After this period of failure, lacklustre displays continued as they never managed to even reach the semi-finals.

In 2018, the USMNT failed to qualify after losing a match to Trinidad and Tobago, a team then ranked 99th in the world that have only competed in the World Cup once, in 2006. All these things enunciate that the allegations made my USWNT are not baseless.

The insouciant approach of USSF and other governing bodies only thwarts the growth of women in sports.

Apart from the likes of Megan Rapinoe, who occupy the uncontested place of prominence in the fight for equal pay, it would be apposite to mention another quintessential figure in this fight- Norway’s Ada Hegerberg, the first recipient of the Ballon d’Or Féminin (Women’s Ballon d’Or).

To ratchet up the rhetoric, she refused to represent her national side, alleging that women are not given equal opportunities. On the qui vive, the Norwegian FA signed an equal wage agreement where they announced that the remuneration pot for women is doubled, from 3.1 million Norwegian kroner (£296,000) to a total of 6 million kroner (£574,000). This includes a contribution of 550,000 kroner by the male players. However, she still relented, sending a strong message to the governing bodies across the globe.

It was not only the money that was bothering her but also the agenda against the women’s team. In an interview with ESPN, she said: “It’s the amount of respect and the fact that we’re equal in terms of conditions, the pitches we have, eating in the same canteen, and really taking a part in the club together with the men’s team.”

For the wage problem to be resolved, there is a sudden exigency to look into these micro-factors as well. It is not expected of the governing bodies and the corporates to be more enthused for the female events, but a little altruism on their part towards the betterment of women would go a long way.