3 REASONS WHY MADRID LOST TO CHELSEA 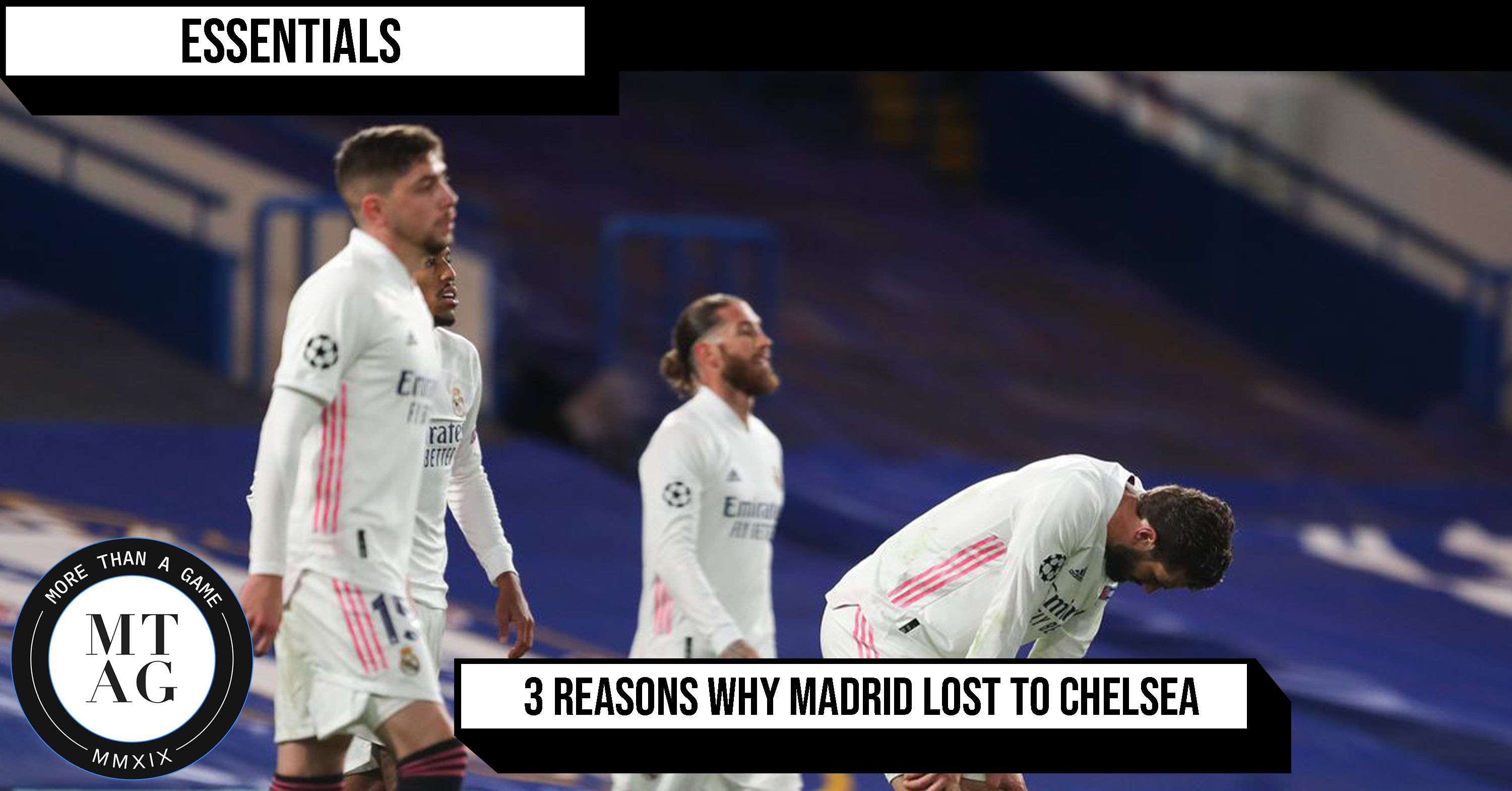 As Chelsea battered Real Madrid 2-0 to book their place into the Champions League final for the first time since 2012, what went wrong for the club that is built for the Champions League? Especially with Sergio Ramos, a man who revels in Europe’s elite competition and Eden Hazard coming back into the fold with a point to prove, Madrid were considered favorites despite getting outclassed in London.

We analyse the 3 reasons why Real Madrid couldn’t hack it against Chelsea.

Zidane did not learn from his mistakes

This may be one of Zinedine Zidane’s most appalling tactical set ups across two legs since he started managing Real Madrid. Coming into the 2nd leg, fans and pundits alike acknowledged that the Frenchman got his tactics wrong at home in an attempt to match Tuchel’s team man-for-man in a 3 at-the-back set up.

Due to this, when the teams sheets were announced, it was no surprise to see fans breathing a sigh of relief when the 3-time Champions League winner had decided to go for a standard 4-man defence. But the French gaffer never fails to surprise us and first minute in, we’re looking at a back 3 again with Vinicius playing in an unusual right wing-back role.

Zidane ultimately again fell into the trap of matching Chelsea’s line up – a very conservative approach in a match where your team has to score at least one goal against an extremely organized side. Los Blancos had a disastrous shape throughout the match. The back 3 looked very uncomfortable defending in transition and left huge open spaces, especially during Chelsea’s counter attacks.

The Blues attack opened up the Whites’ defence with ease on several occasions, creating some very dangerous chances. Having an xG of 3.56, this Chelsea team could have seriously hurt Madrid’s pride.

Apart from allowing the Galacticos to keep most of the ball, this god awful set up did not serve much purpose in attack either.

A tactical disasterclass from Zizou once again

The end of an era for Madrid’s top dogs

Much like Chelsea have young kings like Mount to lead the way, Madrid need the next generation to take over

As Mason Mount thrashed in the second goal that finally put the tie to bed, the Englishman’s goal wasn’t necessarily a dagger to the Madrid hearts. A week ago, as Pulisic danced around all of Madrid’s midfield leaving some of the greatest midfielders in the dust, it was an indication of something even more despairing than the prospect of going out in the semifinals. The clock’s run it’s course on Real’s rooster.

Madrid’s iconic trio in Modric-Kroos-Casemiro, found itself gasping for air under the pressure of an omnipresent N’Golo Kante. Rusty Ramos was out of pace and sync. For a team that has had no issues in luring global superstars to the Bernabeu, ideally you would expect the Royal Whites to reload the squad for next season.

Certainly not the easiest of tasks to pick talents who could step into the shoes of the stalwarts, but if you were to bet your house on any club in the world to pull it off, it would be Real Madrid. Whatever happens in La Liga this season and through the summer transfer window, tonight’s defeat certainly draws the curtains on the club’s finest period in modern football.

The Hazard homecoming was a letdown

Seeing Hazard was a huge sign of hope for the Real Madrid faithful. After suffering 10+ injuries during his 2 years at Madrid, fans finally saw the Belgian on the team sheet in a crunch tie.

His return to the Bridge, however, left everyone wanting for more. You can’t blame the guy – to perform against one of Europe’s best defences after returning from such a long injury layoff can’t be easy.

In the 15th minute of the match, Eden sent Jorginho for a hot dog with the cheekiest of body feints and every single Madrid fan had their eyes lit up, hoping for a vintage Hazard performance at his old home. What followed was an hour and more of anguish. Hazard dazzled in Chelsea blue and sent defenders packing for a living. Now, it’s like Real shelled the big bucks for his shadow.

After all, the once mercurial left winger was brought in to emulate Cristiano’s heroics in the Spanish capital.

Zidane’s tactical system did not help much either – which often saw Hazard isolated, with passing lanes to him tightly marked.

The Belgian international would be hoping that the Spanish press, notorious for their constant criticism of foreign big money signings do not make him the bad guy.

But if you’ve done your rounds on Twitter, an image of Hazard laughing alongside the Chelsea contingent has sent social media into a tizzy.