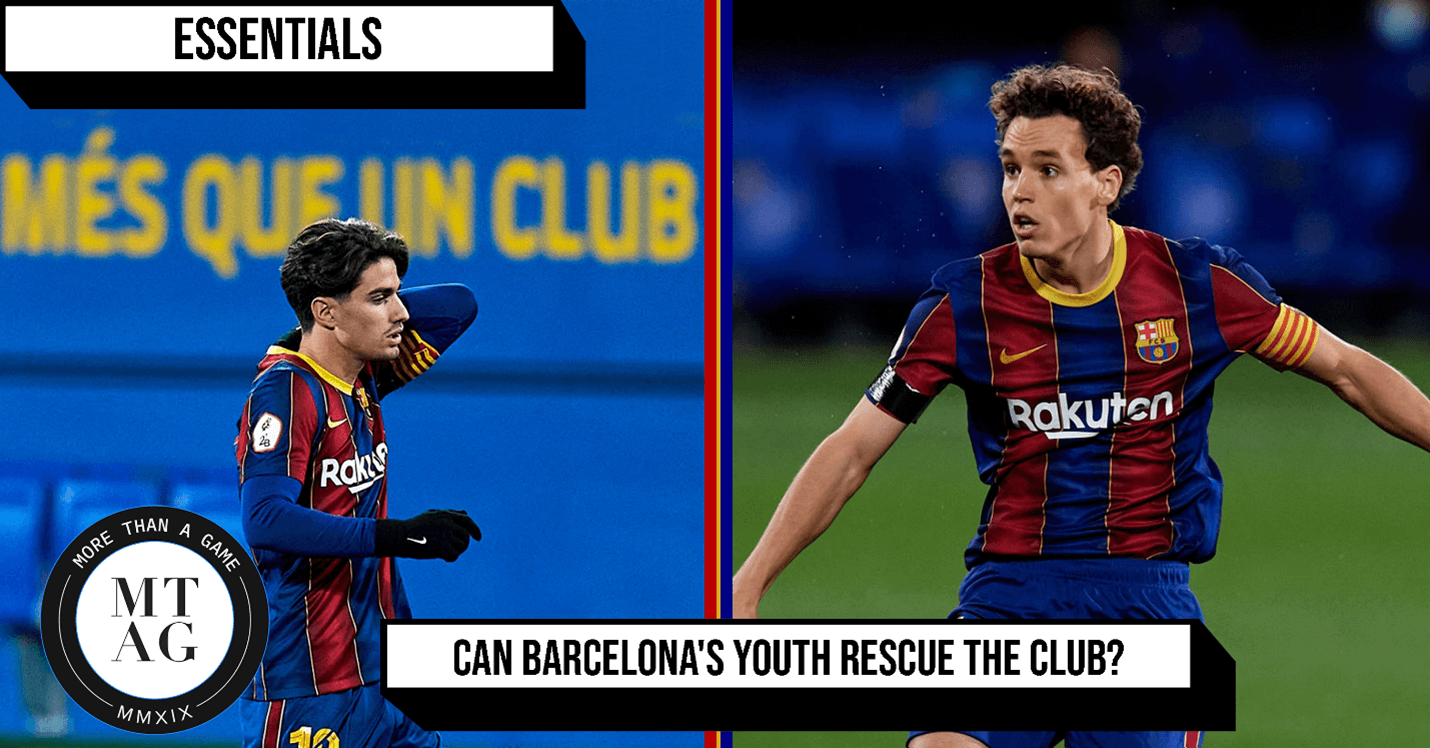 FC Barcelona are having what can only be described as their worst season in the last 10 years. Winning only 12 of their 20 league games, also finishing 2nd in their Champions League group stage for the first time in 14 years, this is far from vintage Barça. With a lot of financial problems and their old guard reaching the end of their careers, La Masia might be the club’s only chance at redemption.

Adding to the on-field problems, Barcelona have also been facing off-field problems with the iconic Messi interview with GOAL.com letting everybody know about former Barcelona president, Josep Maria Bartomeu’s countless faults. Bartomeu later resigned from his post but left Barcelona’s finances in disarray.

The Catalan club may well be unable to sign anyone next summer and therefore we decided to look at the most exciting prospects from Barça’s youth ranks who could play a pivotal role next season. For obvious reasons, we have chosen not to include the likes of Ronald Araujo and Oscar Mingueza who have already proven to become established starters for the first team.

In the words of Fabrizio Romano, here we go.

Ilaix Moriba is the La Masia graduate who has garnered the most attention in 2021 as he was called up to the first-team in a game against Granada following the departure of Carles Alena to Getafe on loan. He didn’t gather any minutes but seems to have impressed the gaffer Ronald Koeman in training as he was included in the travelling squad for the Supercopa de España as well.

Ilaix has been touted to be the new Paul Pogba ever since his displays started to turn heads as he boasts a very similar physique and playing style to the World Cup-winning French midfielder. Moriba joined Barcelona’s youth system in 2010 and had been given some stick as well as he doesn’t fit the billing of the typical diminutive, technically gifted Barcelona midfielder.

However, the Guinea-born midfielder has utilized his imposing physique to mold himself into a box-to-box midfielder. Alongside his ability to drive the attack due to his terrorizing runs, the 18-year old lad has shown a lot of grit and determination while tracking back and is a midfielder that ticks a number of boxes. To add to this, the young buck also possesses one of the most lethal right pegs that La Masia has seen in the last decade.

It’s only a matter of time till Ilaix Moriba has the world at his feet.

Álex Collado has made waves in and amongst the Barcelona ranks in recent months after having emerged in resurgent fashion after a serious injury at the end of the 2019/20 season. Luckily, the young Catalan was able to ward off his injury and return to play for Barça B, missing just 3 games at the start of the season. Collado is recognized as a right-winger who likes to drop deep to collect the ball and instead of driving at players, likes to create and control the attack in the final third. He possesses a killer left foot. Some would say his style of play is similar to that of a 6-time Ballon d’Or winner. Of course, there’s no prizes for guessing.

Similar to you know who, Collado is a recognized set-piece taker, taking testing corners and is on free-kick duties for the B team.

The 21-year old has already made his first-team debut as he played in a 2-0 loss away to Valencia in Quique Setién’s third game in charge of the Catalans. He only played 5 minutes and failed to make a memorable first impression other than a corner that reached Rakitic who failed to keep his header down.

However, that’s a small sample size to judge a player who is headed for the top.

Barcelona have been in the hunt for a player who’s worthy of replacing the ageing yet irreplaceable Sergio Busquets. It is a role that is impossible to fulfill for all practical purposes as has been proven by many players who seemed to be the backups for Busquets. Not to anyone’s surprise as Barcelona’s legendary No.5 is one of the modern era’s undisputed greats of the position. But the players who have come closest to Busquets’ playing style in the last few years have been Sergi Samper and now, Alejandro “Jandro” Orellana.

Sergi Samper seemed destined to succeed but injuries never allowed him to flourish. Jandro luckily has avoided such rotten luck and has benefitted massively last season as he was brought in to the B team as Oriol Busquets was shipped off to FC Twente in the Eredivisie.

Orellana’s profile is tailor-made for the first team and he has shown promise with his on and off-the-ball positioning and movement.

With Busi on the wane and Frenkie de Jong being pushed into more of an offensive role, Jandro could prove to be the final answer for a question that still waits to be answered: “how do you replace Busquets?”

Alejandro Balde is everything that you’d want from a full-back and more. Balde is a player who operates as a left-back and falls under the profile of a modern full-back, blessed with bags of pace who has a penchant for venturing forward, utilising his speed and skill to unlock defences. The full-back originally started at La Masia as a central defender but was quickly converted into a left-back and he has shone. However, what the 17-year-old has that sets him apart from his competition is his physicality.

For a lad his age, Balde’s certainly physically ready to compete with the big dogs. With Jordi Alba ageing and becoming prone to mistakes, Barcelona have been searching for a probable replacement, having tested the likes of Lucas Digne and Junior Firpo, both of whom failed to really make a real impact. Balde’s promotion to the first team looks imminent with Firpo likely on the way out and he may just be the answer.

Barcelona for the last 3 years have lacked an out and out winger who could run the defence ragged when need be. This lack of profile cost Barcelona in their search for their 6th Champions League title as they were knocked out by the likes of Roma in 2017/18 and Liverpool in 2018/19 in historically embarrassing fashion.

Konrad is the typical wideman that gets you off your seat with brilliant bursts of pace and quick feet at his disposal. However, he also possesses a powerful right foot.

The Miami-born winger generally prefers to play on the left side of the attack, however he has often played on the right-hand side as well and has taken to both flanks like a duck to water.

The 19-year old became only the second US international after compatriot Sergiño Dest to earn his stripes for the Blaugrana first-team. Konrad made his first-team debut against Dynamo Kyiv in the Champions League as he came on for the last 10 minutes of the game and with the boy’s precocious talent, Barcelona may likely not have to spend a dime to acquire a player who may well be a superstar in the making.