5 THINGS WE LEARNED FROM MANCHESTER UNITED VS PSG 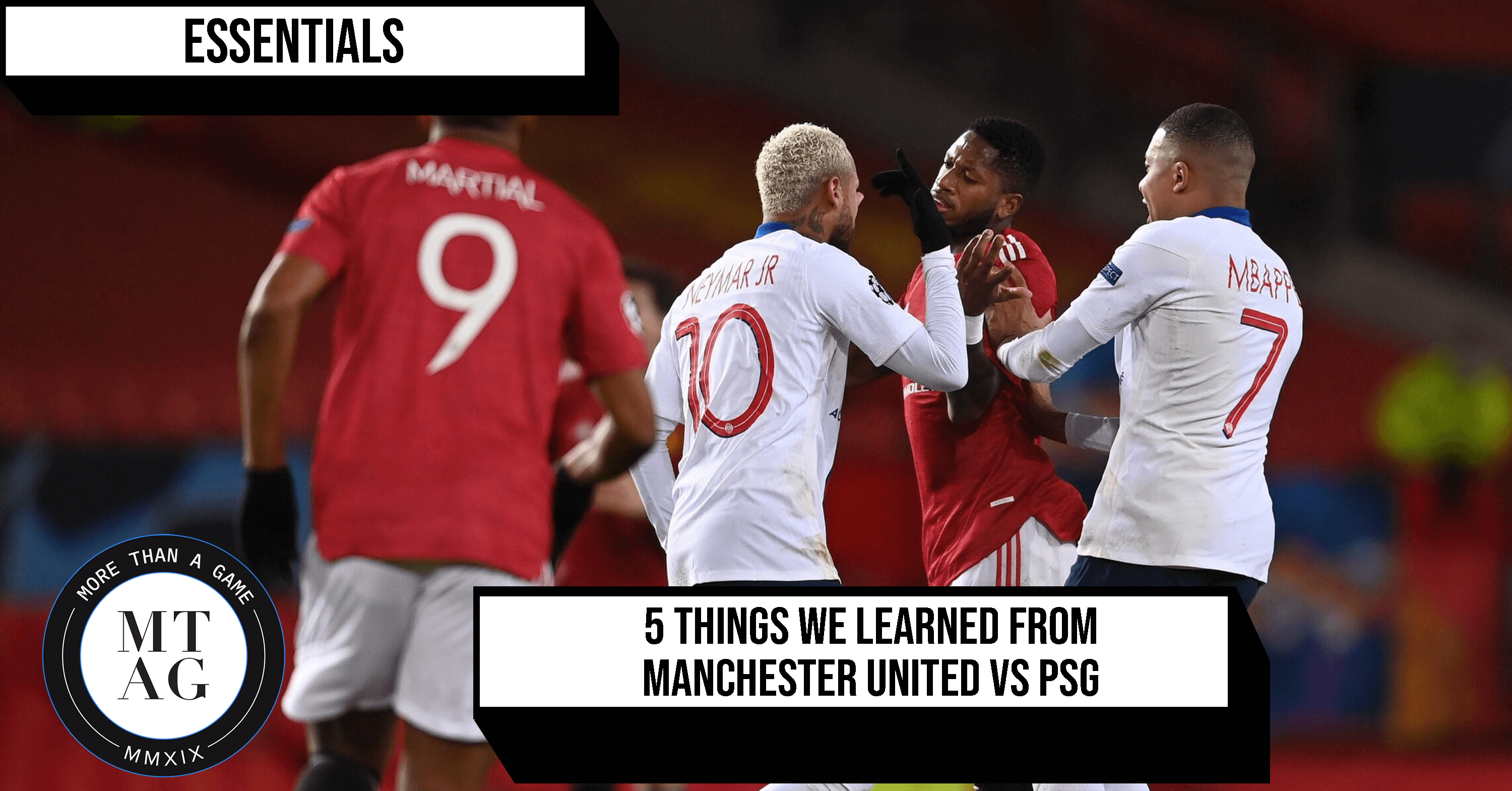 It’s safe to say we saw it all at Old Trafford last night, from Neymar’s heroics to a red for Fred. With PSG looking dead and buried in Group H of the Champions League, they desperately needed and result and after riding their luck, courtesy of Manchester United’s dismal finishing, they ended up as 1-3 winners away from home.

Here’s the 5 things we learned from last night’s headliner clash.

We saw the best and worst of Neymar

At his best, he’s so good that you’d assume he’s almost playing a different sport to the other 21 men on the pitch. At his worst, he’s the lad who takes his ball home when things don’t go his way. Over the 95 minutes of football, we saw both sides of Neymar.

The Brazilian has never been short of confidence and as soon as the ref blew his whistle, Neymar was up to his old tricks. Much like how an old school centre-half will “let you know he’s there” by pushing and shoving the No.9, Paris’ most priced asset since the Eiffel Tower will pull out his bag of old party tricks to remind you that the hype is real. It took just 6 minutes for Neymar to volley PSG’s opener past David de Gea and to prove the initial threats posed by him were far from empty.

As the game wore on, so did Neymar and after making a meal out of a Scott McTominay challenge, followed by a series of unnecessary altercations with the Scotsman, the former Barça man fell for the bait and lost his head. From then on, he almost took it upon himself to take on McTominay and leave him for dead and came out second best.

Fortunately for Neymar, he is ridiculously gifted at football and after dancing past Bruno Fernandes and leaving Harry Maguire split like a banana to eventually register a brace, here was another example of why if PSG’s main man just keeps things simple, you can’t stop him.

As iconic as the mascot for the Mancunian side is, Fred’s abrasive and reckless game on the night was anything but that. A headbutt in the 23rd minute might still qualify as the conspiracy theory of the year as to why he wasn’t shown the red right there and then. If the Video Assistant Referee’s input wasn’t enough, on-field referee Daniele Orsato also had the chance to replay the footage on the pitch side monitor. As if pardoning Fred for a sinister shank of his head, he was merely cautioned. Zizou must be fuming.

A few minutes more and the Brazilian midfielder also happened to clip Neymar’s ankles in an attempt to snatch the ball and as if riding on a spree of December luck, he still stayed on. But as if poetic justice, Fred was shown the red card in the 70th minute following what might qualify as a fair challenge. Parisian ultras might argue that it should’ve been done way before but given the horrible show of refereeing tonight prove that two wrongs do not make a right.

OGS too is at fault, an early second half or even a half-time substitution to replace the Brazilian would’ve kept his side in the game, given the utter randomness of the game tonight and who knows, they even might’ve nicked a winner.

I refuse to believe there’s one Manchester United fan who wasn’t calling for a precautionary substitution at half-time to avoid exactly that.

One can only imagine the scoreline had Fred been sent off in the first half itself.

Martial isn’t cut out to be Manchester United’s No. 9

When the French international picked up his No. 9 shirt post Zlatan’s cameo, pundits, coaches and fans tipped him to bulge the net every other game, become the goal-machine Old Trafford was screaming out for. To lead the line for a club as massive as United, one needs to be an assassin in front of goal. Anthony Martial looks the part in his black gloves but lacks the weaponry and since the start of this season, you might even be led to believe he lacks the skill to operate the artillery.

Hopeful romantics had dubbed the ex-Monaco star to be the second coming of Thierry Henry but his effort to pick out the stars when the ball is put on a plate for him put the final nail in the coffin for that debate. And once again, he was firing blanks after a vintage onslaught on the break from United.

If there was any award for being disinterested while playing football, Tony would certainly bag that and by the look of things, it might be the only individual honour he picks this season. Manchester United hope to return to their former glory, to challenge domestically and in Europe, but Anthony Martial isn’t the no. 9 they deserve, nor the one they need.

Touching down in gloomy Manchester, the Parisians would have hoped for two things (excluding a win) to make their trek worth it- an early goal and Neymar and Mbappé to turn up. And 6 minutes in, they couldn’t have asked for more.

Yet, PSG proved once again that they’re their own worst enemies in the Champions League, putting their foot off the gas and letting United back into the game, albeit Rashford’s goal was fortunate to say the least. To add to their woes, Fred’s headbutt was as clear a red card as you’ll see and Thomas Tuchel’s men were unlucky with the decision.

But there’s two ways of looking at this- you either moan about it and lose your heads or you see it as a way of channeling your aggression where it matters the most, prove why you’re the team with more quality and also get into Fred’s head because a sending off was waiting to happen.

The last one did come to fruition eventually but after the decision went against them initially, PSG simply couldn’t get over it and looked too lost for the fight and to limp to stay in it.

If United didn’t give us a lesson in dire finishing, we’d see the Champions League finalists get the most embarrassed on the European stage since La Remontada.

United are more than just a counter-attacking side

Regardless of a heavy loss taken at home, Ole’s men did show some spirit to get back in the game after conceding first. Criticized, but also lauded for being an exceptional unit on the counter, it really doesn’t take a genius to outclass Manchester United nowadays. PSG are a wondrous side with wizards lining up for the French outfit with players born to entertain. Despite this, the Red Devils did manage to keep the Parisian club at bay for the best part of 70 minutes.

The story spun a red card later but probably the only positive to come out of this game for the Old Trafford faithful, is the expansive, natural and free flowing football that Manchester United grew into throughout the game, till Fred happened. On the back of an exciting comeback in the Premier League against Southampton- maybe, just maybe, Ole’s onto something here.