AUSTRALIA VS INDIA: HITS AND MISSES 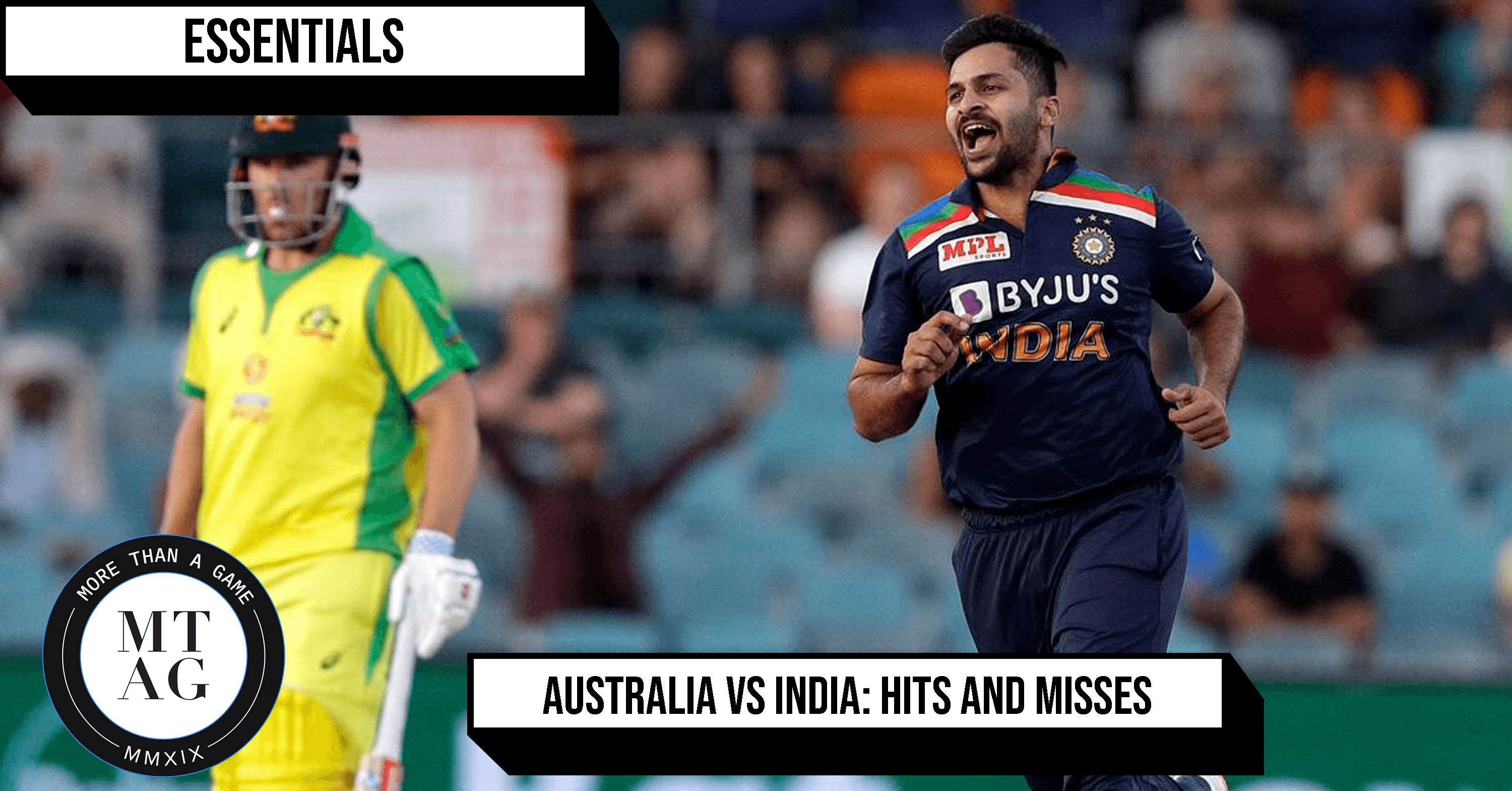 Let’s face it, everyone considered this one a dead rubber as Australia wrapped up the series and it was a cakewalk if we’ve ever seen one. But when it is Australia vs India, friendlies aren’t very friendly and dead rubbers still have some life in them.

The Aussies looked to collect more points for the ICC Cricket World Cup Super League while Virat Kohli’s men had restoring pride on their agenda after getting hammered by the hosts in the first two matches. Promising players such as Cameron Green and Thangarasu Natarajan were making their debuts as both teams made substantial changes to the playing XI’s.

As India finally came out on top in a game that swung both ways till the end, here’s looking at the hits and misses from a tie where the Australians got done, for once.

When India lost Kohli in the 32nd over, it once again looked like a ship waiting to sink on Australian shores. After winning the toss and choosing to bat first on a batting track, each one of the Indian batters got starts but threw their wickets away. Australia looked in total control and getting Kohli out as the 5th wicket was the icing on the cake. However, the all-rounder extraordinaries amongst the Indian collective had other ideas.

Hardik Pandya, who was already having a brilliant series with the bat, started in composed fashion. Similarly, Ravindra Jadeja on the other end steadied the ship and kept the scoreboard ticking. While Pandya still played his natural game from time to time, his partner assumed a bit of an unnatural role- defending to keep the team in the game.

Post the 40th over, both batsmen decided to go for the kill and executed it to perfection. Keeping the memories of the 2017 ICC Champions Trophy aside, the duo played brilliantly in tandem and attacked the opposition from both ends. Both Jadeja and Pandya looked in sublime touch, weaving an unbeaten partnership of 150 runs as they helped India reach the score of 302 for 5 in the 50 overs.

As we said- all-rounder goals.

Another one for Shardul Thakur ☝️

Shardul Thakur has played a fair share of matches for the country where he has been a decent performer but we’re yet to see him rip up any trees to be as blunt as can be. As everyone had their eyes set on the debutant Natarajan, it was Thakur who stole the show on a bouncy Manuka Oval track. Taking the ball after both Bumrah and Natarajan had bowled on the wicket, the Chennai Super Kings pacer kept the ball in the channel, constantly being a thorn in the side for Finch and Smith.

Thakur did get Smith on a loose one but that doesn’t change the fact that he was sensational all day long. He changed his pace brilliantly and used the cross-seamed ball to perfection, niggling it away from the batsmen and being a constant menace, taking 3 wickets in the process. Combining with Bumrah, who showed signs of the old speedster we know, Shardul took the game away from the Aussies in fine fashion.

Even on an off day, the Aussies refused to fold

The hosts had already thumped the Indians in the previous two matches and coming into this contest, they didn’t have anything at stake. While they made a couple of changes and took the experimental route, one cannot fault Finch’s men and their commitment to the cause.

Speaking of Finch, the Aussie skipper once again showed his class up the order as he waited for loose deliveries and gave them the punishment they deserved, scoring a well-deserved 75 off 82 deliveries.

Maxwell took a page out of his captain’s book and went all guns blazing, looking set to take the game away from India before Bumrah got him with a snorter and swung the match in the other direction. Adam Zampa and Ashton Agar were the top performers in the bowling department for the hosts as they halted the flow of runs in the middle overs and made it difficult for the Indian batsmen to rotate the strike.

Australia might have lost the game but they proved that even on an day where they aren’t at their bludgeoning best, there’s bags of potential on the bench and can push any team in the world to the wire.

Replacing Mitchell Starc in the side isn’t an easy job. Sean Abbott was selected to do that very job for the Aussies and he proved to be quite expensive as the Indian batsmen, especially Jadeja took him to the cleaners in the death overs. Playing just his second match after making his debut in 2014, Abbott started in brilliant fashion as he got rid of Shikhar Dhawan. Things were looking great for the Australian seamer until the point where he started experimenting too much with his pace and bounce, which made him rather predictable for Jadeja to read, attack and exploit.

Abbott will look to make a strong comeback in the upcoming T20 international series and show what he is capable of both with the ball and the bat.

Shreyas Iyer is one of the best batsmen in the country and seemed to have ended India’s seemingly never-ending conversations about the No.4 position. However, as things stand, the problem still persists.

Manish Pandey could’ve been given a nod ahead of Iyer in this encounter but Kohli put his trust in the Delhi Capitals captain, considering he is touring Australia for the first time in his career. Iyer has looked in good touch when he has played with composure but has thrown his wicket away by playing unnecessary shots and has cut an impulsive figure throughout the series.

The stylish customer will need to find his groove and fast. Things move extremely fast in cricket and especially Indian cricket and the last thing he wants is the jury to be out on him.

Death bowling- a rare chink in the Australian armor

Despite taking Kohli’s wicket, even Hazlewood wasn’t at his best today

Apart from their talisman Josh Hazlewood, death bowling looked far from being a strong suit for the Australians. Every bowler, be it be Pat Cummins, Mitchell Starc or even Sean Abbott was taken to the cleaners by a misfiring Indian line-up, especially Hardik Pandya. Even though the Aussies won the series, they will be looking forward to work on their death bowling to restrict the batsmen.

Kane Richardson’s absence has been a big blow for the side but with the kind of performances they are putting up as team, they will surely come up with answers to their death bowling problems as well.