BARCELONA VS JUVENTUS: Ws AND Ls 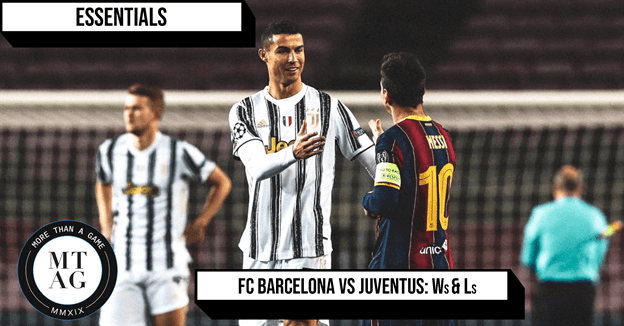 The headline may say it was Barcelona against Juventus but to anyone watching, it was Messi vs Ronaldo once again. The last dance potentially as the world had the fortune to see the modern era’s two greatest footballers battle it out for 90 mins, once again. And while Cristiano Ronaldo was the victor on the night, this isn’t to take away from the fact that Lionel Messi dragged his team throughout the contest, albeit having a support cast that tends to disappoint.

As Juve cruised to a 3-0 win and topped Group G of the Champions League, here are our Ws and Ls from the clash.

If you love the beautiful game, you were gutted about Cristiano Ronaldo being out of action against Barcelona after testing positive for COVID-19 back in October. But if you know anything about the great man himself, his brace last night came as no surprise. Sure, there will be the usual sceptics out there that will brush aside Ronaldo’s goals as being mere penalties. Rest assured, these same people don’t convert from the spot when they’re kicking ball the park.

With all eyes on you and a certain another superhuman once again, despite never leaving any room for any doubts through sheer performance, the Portuguese captain had to remind the world why he banking on him still remains a safe bet at 35 years young. If the first penalty was as calm and collected as can be, straight down the middle, the second one sent ter Stegen the wrong way as Ronaldo delivered in emphatic fashion.

42 years young. Yes, you read that right. In a career as short as that of a professional footballer, goalkeepers tend to peak as well as survive in the game later than their compatriots. However, to remain the No.1 at Italy’s biggest club at 42 years of age is beyond ridiculous. And to make 7 saves and keep Messi out when he had his eyes and foot set to ripple the net can’t really be put into words.

The vet is a year older than his gaffer in Andrea Pirlo but in between the sticks, he’s still the wide-eyed colossus that kicked things off in Parma.

Age really is just a number.

Ever since rekindling his love affair with the Bianconeri, Alvaro Morata has proven why he’s so much more than just putting the ball in the back of the net. Not that he’s shabby in front of goal, with only Erling Håland scoring the same number of goals in the Champions League this campaign (6). After his underwhelming stints at Chelsea and Atleti, the questions were justified but the Spanish No. 9 has brushed them aside this season.

Starting in a front two alongside Ronaldo, Morata tirelessly ran the channels, dropping deep and being incredibly involved in Juve’s build-up and while he’s at it, putting on a hold-up play masterclass. The prospect of getting stuck in and playing these roles wouldn’t appeal to the striker that would simply rather tap the ball in beyond the ‘keeper. But not every striker is as unselfish as Alvaro Morata.

This was a display similar to his brilliant outing against Germany in Spain’s 6-0 mauling in the Nations League. Unlike that game however, Morata couldn’t get his name on the scoresheet but boy did he deserve to.

Once again, Messi was left to do it all alone

Lionel Messi has been known to change games on his own for over a decade now. However in the last few years, he hasn’t had any help in the Champions League from his teammates. It’s been a case of ‘just let him do everything’ since Neymar left to go to the French capital. We’ve seen the collapse at Rome and Anfield and the humiliation in Lisbon. Once again, Messi was left to do it all on himself.

The Argentine had 7 shots on target, created 3 key passes and also, quite surprisingly had 5 ball recoveries. However, he was denied by a spectacular Buffon multiple times. Messi was probably the best player on the pitch, only helped by the 60th minute substitute, Riqui Puig.

Messi looks tired and burdened, but can you blame him?

Koeman is his own worst enemy

Koeman’s disapproval of Riqui Puig’s involvement in the side has been well-known and discussed since the start of his reign at Barça. However, if the Dutch coach has any serious interests in winning with the team, he will have to realize what was clear as day- Puig is Barcelona’s best midfielder.

As soon as the Catalan midfielder came on, it was like Barcelona was the team winning cruising with 3-goal cushion. The way Puig helped them play around and into Juventus’ penalty area with ease, always being available everywhere for every pass and pressing relentlessly, the 21-year old was immense. In his tireless pursuit, he forced Juve into three errors, two from Danilo and one from Rabiot.


Puig solved several issues Barça faced in the first half. Juve’s low and tight block made penetrating them very difficult. However, Riqui’s introduction pulled apart Juve’s midfield as spaces start to open up for the likes of Messi and Braithwaite to exploit.

The two changes Koeman did however failed to make any sense. Ronald Araujo started the game in front of the in-form Óscar Mingueza and even though the former is the more senior defender of the two, he returned to fitness just 3 days prior to the game. Starting a rusty young defender in a game as high profile as facing a Ronaldo-inspired Juve is as poor as not playing a defender at all. Another mistake was starting Trincão in front of Braithwaite.

The former Holland manager decided to break up a formation as well as a partnership that had been working for the past few weeks between Griezmann and Braithwaite. Barcelona lacked pace up front and a natural striker as Barcelona’s only main targets, for the crosses the pinged in the first half were 5’9” tall Griezmann in addition to Messi and Pedri at 5’7”.

2 – Barcelona have conceded two goals in the first 20 minutes of a Champions League home game for the first time ever. Shock. pic.twitter.com/ojyyDDIvYW


At a time when Clement Lenglet should have been Barcelona’s commander in defence, he has become the committer of mistakes. The Frenchman made his third mistake in four games as he had a moment of confusion as the ball struck his hand, taking it away from Weston McKennie. Lenglet was Barça’s only fully fit, first-team centre-back for the last 5 weeks and yet has been outperformed by both Mingueza and an out-of-position, de Jong.

He failed to take control at the back yet again as Barcelona gifted two penalties and one free goal to McKennie as nobody seemed to want to track his movement. Ter Stegen had a very quiet night as there was nothing he could’ve done as Juventus were clinical and finished their only three real chances.

Lenglet was subbed on for Umtiti as he returned from injury and looked fairly confident and in much better shape than his French compatriot. Going forward, depending on his fitness, Umtiti could be Koeman’s bet alongside Araujo or Mingueza as Lenglet may struggle to keep his place in the side.