BELGIUM VS ENGLAND: Ws AND Ls 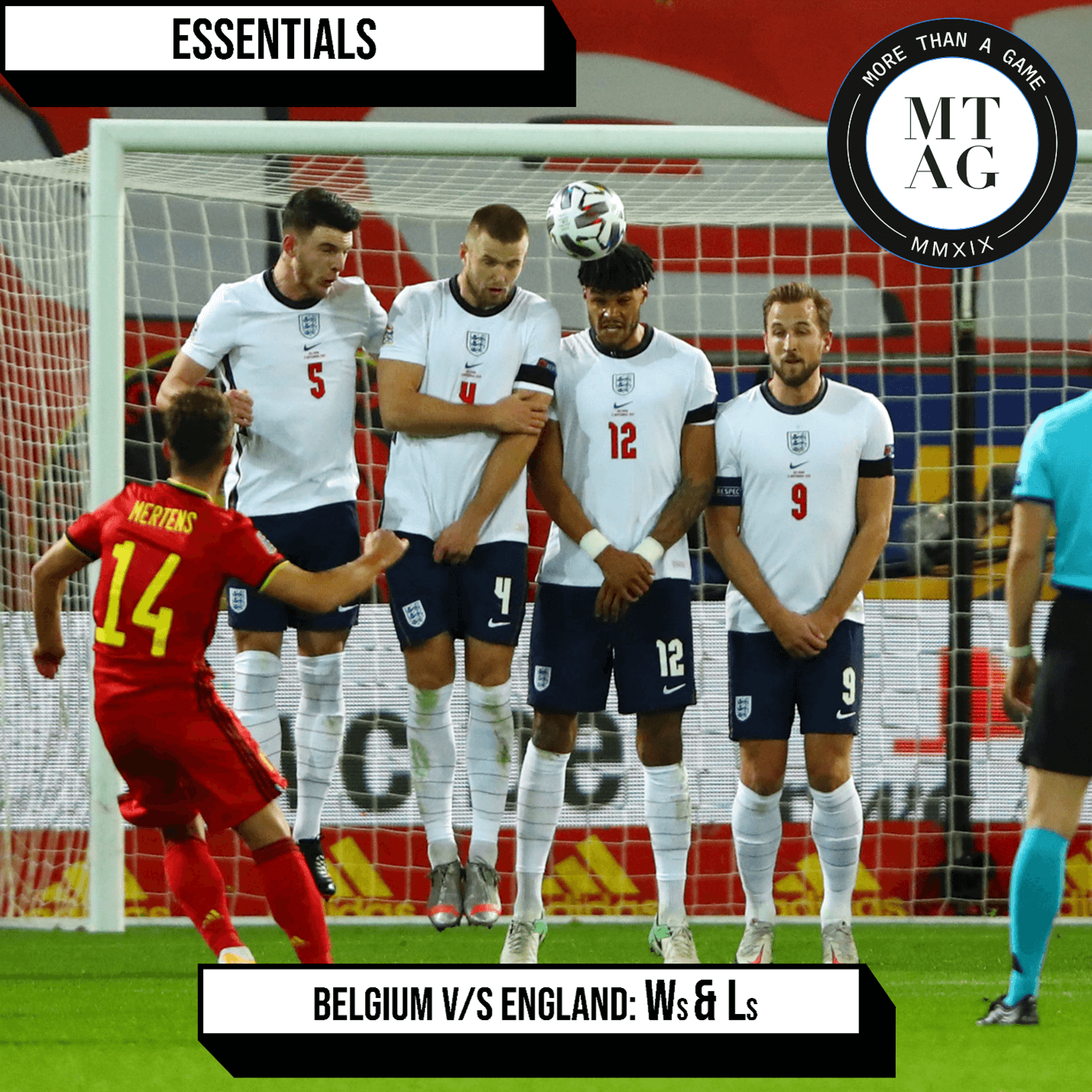 You’re hoping for an exhibition of greatness when Belgium and England are involved, considering the caliber of players on show but you’d also be left feeling disappointed. As the Red Devils stuttered towards a 2-0 victory, it was a bizarre game where dominance never translated to putting on a show for either side. Saying that, Youri Tielemans’ finish was class, Dries Mertens’ free-kick was phenomenal and the moments of magic from Jack Grealish made sure there were splashes of pure class on that pitch.

As England’s hopes of topping the group and reaching the Nations League Finals have been ended by the Belgians, here’s dishing out the Ws and Ls from the clash.

Clinical: Belgium in a nutshell

Belgium got off to a great start within 10 minutes as Youri Tielemans’ deflected shot, that was deflected off Tyrone Mings went in off the post past the outstretched hand of Jordan Pickford. This was Roberto Martinez’s side’s first attempt at goal. This came to fruition after a loose ball by Eric Dier was intercepted by Belgian captain, Jan Vertonghen. Wonderful holdup play from Romelu Lukaku allowed Tielemans to get into position before striking the thunderous shot to send the Red Devils into the lead.

The Belgians kept up their 100% conversion rate as they scored with their second shot of the game, a stunning freekick from Dries Mertens from about 25 yards out. It was an unstoppable shot over the wall to the right of Pickford, who couldn’t have done anything. After this initially flurry of goals, they could sit back and protect their lead.

Ice-cold in front of goal.

Grealish was the best player on the pitch

Images of Jack Grealish laid down on the street in 2015 did it’s rounds and public perception was that this was the age-old story of an English footballer getting too big for his boots and throwing his talent away. Cut to 2020 and there’s a strong argument to be made for the Aston Villa captain to be hailed as the best player in the Premier League on form. Against Belgium, it showed once again and the lad was on the losing side.

As per, Grealish was easy on the eye, gliding past his opponents like they weren’t there. You’d imagine he would be unplayable if either of Sterling or Sancho had started the game because England lacked any genuine runners behind Belgium’s backline that could make them look over their shoulders. As is in the Prem, Grealish was hacked down incessantly; precisely, a staggering 7 times, which is the most in an England game since Kane against Colombia at the 2018 World Cup.

Belgium had no answers to the boy’s wizardry and he has proven once against that he really is one of the best dribblers on the planet.

At this point, based on merit alone, Southgate needs to build the side around Jack Grealish. The Villa man is unplayable. If you don’t believe us, that flick he did over Meunier should convince you.

The Belgians started the game with a 3-man defence with Thomas Meunier and Thorgan Hazard as their wing-backs. It is a formation that is Martínez tends to prefer and once again, it worked very well defensively. England only created one proper chance via a Kane header which was cleared off the line by an alert Lukaku.

All the other chances created by England failed to trouble Courtois, much as the likes of Mount and Kane were kept under control by the defence. While Denayer and Vertonghen were solid as rocks, a special mention must go to Toby Alderweireld who rolled back the years to put in a vintage display.

The three men at the back had some work to do as Belgium failed to control the midfield but were brilliant in keeping England at bay.

We need to talk about Southgate’s tactics

Much like Mikel Arteta, Gareth Southgate tries to compensate for a shoddy backline by playing 3 at the back. The lack of chance creation is where the binding factor is between both sides and for an English side that is riddled with raw prospects and finished articles, both elite, the brand of football is far from it. The one thing you can say about Arteta is that he plays natural centre-halves in his back 3 while Southgate chose to start Kyle Walker and Eric Dier. To make things even more absurd, Conor Coady, perhaps the centre-back most fit for the system warmed the bench.

There’s questions galore and they seemingly never cease to exist when talking about a gaffer whose vision looks to get more muddled, the more you watch his team in action. You put an end to the Grealish v/s Mount debate by starting the latter as a right-winger, despite his troubles there this campaign. If 5 defenders aren’t enough, how does a double-pivot of Rice and Henderson sound? When a central midfielder does come onto the pitch to spark things into play, it’s Harry Winks of all people who has never profiled as an attacking midfielder.

If England were sloppy defensively, they were clunky going forward in the 1st half. You’d think they are set up to play on the counter, the way they sat back and waited for Belgium to make an error instead of ever even trying to press. A glance at a front 3 of Grealish, Kane and Mount and one realizes that the one thing you need to cause havoc on the break is missing: pace. We’re all scratching our heads.

This wasn’t the worst English performance by any stretch but Southgate’s been having ‘mares for a while now.

A rare off night for the Belgian midfield

Belgium was very much the better side coming into the game with a tried and tested setup while Gareth Southgate still looks to find the perfect balance. Everybody expected the Red Devils to control the running of the game with England starting with a double pivot of Henderson and Rice. However, both Kevin de Bruyne and Axel Witsel failed to find their rhythm as England controlled much of the game, especially in the 2nd 45.

Witsel misplaced a few passes too many which tested the Belgian defence on the counter. In terms of chance creation and keeping the ball as well, questions need to be asked. As Belgium inch closer to qualification from their group, they will have to regroup and get back their rhythm.

Too many unforced errors at the back

If Dier’s lackluster pass wasn’t poor enough, which ultimately led to Belgium’s opener, the Spurs man continued to be a klutz with the ball at his feet. The same can be said for Walker, who seems to have not recovered after the Mané incident at the Etihad as he misplaced a number of passes and when he would occasionally foray his way down the right-channel, nothing was coming off for the seasoned defender.

The 2nd goal was unfortunate, considering Rice hadn’t fouled KDB and Mertens pulled a worldie out of the bag but with the unforced errors and straying away from successfully passing the ball out of the back, work needs to done to iron out these mistakes.

Just in terms of fitting these ball-playing abilities, the likes of Maguire and Coady fit like a glove and you’d hope that’s something Southgate has taken into consideration.