Bianca Andreescu: Against All Odds

“When the 2019 edition of the US Open commenced, most tennis fans were hoping to see any two of the men’s trinity grace the final, a women’s encounter similar to Wimbledon 2019 between Simona Halep and Serena Williams or maybe even an upset from Ashleigh Barty or the defending champion, Naomi Osaka. Rafael Nadal did conquer his 19th Grand Slam title after defeating Daniil Medvedev in a gruelling final, but it was someone else who stole the show.

Andreescu started playing tennis at the early age of 7. Born to Romanian parents, Nicu and Maria Andreescu, who shifted to Canada in 1994 and settled there. During her childhood days, she idolised Kim Clijsters and loved her style of power play.

Taking these lessons into her stride, Bianca made her International Tennis Foundation (ITF) debut in the year 2015, with her first ITF career title coming in 2016. At the Gatineau 25K tournament, she defeated Elizabeth Halbauer to achieve this feat. She also won the Gatineau doubles title with her partner Charlotte Robillard-Millette. In September at the US Open, Andreescu had her best run at a junior Grand Slam, reaching the semi-finals in singles and quarter-finals in doubles.

In 2017, she made her WTA debut and played in the junior Grand Slam championships. She competed in the Australian Open, French Open and Wimbledon but was eliminated in all three tournaments. However, there was light at the end of the tunnel.

At the Citi Open in August, she was awarded a wild card for the main draw. Grabbing the opportunity with both hands, she defeated Camila Giorgi in the opening round to register her first win on the WTA tour. In her next match, she ousted the-then No.13, Kristina Mladenovic, becoming the first player born in the 2000s to beat a top 20 player. Later, she was defeated by Andrea Petkovic at the quarter-final stage of the tournament.

The year 2018 was an injury-hit year for the Canadian, where her bad back forced Andreescu to take a break till November after representing Canada in the Fed Cup in April. This was after she had won the deciding doubles game alongside her compatriot Gabriela Dabrowski and helped her team to advance to World Group II.

Then came the breakout year-2019. At her first event of the year, the ASB Classic in Auckland, she qualified for the main draw. After this, she went on to beat the first seed Caroline Wozniacki, the 6th seed Venus Williams, the third seed Hsieh Su-wei and reached her first ever WTA singles final where she was eventually defeated by the defending champion Julia Gorges.

However, Andreescu managed to secure her first WTA 125K title at Newport Beach in January, which catapulted her to a career-high ranking of No. 68. In the process, she also passed Eugenie Bouchard to become Canada’s top ranked player.

Andreescu had a breakout tournament at the Indian Wells Premier Mandatory event. She defeated Irina Begu, followed by a win over Dominica Cibulkova. The Canadian put Stefanie Voegele to the sword and then the 18th seed, Wang Qiang to reach the quarter-final after bettering the former No. 1 and two-time major champion, Garbine Muguruza in straight sets.

Carrying her good form forward, she then defeated the 6th-seed Elina Svitolina in three sets in what turned out to be hard-fought match, becoming the first wild card to reach the finals in Indian Wells history.

In the final, she won in three tight sets over Angelique Kerber for her first WTA tour title. With the win, she made a big jump in the world rankings to 24, a new career high.

She then returned to play in her home tournament, the 2019 Rogers Cup, Toronto. Andreescu reached the final of the tournament where she faced Serena Williams, who unfortunately was forced to retire due to back spasms when she was 1-3 down in the first set. This gave Andreescu her second WTA tour title and new career high-ranking of 14.

And then came the big stage; the 2019 edition of the US Open. Enter a Bianca Vanessa Andreescu in the form of her life.

Andreescu started her campaign against Katie Volynets with a relatively easy 6-2 6-4 win. Then in the 2nd round, she defeated Belgian Kirsten Flipkens 6-3 7-5, to make her way into the 3rd round. She squared up against 19th-seeded Caroline Wozniacki, who wasn’t able to put much of a challenge and lost 4-6 4-6. Two three-setter wins against the American Taylor Townsend and Belgium’s Elise Mertens saw her fix a semi-final clash with the 13th-seeded Belinda Bencic

Andreescu showed nerves of steel and won the game 77-63 7-5. And then came the final opponent, the legend of the game, Serena Williams.

While the whole Arthur Ashe Stadium was backing Williams to win her record 24th Grand Slam title, Andreescu had other ideas. She decimated Williams in the first set by a scoreline of 6-3 and led the second set 5-2. With the final almost in her grasp, Andreescu was hoping for no comeback miracles from Serena. But Serena being the player she is, fought back to level the set 5 games apiece.

Everyone would have imagined that the youngster would succumb to the pressure and make it easier for Williams to bounce back, but the Canadian held her nerve.

She won the second set 7-5, winning the biggest tournament of her career. With both women going toe-to-toe with power, matching each other for intensity, it seemed as if both Williams and Andreescu were the spitting image of each other’s style of play. 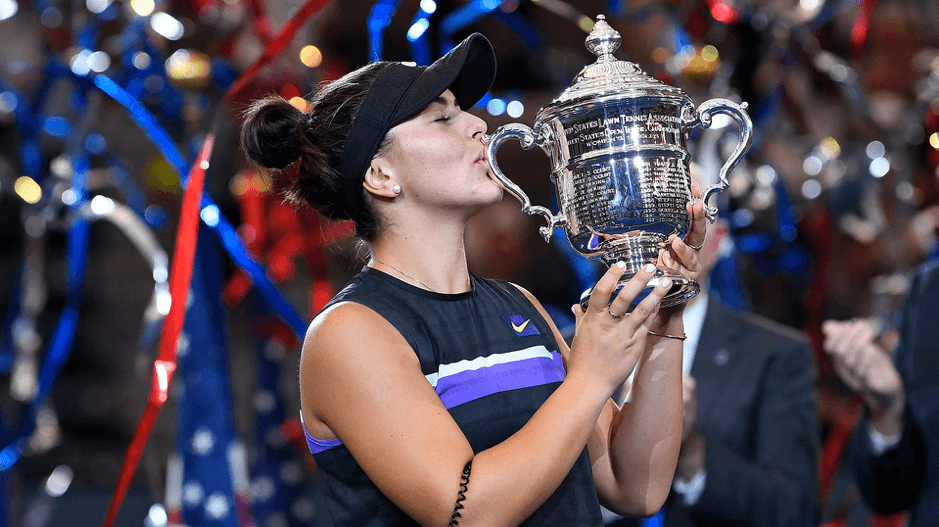 History Maker: Andreescu defeated Serena Williams in the US Open final to become the first woman born in the 2000s to achieve this feat (Aires de la Ciudad)

While commentating, the legend Martina Navratilova noted, “Everyone knows how to bang the ball; it’s when you bring something extra to the table that makes all the difference, and Andreescu brings a lot extra on the table. Think the variety of Martina Hingis, but with more power.”

Andreescu typically employs aggressive cross-court strokes, often finishing the point with an inside-out forehand or a drop shot near the net. She is also noted for her use of high balls to draw short replies that are vulnerable to attack. In addition, she commonly uses slices and drop shots near the baseline to bring opponents forward and set up lobs or passing shots. Caroline Wozniacki once termed Andreescu’s style as similar to that of her role model, Kim Clijsters.

With the win over Williams, Andreescu has risen from world No. 243 to 5 in a span of just 11 months. Also, she has now won 8 of her career meetings against players in the top 10 and is unbeaten in a completed match since March.

Going by the style of play and the maturity shown by the young Canadian on the court, one thing that can be said with all certainty is that Bianca Vanessa Andreescu is destined for greatness.