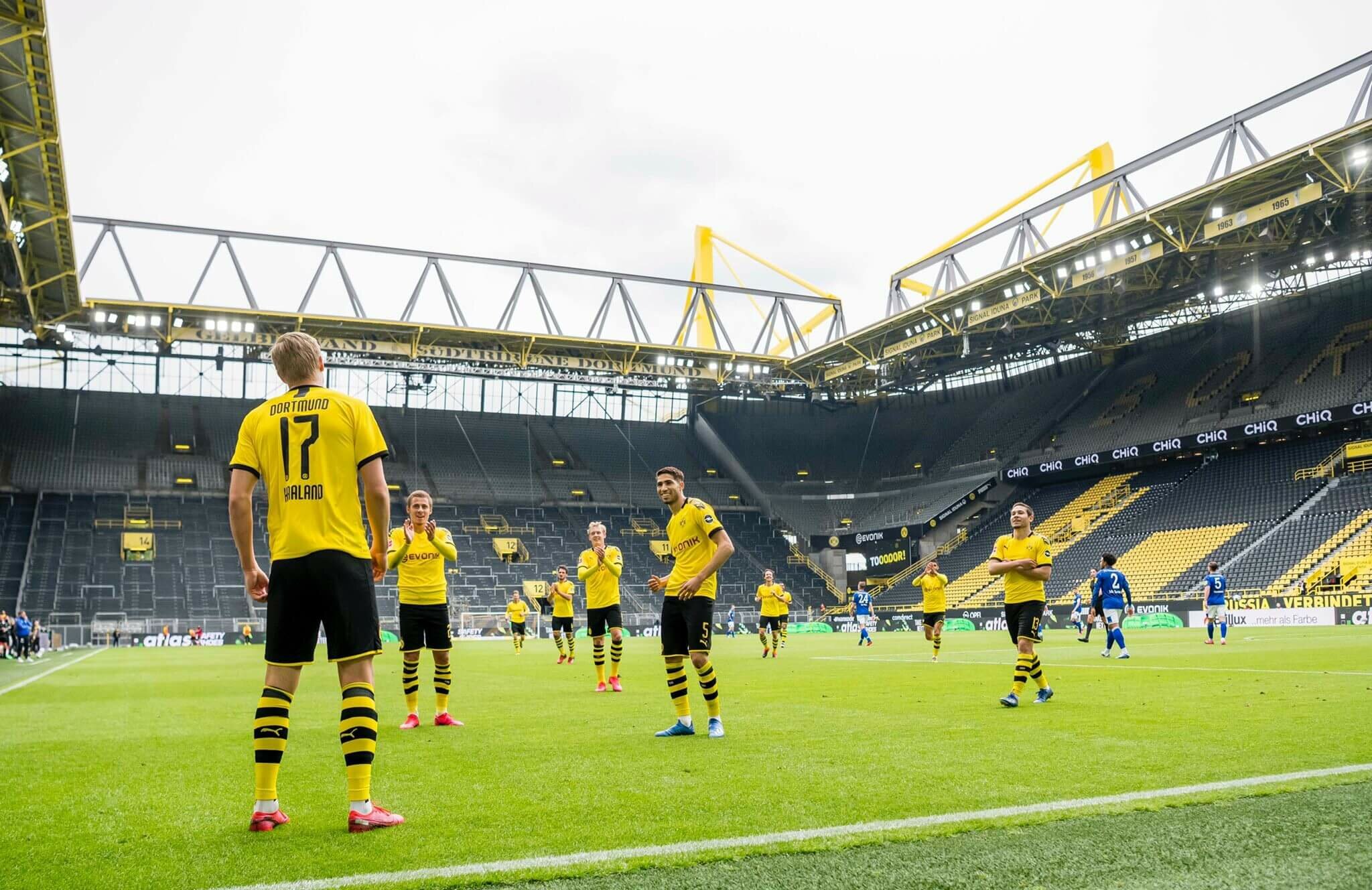 As the footballing world waited with bated breath for the Bundesliga to kick off, one thing was very clear- the in-game experience as we know it would change drastically. There weren’t 80,000 fans at the Signal Iduna Park nor were the awe-inspiring tifos decorating the Yellow Wall but amidst all the silence, football was back. After a break of 66 days, football returned to the German top-flight and the men in yellow did not disappoint at all, soundly defeating their bitter rivals in a match which was anything but the ’Eternal Derby’. Here are the five things we learned from the Revierderby.

Julian Brandt ran the game from start to finish 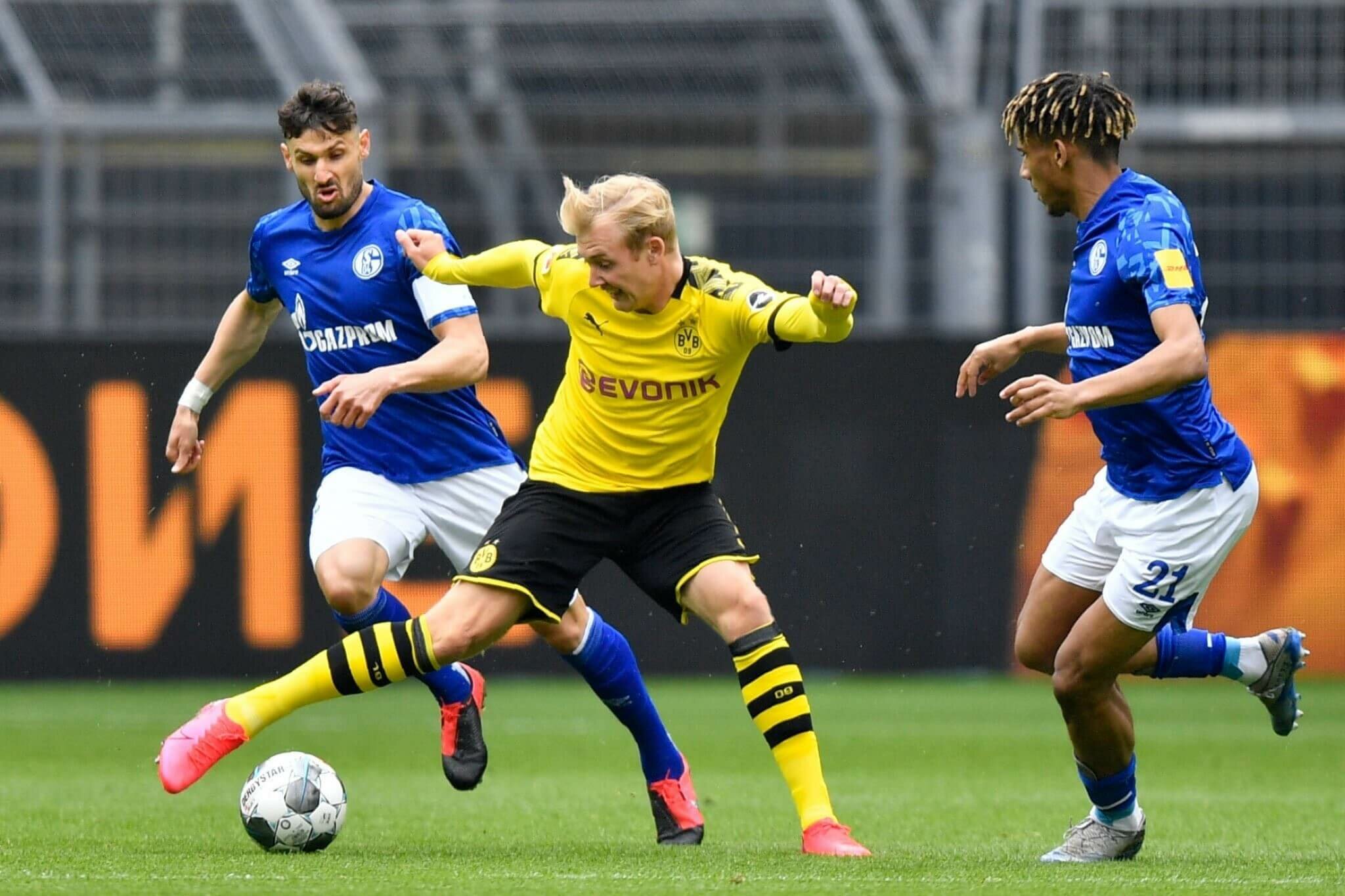 It seemed as if during the whole lockdown period, Julian Brandt played a lot of football in his garden and brought the same ease to the Westfalenstadion as he was full of tricks and flicks, playing with absolute nonchalance, comfortably drifting between positions and providing two wonderful assists for Raphaël Guerreiro and Thorgan Hazard. The former Leverkusen man looked in his element on the day and was nearly unplayable at times, tormenting the Schalke defence, time and again.

Hakimi and Guerreiro: the gold standard for wing-backs 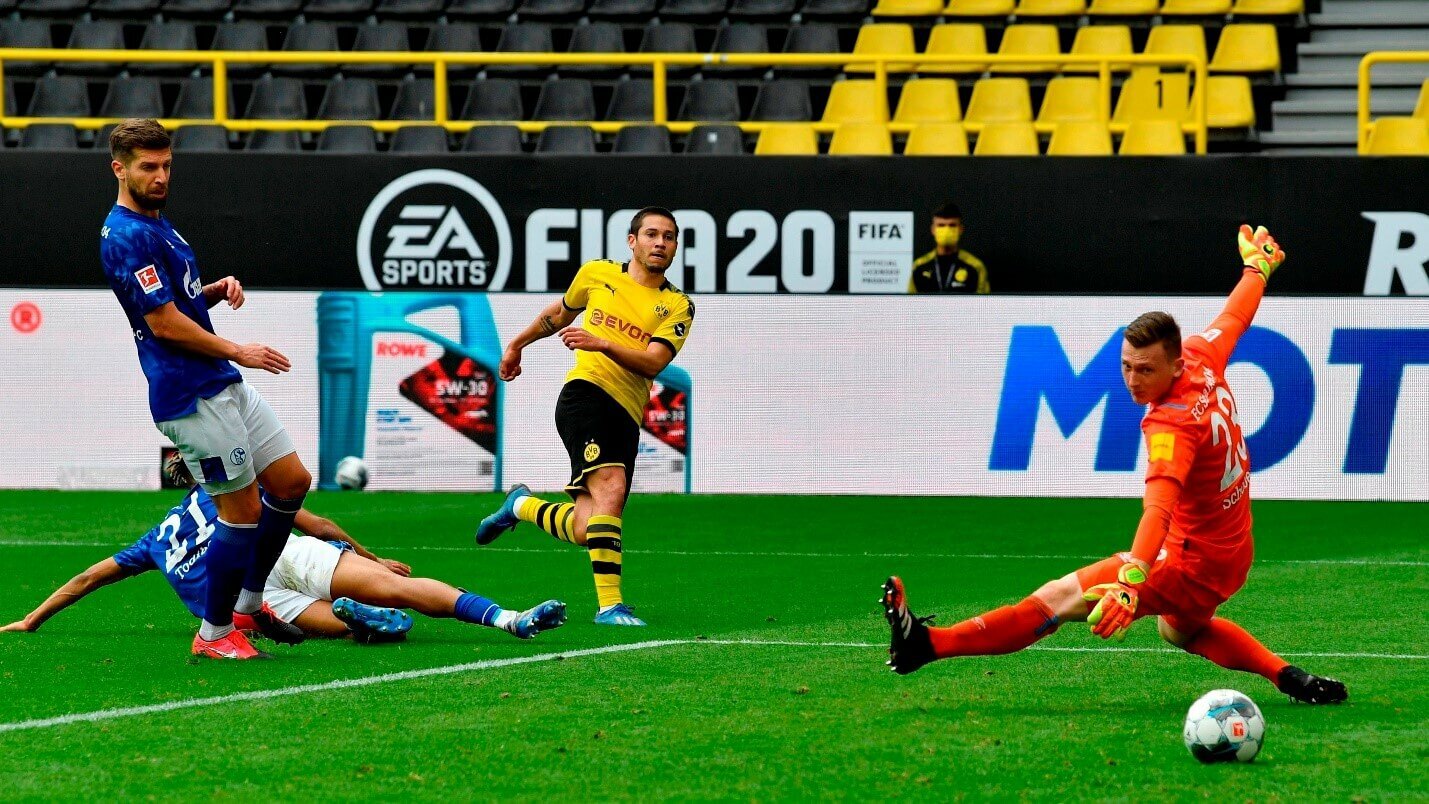 A lot of Dortmund’s attacking play is based on their full-backs and in Achraf Hakimi, they have one of the best right-backs in the game. What makes him unique is that going forward, he has got the flair of a winger and his composure on the ball is second to none as he invariably finds the right ball into the attacking players, while being defensively disciplined at the same time.

On the opposite flank, Raphaël Guerreiro showcased that he when he gets on the scoresheet, he is scorer of great goals. Brought into Dortmund as a left-back, he has seamlessly adjusted as a left wing-back who also tucks into the midfield position under the Favre system and has allowed his coach to play with a very fluid midfield.

His versatility can be reflected through the brilliant brace he dispatched on the evening. His first goal came after bombing forward past the effortless Brandt on the left, latching onto the end of a through ball by the German international and rifling it in. On the other hand, the 4th goal of the game came about due to this fluidity and some incredibly intelligent running by the Portuguese as he received the ball after a delightful one-two with Erling Braut Håland and made a difficult finish look ridiculously easy.

More than a defence, Wagner’s got an attack to sort out 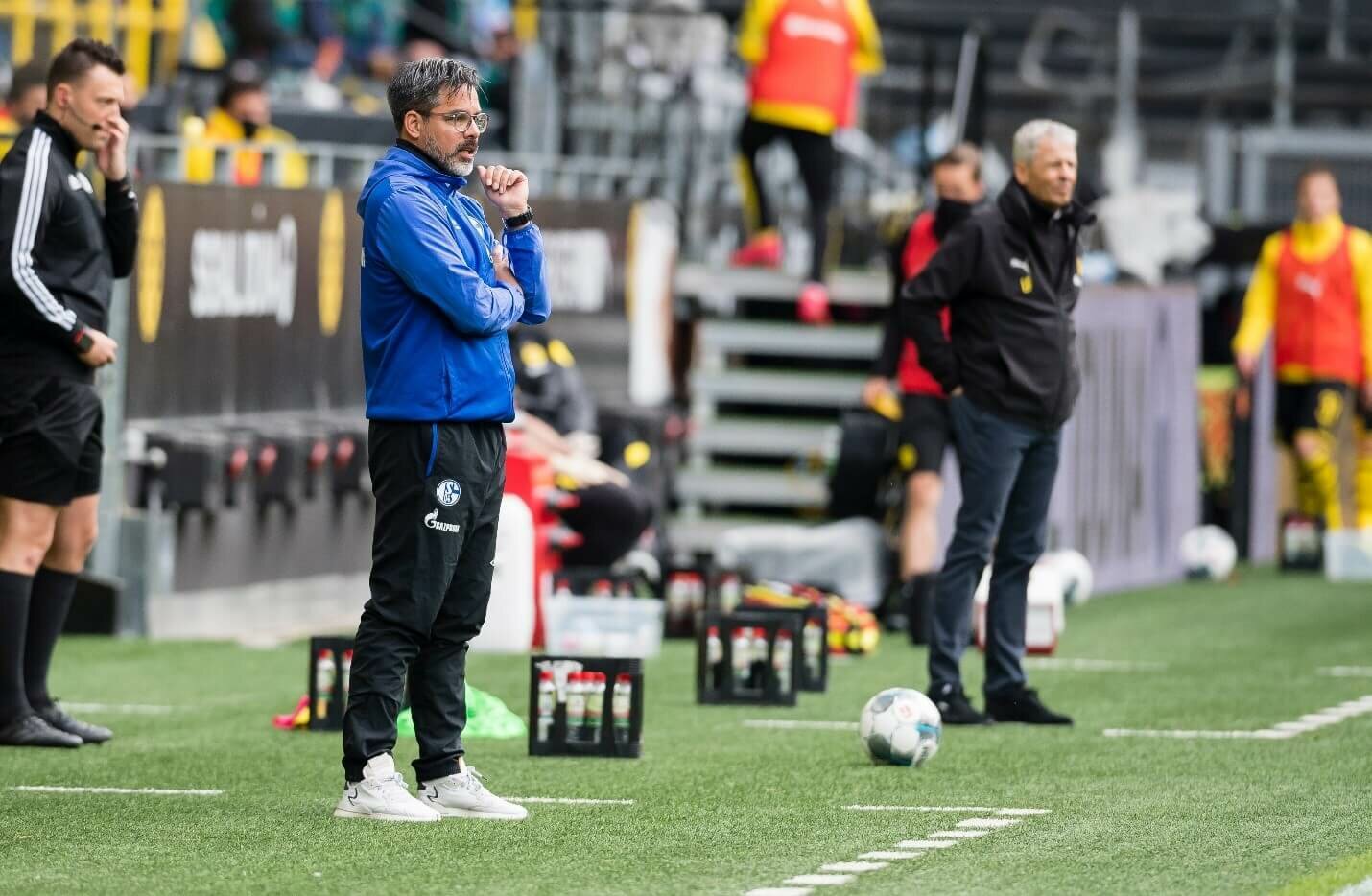 A 4-0 scoreline would ideally point to a host of defensive issues for the losing team but the problem for David Wagner’s team isn’t just limited to the defence; their attack has been abysmal since Christmas. The Gelsenkirchen side have managed to score a grand total of 4 goals in the league since the turn of the year. With such an output, even if they were to have the best defence in the division, they would struggle to get points and as we saw today, that clearly isn’t the case. Time might just be running out for Klopp’s former assistant and he needs to turn this sequence of results around as soon as possible to stay away from the sack and guide Schalke into Europe.

A lack of ideas leads to a lack of goals- it really is that simple.

Håland is all substance 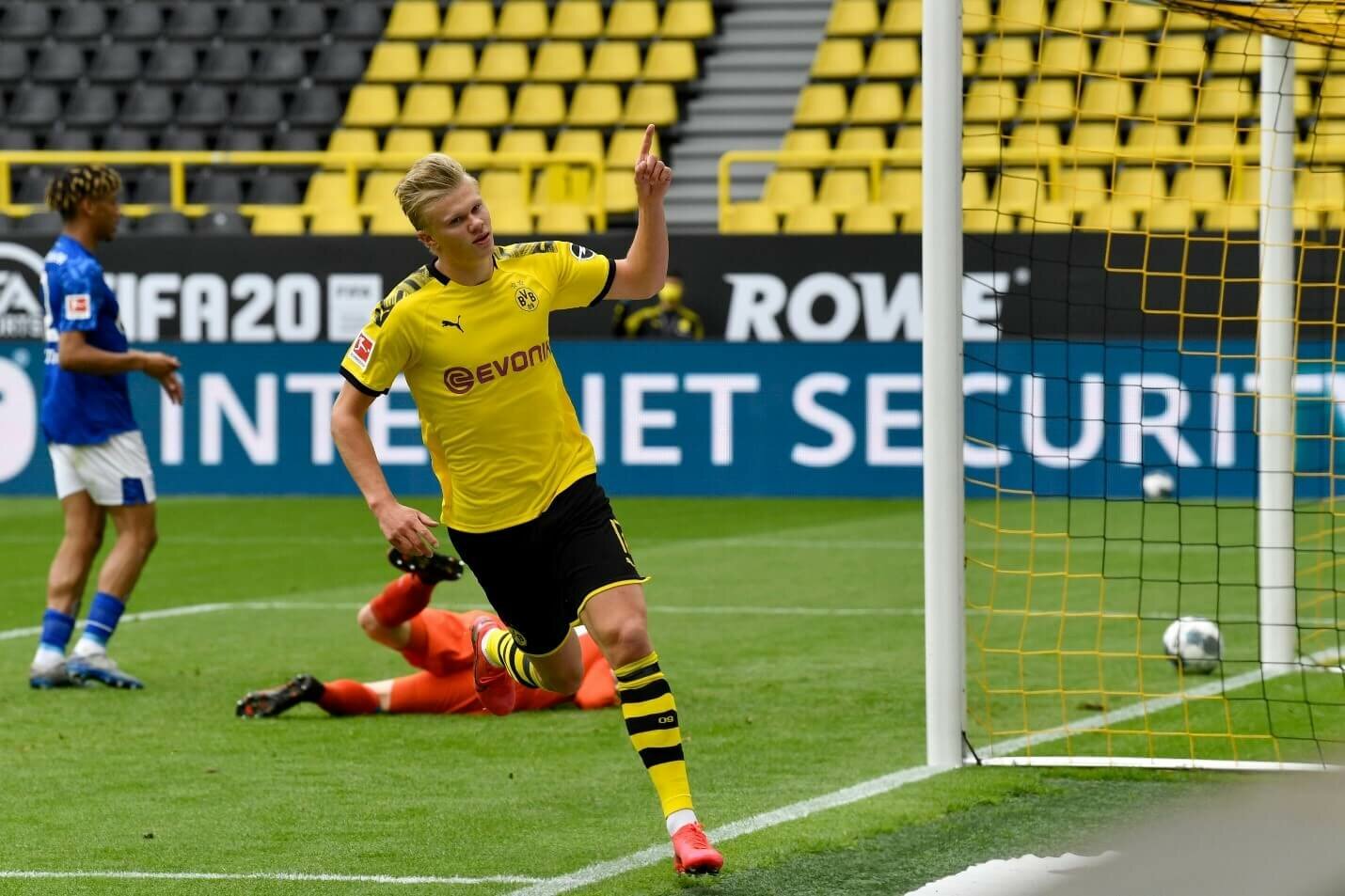 There are only a few certainties in life; the sun rising from the East, the Earth spinning on its axis and the cows going moo, but the way Erling Braut Håland has taken to the German top-flight, it seems he is intent on adding his name to that list. He once again was lethal in the game and showed that break or no break, he’s going to be the striker of the 2020s. His understanding with Hazard was impeccable for the first goal and he was a constant threat for the Schalke defense and showed his control and link-up play by setting up Guerreiro for the 4th goal of the game. The Norwegian has been an absolute bargain and looks set to terrorize the Bundesliga defences for ages.

Is football really back without the fans? 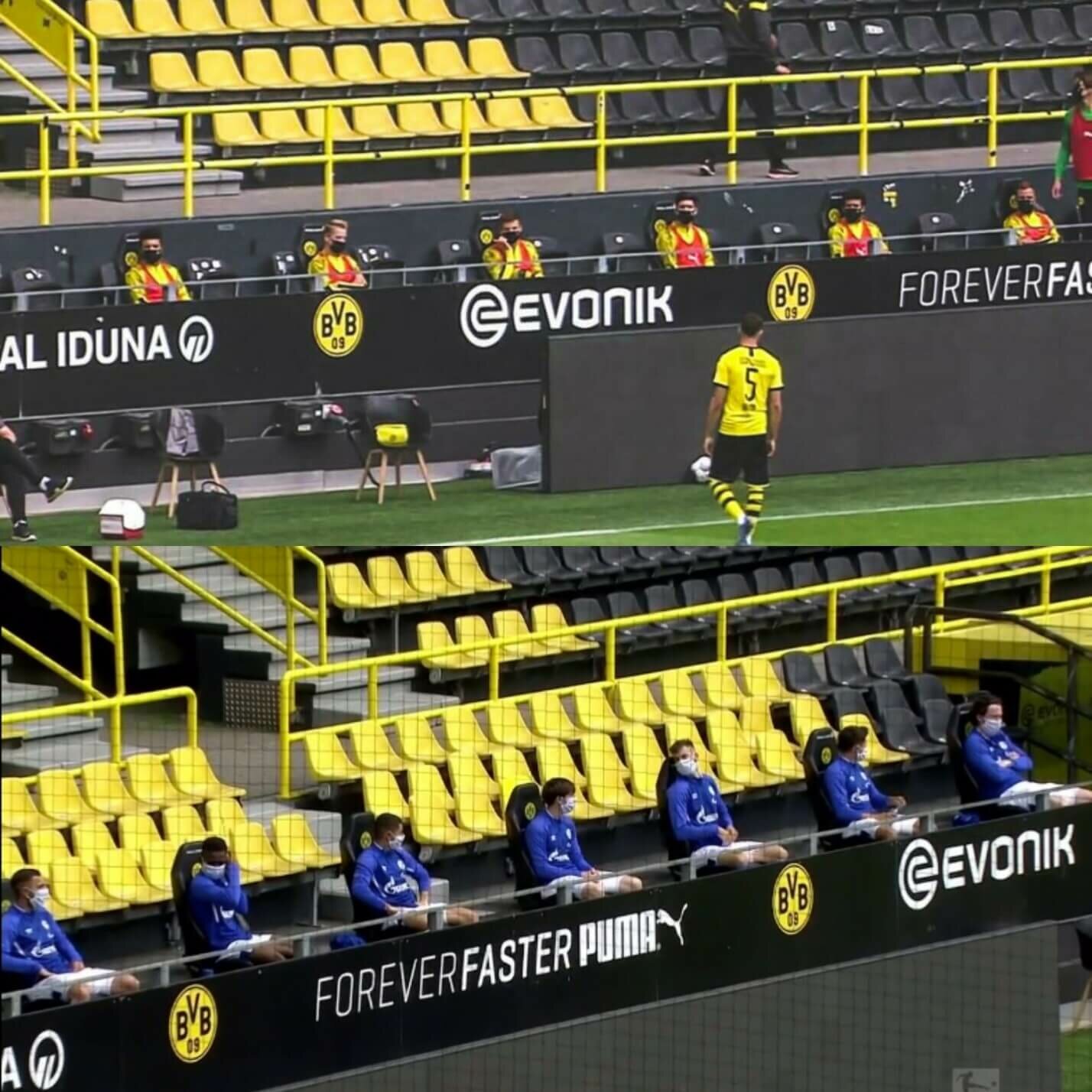 This was the first match post the lockdown where the entire world was watching and the fact that there were no fans at all for the biggest derby in German football definitely took some sheen out of it. Even though it’s refreshing to be able to hear the tactics being bellowed out from the bench, one is left feeling a bit empty looking at vacant stands. Football is as much a spectacle as it is a sport. In that regard, even though much to the relief of many fans worldwide, the game is back but the experience remains slightly amiss.

Lethargy wasn’t just there on the part of the players (due to the obvious break they have had) but also perhaps amongst the viewing public who often look towards the fans to be able to get the sense of excitement that is all too vital in any football match. 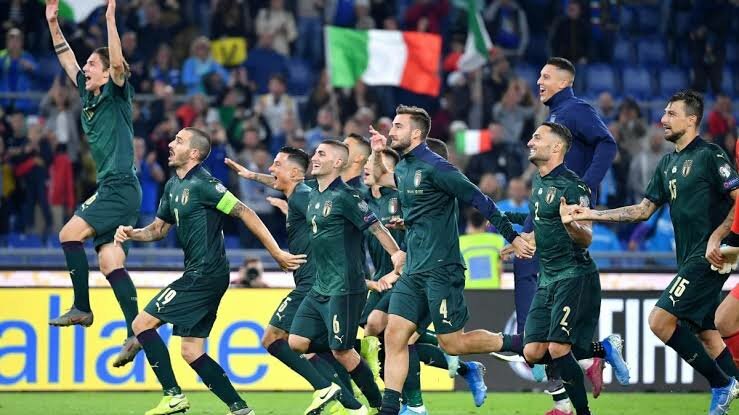