BRAZILIAN GRAND PRIX PREVIEW: 4 THINGS TO LOOK OUT FOR AT INTERLAGOS

Even with the World Drivers’ Championship wrapped up at the United States Grand Prix and the World Constructors’ Championship even before that, there are several other things to look out for at Autódromo José Carlos Pace or as it’s famously known, Interlagos. To celebrate Ayrton Senna’s 25-year legacy, São Paulo hosted a tribute festival in his honour on November 9. F1 legends including two-time World Champion Emerson Fittipaldi, a major influence on Senna’s career, and Felipe Massa, who followed in his compatriot’s footsteps, drove around Senna’s historic cars to lead the celebrations.

At 4.309 km length, Autódromo José Carlos Pace is one of the fastest circuit on the calendar. Currently Valtteri Bottas holds the lap record at 1:10.540.

Fans are expected to turn up in big numbers for the main race and continue the celebration of the life of the legend and enjoy the high-speed action that’ll follow. Lewis Hamilton and Sebastian Vettel will be looking for their 3rd and 4th wins at the circuit, respectively. Here are the 4 things you need to watch out for in the upcoming Brazilian Grand Prix.

Battle of the Best of the Rest

Renault will be hoping for a miracle to topple McLaren from the 4th place in the constructor’s championship.

After Mercedes won their sixth straight constructors’ championship in Japan, it’s all to play for between the rest of the field. Ferrari will look to re-assert their dominance over Red Bull, but fiercer battles will take place in the midfield. In a 4-way tussle between McLaren (121 points), Renault (83 points), Racing Point (65 points) and Toro Rosso (64 points), McLaren are looking comfortable to edge out the other three for the best of the rest title. Renault will be hoping for an absolute miracle and McLaren failure to bounce back and finish at 4th. Meanwhile, Racing Point and Toro Rosso will lock horns in a battle to overtake Renault and look to end the year on a high. While there won’t be moments like, “Is that Glock!?” or when Vettel came back fighting after a first lap collision to clinch the championship, the race still promises to be a thrilling affair.

After bouncing back in fine fashion in the second half of the season, the prancing horse is still looking to improve their car before the start of next season’s testing. After Mattia Binotto termed Mercedes as the ‘benchmark’, Ferrari engineers will be looking to get the maximum insights from the car in Brazil.

“It’s true that we were not gaining on the straight as much as past races but it’s true as well that I think we matched our competitors on cornering, at least at times in qualy (sic),” said Binotto after Sebastian Vettel retired early and Charles Leclerc finished 40 seconds behind the Mercs in Austin.

Ferrari still needs to work a lot on the car to put up a fight against Mercedes next year.

Talking about improvements in the car, Binotto said – “The trade-off between grip-limited and power-limited has been moved this weekend as a test on our side. As simple as that. First, we were competitive in qualifying, and now there is something in the race to understand, and we need to understand what’s best for the next races in terms of the trade-off.”

Ferrari will look to bounce back next season and put up a challenge against their German rivals, who’ll be in pursuit of their seventh successive constructor’s championship.

All eyes on Albon

After Red Bull confirmed their driver line-up for the 2020 season with Max Verstappen and Alexander Albon at the steering wheel, all eyes will be on the Anglo-Thai driver as the pressure to retain his seat is lifted off his shoulders. Albon has been in fine form since being promoted to Red Bull, successfully outscoring his more experienced teammate Max in the same car, 58-39.

Alexander Albon has had some sensational outings since joining Red Bull after replacing Pierre Gasly.

In other news, Toro Rosso (rumored to be renamed to Alpha Tauri next season) confirmed Pierre Gasly and Daniil Kvyat for the 2020 season, to the immense pleasure of both drivers. Elsewhere, as Antonio Giovinazzi signed for Alfa Romeo and with Nicholas Latifi destined to take Robert Kubica’s seat at Williams, it seems as if there’s no light at the end of the tunnel for Nico Hulkenberg.

Coming back to Red Bull, Albon will be looking forward to seizing the opportunity and challenging Verstappen to become team’s alpha driver and, who knows, maybe even compete for the championship next season.

A big part of the championship deciders of the past has been the weather, especially in 2008 and 2012. It’s not even worth checking the weather forecast at this stage because it can change seemingly out of nowhere and can deliver some thrilling races like the one in 2016 when Verstappen came second behind Hamilton, courtesy of a wet weather masterclass. It has been fairly common for the rain to hit at some stage during the race weekend. Even if it rains on Saturday, it can have a major impact on Sunday as in few areas of the track, the water starts flowing like a river. 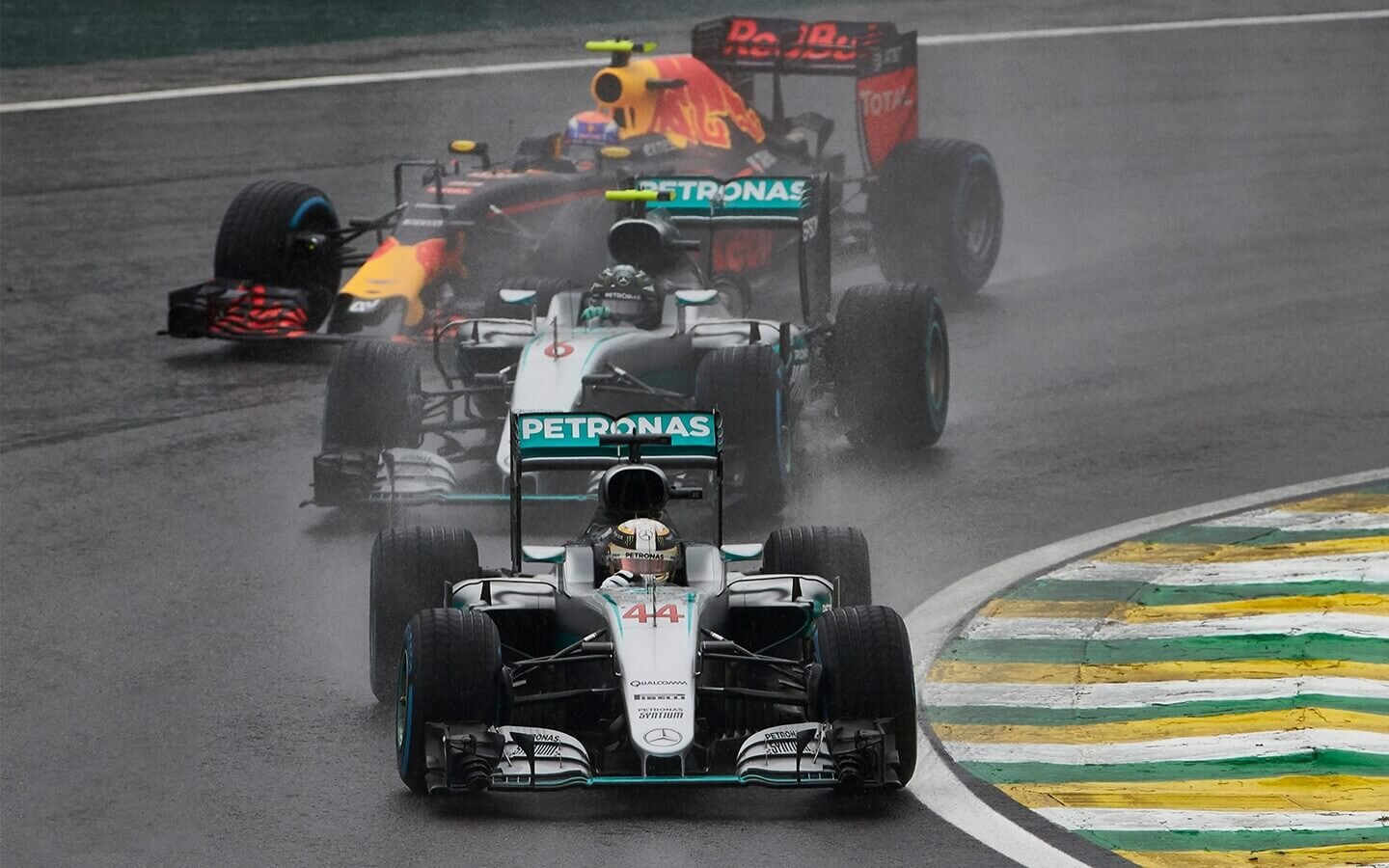 Rain can always play a big part in the turn of events at Interlagos.

Also, the weather can vary up to 30° C from practice to race, which makes it very difficult to predict how the tyres are going to perform in the qualifying as well as the main race, thus making it difficult for the teams to strategize accordingly.

Following the Mexican Grand Prix, many people are expecting Lewis Hamilton and Mercedes to dominate at both Interlagos and Yas Marina. Will Ferrari and Red Bull be able to put up a valiant challenge against the Silver Arrows? How will the midfield battle fare out? Interlagos awaits with all the answers.