Everyone’s eyes were on the Sheikh Zayed Stadium in Abu Dhabi for a fearsome battle between the two sides from the southern states. With both teams looking to reach the final, the encounter was bound to be a mouthwatering contest and it’s safe to say that the match did deliver. Even after a tame first innings total, the Royal Challengers Bangalore bowlers tried to pull out the rabbit from the hat and took the game into the final over, but it was the Sunrisers from Hyderabad who came out on top and cemented their place in the second qualifier against the Delhi Capitals.

From Hyderabad’s bowling masterclass to a dismal show by Virat Kohli, here are the hits and misses from the game as Hyderabad defeated Bangalore by 6 wickets from what was a game worth the headlines.

The Sunrisers bowling unit is lethal

Sandeep Sharma, T. Natarajan and Rashid Khan have been brilliant for the Sunrisers throughout this tournament. But the additions of Shahbaz Nadeem and Jason Holder have added a new vigor to the bowling attack that was already very fearsome. When Bhuvneshwar Kumar and Mitchell Marsh got injured, Sunrisers would have had all the worst thoughts they could imagine about how they will manage to muster up a bowling line-up strong enough to compete for the rest of the tournament. But the inclusion of Holder has flipped the switch completely.

The Windies red ball skipper has varied his pace brilliantly and changed his lengths to perfection since he has been included in the side and he showed his worth in this crunch game as well. In the middle overs, both Nadeem and Rashid were able to put a full stop on the flow of runs which mightily helped the Orange Army and put Bangalore into a land of trouble. If this bowling unit continues to perform like this, Hyderabad are serious contenders for the title.

Williamson and Holder held their nerve

Chasing 132, no one would have thought that the game will go into the dying embers. At one point, it even looked like the game might slip away from the Hyderabad’s grasp but Williamson and Holder made sure that none of that happened. When the Sunrisers were 67-4 in 12 overs, it looked Bangalore might pull off the miracle of miracles. But two of their nation’s head honchos steered the innings and managed to stabilize it before attacking the odd balls and playing some sumptuous shots in the process.

Holder played his natural game, attacked the bowlers and helped Williamson in taking the team home. Being brilliant with both bat and ball, the lanky all-rounder came up trumps.

Watching Chahal and Zampa bowl was a dream

Bangalore might have lost the game but nothing can be taken away from the wrist spin duo of Yuzvendra Chahal and Adam Zampa. After all, their wizardry is what was vital in pushing the Hyderabad batsmen to the edge. Chahal, who has been brilliant with the ball throughout the tournament did not let the SRH batters to score runs freely and put a stop to their planned assault.

One-half of India’s finest spin twins finished the game with a wicket and an enviable economy of 6 from 4 overs. But it was his partner who was even better. Adam Zampa finished his quota of 4 overs and just conceded 12 runs, taking the wicket of Manish Pandey in the process.

Zampa and Chahal blocked the flow of runs in the middle overs and were the standout performers in the second innings for the Royal Challengers Bangalore. 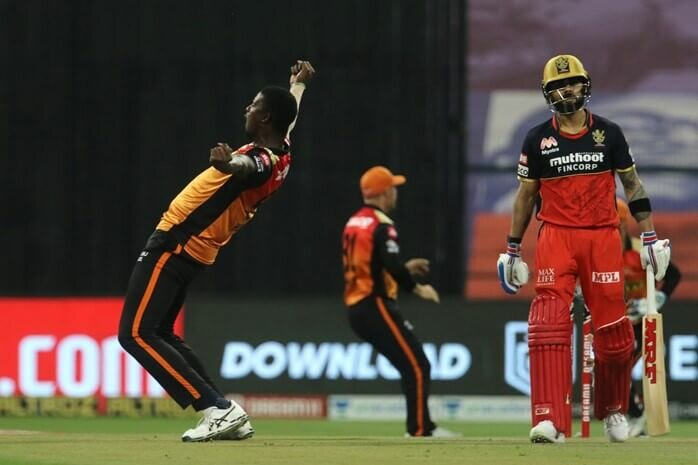 Virat Kohli is one of the greatest in the game. There’s no denying that. And Bangalore did have the right idea when they decided to send him at the top of the order. Kohli playing as many balls would have worked tremendously in favor of the team-a move which was risky but would have paid dividends if it worked. Unfortunately for Bangalore, it did not.

Sandeep Sharma is one of the few selected bowlers who have been a thorn in Kohli’s side for a long time now in the IPL. But it was Holder this time around who sent the Royal Challengers’ skipper packing. Once Kohli got out, naturally, it put immense pressure on the rest of the batsmen. Kohli is someone who scores runs almost every time and does the business till the end.

Losing him that early was the most disastrous start Bangalore could have imagined. It put a lot of pressure on Padikkal as well and he succumbed to it in the powerplay itself, much like the other batsmen that followed.

AB de Villiers was brilliant. It’s what he does on a regular basis- performs brilliantly and keeps his team in the game. But the others were not there to support him and steady the innings. Continuing from where we left off in the last point, losing both the openers early, it was Aaron Finch and de Villiers’ job to steady the ship and score the big runs. But Finch’s poor tournament ended on a note that summed things up for the Aussie opener as he was not able to fight his way through his jittery start at the crease And after that, Moeen Ali’s run out on the free hit was yet another disaster.

From there, Bangalore entered self-destruct mode. ABD tried to hold one end firmly but both Shivam Dube and Washington Sundar disappointed when the team needed them the most. And when de Villiers was cleaned up by a snorter from Natarajan, it was evident that the team would not even reach 140. The Bangalore batting line-up failed where it mattered the most and that’s all that needs to be said.

David Warner is the season’s second highest run scorer at this point of the tournament. But his patchy form as of late will be a concern for the team in the upcoming qualifier. Some might argue that the umpire’s decision was a bit harsh when he gave Warner out but it is what it is in the end. And similarly, it wasn’t Manish Pandey’s greatest outing as well.

At points, he looks like the player with the golden touch, timing the ball exquisitely and hitting every bowler around the park. But at another point, he’ll look clueless and throw his wicket away. Blaming Shreevats Goswami for the top-order collapse would not be fair on the wicketkeeper batsman as he was only playing his first match of the tournament.

All that can be mentioned to sum things up is that heavy hitters such as the likes of Manish Pandey and David Warner need to be at their best if the Sunrisers want to reach the final or even go one better.