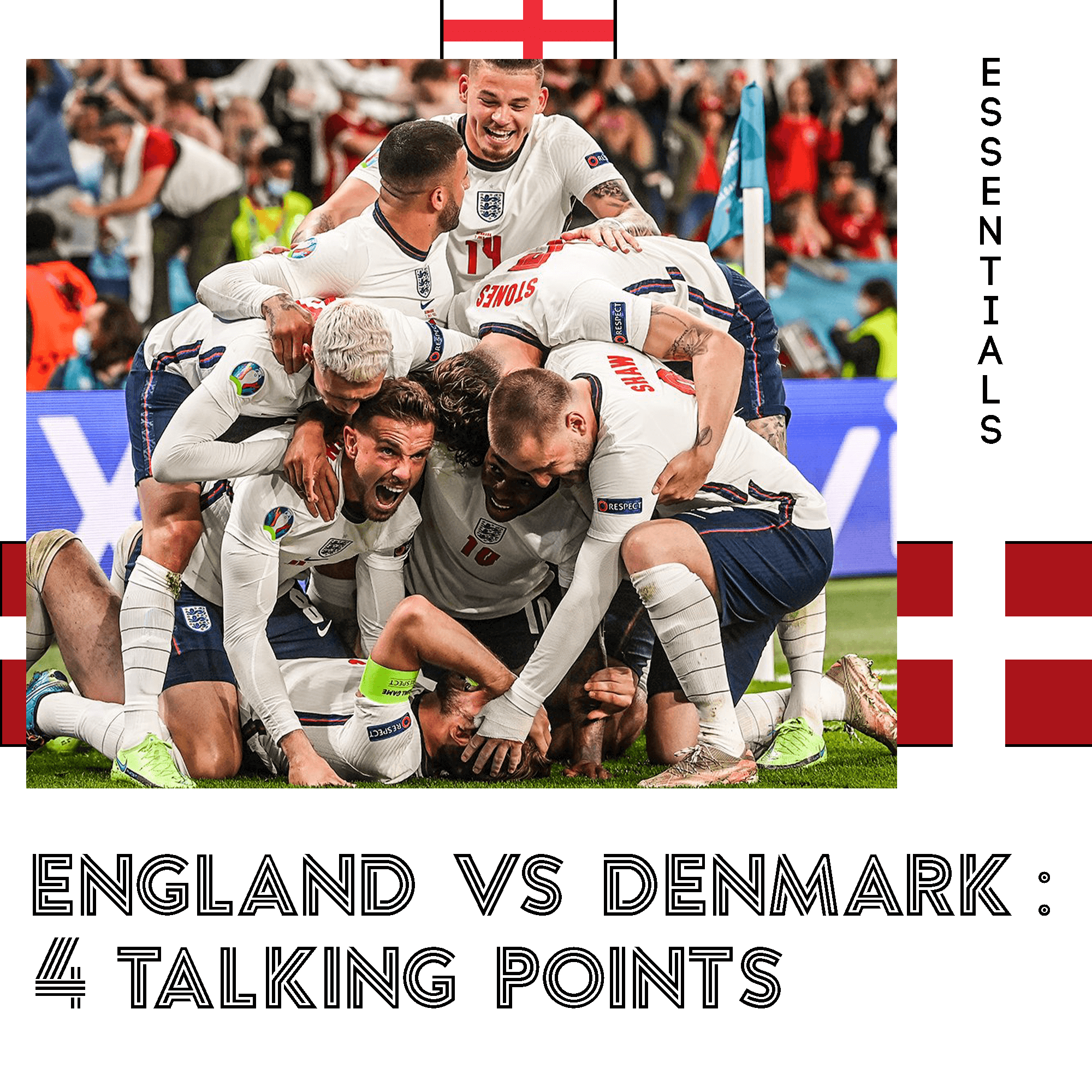 It may just be coming home as England scraped past Denmark, after a dodgy Harry Kane penalty sent the Three Lions to a final at Wembley against Italy.

Raheem on the right is never wrong

It took a phone call with Pep Guardiola mid-Euro 2016 and shifting from the left to the right-wing for the rise of Raheem Sterling to kick into gear. And to be fair to Gareth Southgate, the boy from Brent has torn Euro 2020 apart off the left.

But if you revisit his 2020-21 campaign, it reeks of predictability because any inverted left-winger in the world is resigned to cutting inside to make things happen and gift their right-back a field day if they’re not two-footed. Reece James can vouch for that.

But when Raz is stationed on the right, you can never get it wrong because he can be as unpredictable as any winger in the game. Joakim Maehle can vouch for that.

After Sterling was more miss than hit as a left-winger during the course of the 90 minutes, Jack Grealish’s introduction meant Raheem switched to the right in extra-time to ensure Maehle was in the midst of a nightmare at Wembley.

It was carnage as Sterling obliterated the Atalanta wing-back, cutting inside and driving down the flank while also going outside and leaving his full-back with a migraine. One man wasn’t running out of ideas and the other was running out of breath.

And one of Sterling’s 10 staggering take-ons (yes, you read that right) added to Maehle’s misery as the referee gifted England a penalty as the Three Lions’ No. 10 fell to the floor way too easily.

Raheem Sterling’s game by numbers for #ENG vs. #DEN

Well on the bright side, the Danish defender could take a breather for a second as Mission Choosing Violence, courtesy of Mr. Sterling could as well.

Raheem on the left is phenomenal. Raheem on the right is unplayable. Gareth, if you’re reading this, it’s not too late.

A word on that Danish defensive masterclass

Dark horses going into the tournament, the great Danes fought till the end and surprised the world. Denmark deserve our praise for reaching this far and producing a colossal defensive display on the night, despite eventually falling to the sword. While Harry Maguire was the Three Lions’ biggest threat aerially, the mercurial English was made to look toothless by that Danish back 5.

Especially the likes of Christensen, Kjaer and Vestegaard put their heads, bodies and lives on the line to put in a defensive masterclass at the back.

Pierre-Emile Hojberg’s reading of the game isn’t talked about enough but holding an attacking England for over an hour while breaking the lines, Spurs’ No.6 was absolutely immense on the night. And his sensational display could have sent the Danes to a penalty shootout with the English, which would have been their best-case scenario after 120 minutes of defending deep with big Kasper making them favorites.

10 England shots on target can only be blocked with the kevlar that embodies Kasper Schmeichel, who produced some world-class saves to keep the Danes in the game, but one stray bullet after going the right way isn’t the way we should define his heroics.

FA cup-winning flashbacks must’ve made for déjà vu your as it rightly should have and the Leicester ‘keeper produced another stellar performance in a packed Wembley stadium.

It wasn’t their day but the Danish defensive masterclass deserves everyone’s respect.

When it mattered the most, VAR went missing

With a total of 20 shots and a staggering 16 inside the box, you’d expect the Three Lions to eventually score from open play but a controversially awarded penalty only reminds you of the toxic relationship VAR has with English football.

Sure, Raheem Sterling was brilliant all night with his pacey dribbling on both flanks and his influence in the first goal, but to go down the way he did was probably as intelligent as how Arjen Robben or Neymar have in recent years. It’s a bold statement, but the camera angles suggest that the Man City man was on his way down with possibly the slightest of contact from Mæhle.

To be fair, Sterling was bound to get clobbered in between the Danish defenders but in this scenario, inertia from a near-impossible breakaway was surely what dropped him to the turf.

There’s no doubt that the Atalanta defender was going in for the challenge, but even by avoiding a clash of knees, it may have convinced the referees that a brush against Sterling’s leg was enough to point to the spot.

VAR is in place to inspect and by awarding it too quickly only raises suspicions as to whether it is truly promoting fair play. We all know how the game ended but it’s only right to take a better look when everything’s on the line in extra-time.

This England side is littered with superstars and while trying to put forth a balanced argument, the refereeing let us down for once when the stakes were the highest in a tournament where the officiating has been superb.

How can replacing your 2 best attackers ever be a good idea?

It’s 1-1, you’re playing the biggest game of your lives in nearly 3 decades and you bring off Mikkel Damsgaard and Kasper Dolberg off in the 67th minute. And that’s after Damsgaard’s gorgeous free-kick forced Wembley to take a vow of silence (barring the Danish faithful) and Dolberg didn’t need a goal to his name to show for an excellent outing.

Unlike England’s front 3, Braithwaite, Damsgaard and Dolberg were in sync in transition and looked far better going forward, despite the Three Lions having a lion’s share of the ball.

The signs were ominous and with 23 minutes left on the clock, Danish head huncho, Kasper Hjulmand decided to bring on industrious midfielder Christian Nørgaard for Dolberg as well as the seasoned Yussuf Poulsen for Denmark’s sole creative force in Damsgaard.

Now in the group stages, an approach as safety first as this makes complete sense, considering you take the point and move.

But considering the possibility of the Three Lions taking the lead and having to answer for it is basic foresight. And predictably, England went 2-1 up as Harry Kane put the ball into the back of the net.

Crushingly, the Danes couldn’t even dream of a response because their triumvirate up top were second string in possibility the biggest game of their lives.

What was commendable about Denmark during the first 3 quarters of the semi-final was not just their immaculate defending but their composure and willingness to break forward.

After the Danish tactician sent Dolberg and Damsgaard for an early shower, it was defend, defend, defend without any proper gameplan and it cost them.