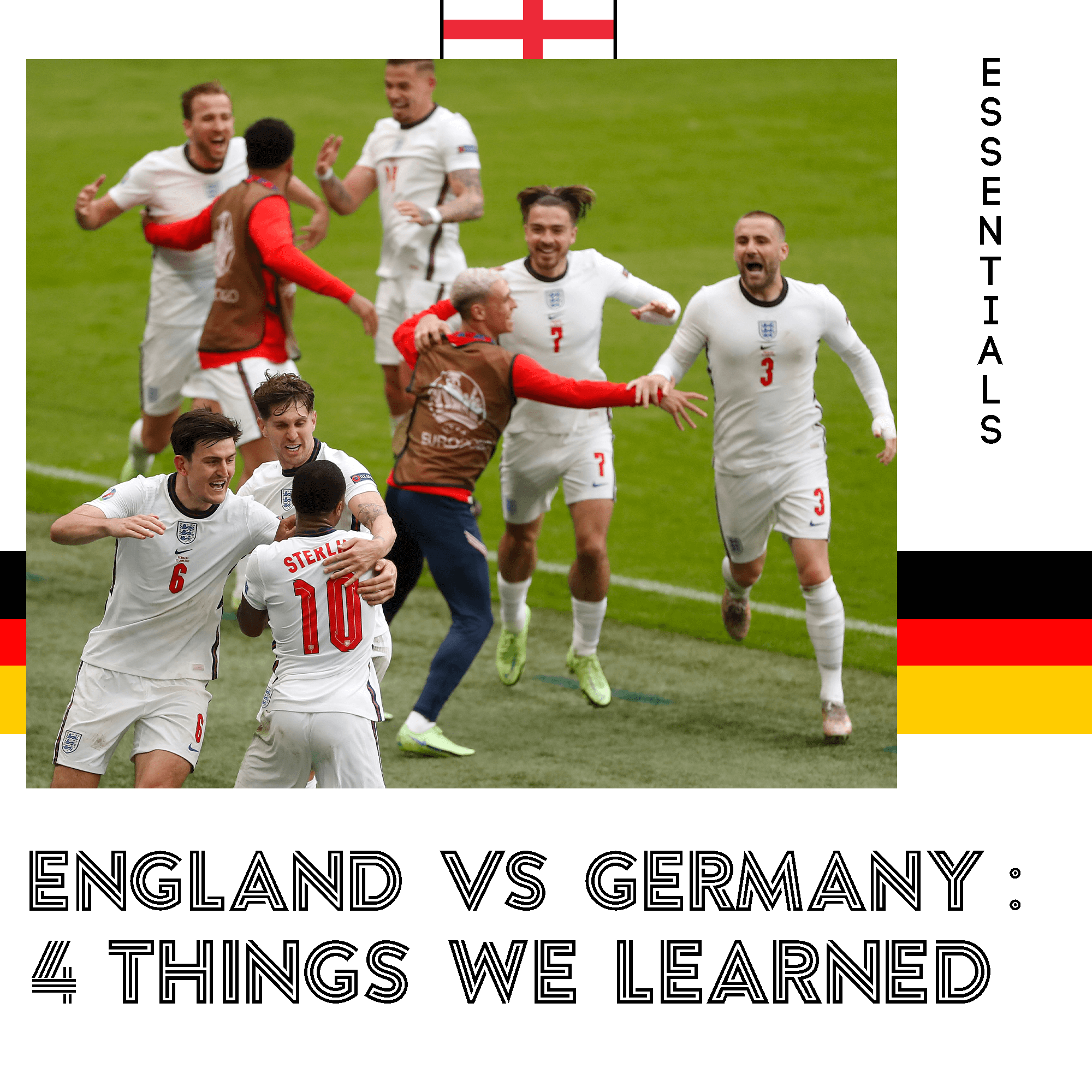 Wembley witnessed a Three Lions masterclass as Germany fell to the sword, courtesy of goals from Raheem Sterling and Harry Kane.

With so much to unpack, let’s jump right into it with our 4 talking points from England vs Germany.

As everyone did their best Gareth Southgate impressions before even a ball was kicked at the Euros, Raheem Sterling’s inclusion was an unpopular one in and amongst the unmissable array of line-ups. 3 goals and 4 games later, not a soul would tell you that he hasn’t been England’s standout player at Euro 2020.

3 – Raheem Sterling is only the second player to score each of England's first three goals of an edition of a major tournament (World Cup/EUROs), after @GaryLineker did so at the 1986 World Cup. Magic. pic.twitter.com/SDfOiN3GSR

And despite clear instructions drilled into the Three Lions to sit back and soak the German pressure, Sterling wasn’t throwing his arms in the air for the lack of service and attacking endeavor. Instead, he willfully took the onus and constantly drove at the German midfield and backline, roaming into central areas and forcing the opposition into fouls.

When you’re pacy enough to become an Olympic athlete and you’ve got feet so quick defenders only see a blur before you leave them for dead, you’re as close to unstoppable and that’s defining Raheem Sterling in a nutshell and certainly against the Germans.

But it was in the 75th minute when Raz proved once again why Wembley really is his back garden. Holding his run like any seasoned goalscorer as he was perfectly positioned between the German centre-halves, Sterling latched onto an inch-perfect Luke Shaw cross and made a nation dream once again.

But in case you missed it, Sterling started and finished the move.

At Euro 2016, there were England fans signing a petition to send this lad home mid-tournament. 5 years later, the same lad’s a national treasure.

Joshua Kimmich and Robin Gosens were Portugal’s kryptonite to an unfathomable degree. And they were in sync to the point where you’d question why the pair weren’t at their brutal best against the French? The English had reasons to be wary.

On the other hand, you really didn’t have to be Gareth Southgate to realize that Germany’s wing-backs are quite easily their biggest threat.

Southgate did his due diligence, with Trippier and Shaw stationed just to deal with Kimmich’s incredible switches of play and Gosens’ first-time fizzed deliveries. And unsurprisingly, the German wing-backs had no answers.

Worryingly enough for Jogi Löw, their biggest threat was their only threat and it was snuffed out as his side were blatantly out of ideas going forward. Barring a couple of through balls and a gilt-edged Thomas Müller miss (gifted to him after a Sterling back pass), this was a limp display going forward.

Predictable and a serious lack of cutting edge, imagine saying that about Germany.

Yes, the football has been sleep-inducing at times. Yes, the selections have been downright bizarre during others. But against Germany, with the nation’s hopes pinned on England finally doing the business after a nightmarish 18 months, Gareth Southgate got it spot on and how.

Amidst so much of the narrative being built around how being “brave” was key and the “Wembley factor”, playing the likes of Jack Grealish, Jadon Sancho, Marcus Rashford and basically every unreal attacker the Three Lions have in the bank, Southgate embraced a 3-4-3. It’s all well and good being expansive but ultimately, conservative football wins you major tournaments.

Ask Fernando Santos and Didier Deschamps. And especially when Kimmich and Gosens have mayhem on their minds.

Kieran Trippier and Luke Shaw’s inclusions ahead of an extra attacker were on the money as Germany’s feared wing-backs looked as harmless as devastating as they were against Portugal. Harry Maguire’s Man of The Match display is testament to the fact that the English were unplayable defensively while Kyle Walker and John Stones were excellent once again.

Playing a 5-3-2-1 deep block, Die Mannschaft had no spaces to run into for the rapid Timo Werner as well as the space invaders collective in Thomas Müller and Kai Havertz. Hoofing in aimless crosses was Germany’s MO while England were comfortable in being patient and going for the kill after playing the waiting game, courtesy of Jack Grealish which was an obvious, yet perfectly timed substitution from Southgate.

All in all, Wembley witnessed a conservative, calculated and clinical England and that’s all down to Southgate’s masterplan.

Germany will be happy to see the back of Löw

“Everybody in Germany will thank him for all he has done but there’s also a sigh of relief that something new starts.”

Veteran journalist, Uli Köhler summed up what every German fan was feeling in a sentence.

Tactically, Löw well and truly has run his course as you’ll struggle to find a Die Mannschaft side so devoid of ideas. While Germany punched above their weight in finishing 2nd in the Group of Death, their performances against Hungary and especially England when it was crunch time tell you the masterclass against Portugal was a bit of a one-off.

As highlighted before, Löw’s masterplan should have been much more than “it’s Kimmich and Gosens or bust” as the Germans looked underprepared and lacked a true identity after stumbling onto a secret recipe for potential success.

And you can tell a manager is losing his grip on things when the blame game starts, as it did after the German gaffer singled out Thomas Müller and Timo Werner for missing chances.

Hansi Flick awaits his succession and so does every German as they thank Joachim Löw for 15 years at the helm and of course, all the memories.

But it’s better to say goodbye sometimes, especially if it’s 7 years too late.