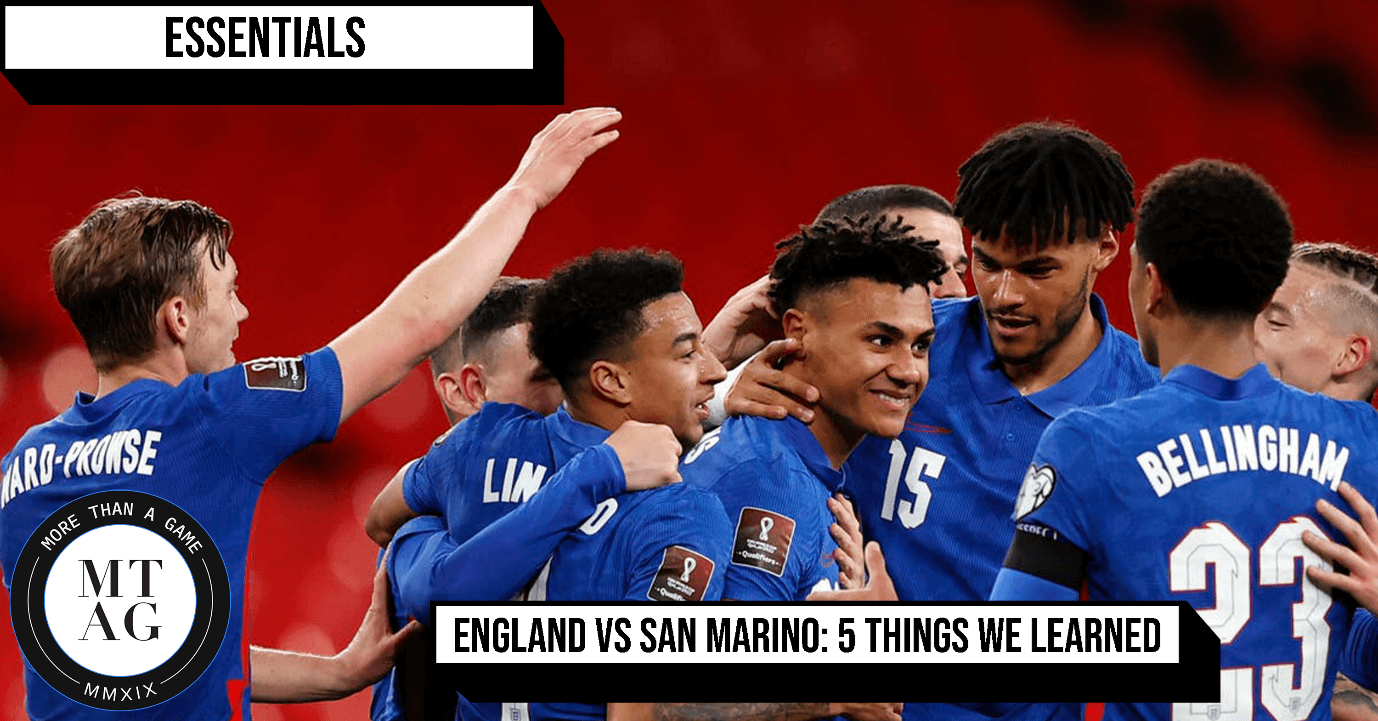 As Ollie Watkins’ debut goal was the story of the night, England yawned their way to a 5-0 victory against minnow San Marino to win their first game of the 2022 World Cup qualifiers. In what was an experimental XI that lacked the inclusions of the likes of Harry Kane, Declan Rice, Luke Shaw and Marcus Rashford to name a few, the Three Lions were dominant from the first whistle and made the game rightly look like a contest between 4th and 210th.

Goals from James Ward-Prowse, Raheem Sterling, Ollie Watkins and a Dominic Calvert-Lewin brace sealed the victory for England. Here are the 5 things we learned from what was a mismatch of a clash.

Another day, another Mount masterclass

Just in, Mason Mount is extremely good at kicking a ball about for a living. You have to be louder for the ones at the back and also keep things this rudimentary because the doubters still exist. But once again, Chelsea’s outright best player was finesse and industry galore, proving once again why he may well be the most well-rounded out of all of his counterparts.

From his slick touches on the half-turn, brilliant close control and incisive passing to fighting for every blade of grass to win the ball back, this was Mount in his element. And speaking of having an eye for a pass, the 22-year old threaded through an exquisite through ball for Ben Chilwell to set up James Ward-Prowse’s equalizer.

If you don’t buy the hype, here’s a stat for you- Mason Mount created 8 chances from open play in the first half. The last player to create more was Xavi against Bosnia and Herzegovina in 2008 (9). And he grabbed an assist.

Going into this game, Reece James and Ben Chilwell must’ve been a bundle of nerves. Hints- England and right-backs and Luke Shaw.

But instead of folding under the pressure, Chelsea’s full-back pair meant business. If DCL squandering James’ sublime cross looked like a big chance missed, the former Wigan man’s whipped in delivery was too good for the lanky No. 9 not to head home. Stepping into midfield when Lingard occupied that role out on the right flank, it was Cancelo-esque if you will and creating 3 chances in the first half, even his Portuguese peer would respect those numbers.

Chilwell on the other hand embodied the Michael Jordan meme from ‘The Last Dance’ and took things personally after Shaw’s been anointed as the king of left-backs in England. Chilly relentlessly bulldozed down that left-hand side, constantly driving with the ball, playing one-two’s with the likes of Mount and Sterling and created 4 chances in that first 45.

From putting it on a plate for Ward-Prowse’s opener, his cheeky dummy inside the box and owning the left flank like it had his name on it, Ben Chilwell was unstoppable.

These two were different gravy.

There’s no running away from this cliché as well as the fact that Raheem Sterling hasn’t had his best season. When the tin says you’re one of the best wingers in the world and it isn’t false advertising, one has to concede that the City forward hasn’t been at the races this campaign.

But amidst England’s embarrassment of riches out wide, with the likes of Jack Grealish, Marcus Rashford and Jadon Sancho, Sterling showed once again why he is virtually undroppable.

If it isn’t taking it in his stride to ragdoll defenders for fun like he did with San Marino right-back Battistini, the way he made runs in behind, took up central areas when Chilwell bombed forward and linked the attack as a No. 10 at times was indicative of his game intelligence. And truth be told, there isn’t a bigger goal threat out wide than the England skipper (for the night), bar none.

As he left a defender for dead to bag England’s 3rd of the night, Sterling registered his 12th goal in his last 14 games for the Three Lions.

Dominic Calvert-Lewin: A Plan B and a Plan A

After seasons of not scoring enough goals and also operating as a wing-back for one entire campaign, Dominic Calvert-Lewin has found himself under Carlo Ancelotti. Scoring 14 league goals in 25 matches, the lanky striker is one of England’s finest strikers, as proven by the fact that after Harry Kane, he is the Three Lions’ go-to-man up top. And while the England skipper is irreplaceable, having DCL as a plan is testament to how stacked their attack is.

Against San Marino, the Sheffield-born lad’s brace summed up what he can offer in front of goal. Bullying his marker and getting ahead of him to head the ball past the ‘keeper has been DCL’s trademark goal this season. And the 2nd goal, a tap-in from close range has become a theme in his strikes this season and is an example of how Ancelotti has taken his positional sense to another level.

To have such a complete No. 9 on the bench is a blessing and if you need a goal, Calvert-Lewin can do it all and get you back in the game. And if Southgate ever wants to start him in the Euros, it is inevitable that he is going to cause havoc.

Jesse Lingard is back

Seeing Jesse Lingard deployed on the right-wing was a strange sight at first, considering the West Ham attacker has been given a new lease of life in an attacking midfield role and seeing how natural wingers such as Sancho and Rashford were on the bench instead. Did it matter? Not at all because JLingz is well and truly back.

What stood out was how incredibly direct he was, constantly testing the ‘keeper with dangerous shots from distance and his pinpoint crossing into the box. On the night, Lingard had taken 5 shots on target and if Elia Benedetteni wasn’t having such a fine outing in between the sticks, the Englishman would be taking a match ball home just like Tomas Soucek did a night before.

Grabbing a deserved assist for Dominic Calvert-Lewin’s 2nd goal, Lingard stepped in and stepped up for Gareth Southgate.