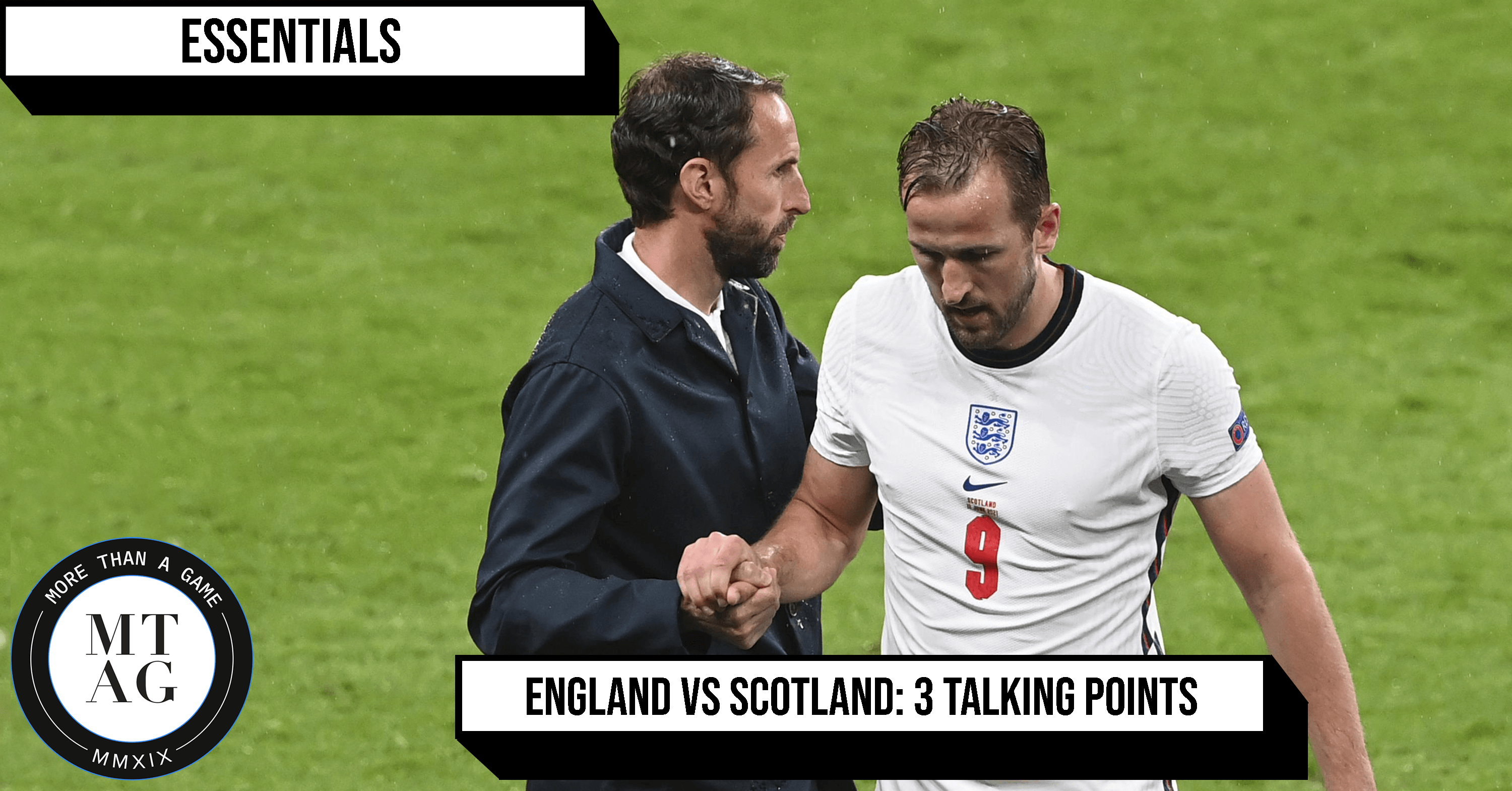 After what was a drab scoreless draw for England, Scotland rejoiced after a defensive masterclass that embodied the nation’s braveheart spirit.

In a contest that didn’t produce much to talk about and yet, left us with a barrage of talking points, here’s MTAG: More Than A Game bringing you 3.

Unlike Scotland, England have an identity crisis

You don’t need to tell Steve Clarke that his Neymar and Kylian Mbappe are Andy Robertson and Kieran Tierney. Or that organization and hard graft can you take a lot of places, considering Scotland are not one of the big dogs.

Despite sprinklings of class in their roster, the Tartan Army is built off getting the basics ticked off because they don’t need any further reminding that they can never be ’02 Brazil.

On the other hand, England continue to sink deeper in the quicksand of ambiguity.

If you can afford to keep Jadon Sancho, Jack Grealish, Marcus Rashford and Bukayo Saka on your bench, the football needs to be box office enough to be on Joga TV. 1 goal in 2 matches doesn’t exactly scream, “It’s Coming Home” like it did in ’96.

And neither are we witnessing the French tunnel vision of results over everything, where a World Cup triumph makes up for a safety-first approach.

England need to find themselves before they find the answers.

No trespassing that Scotland back 5 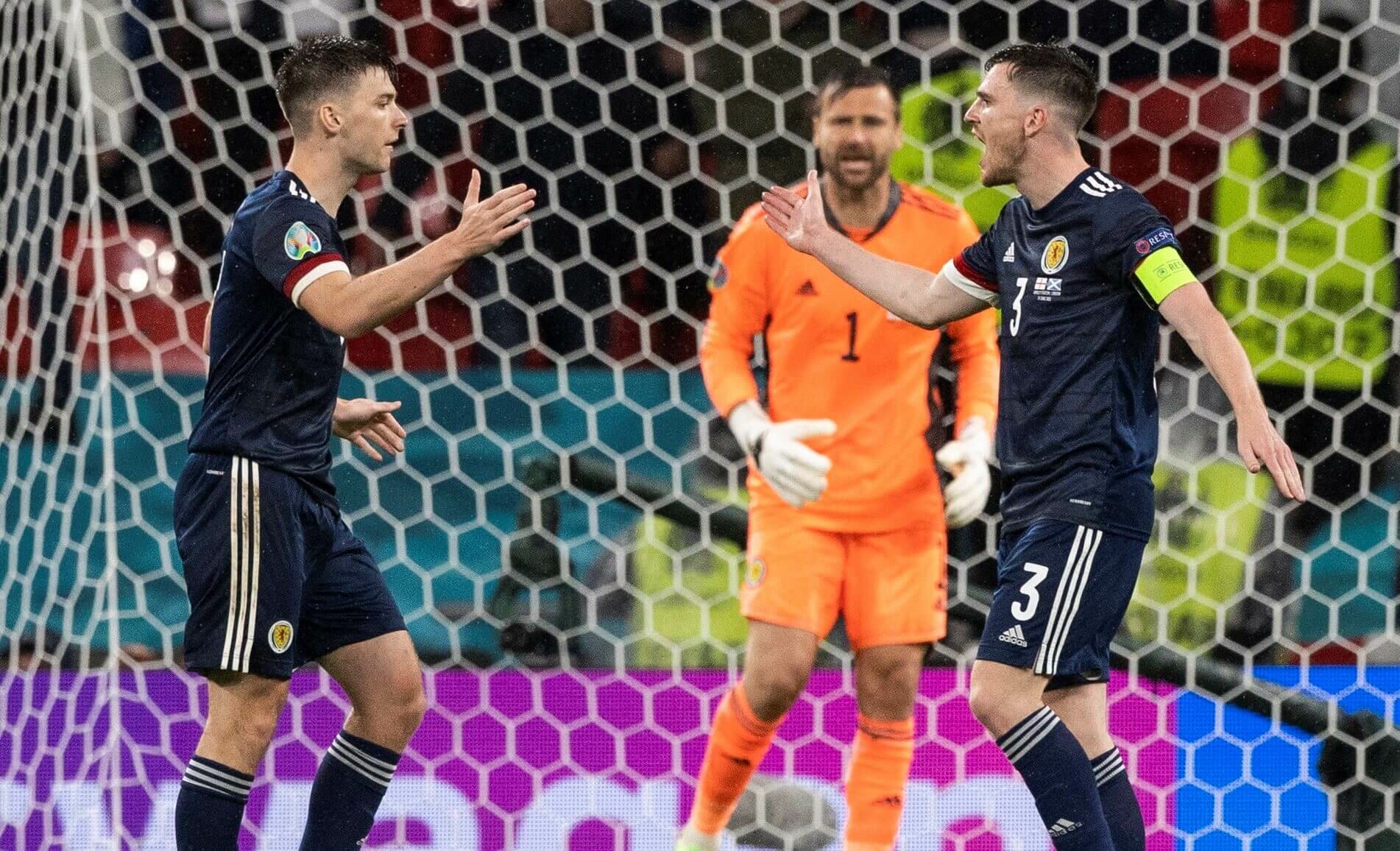 If there were any doubts over Scott McTominay starting on the right of a back 3, he dispelled them. If the prospect of Grant Hanley squaring up to the Premier League’s very elite was worrying, witnessing the Norwich City skipper be a beast in the air, perfectly positioned and making all the right decisions embodied Scotland’s heart over hype aura.

And you’d be forgiven for forgetting that Kieran Tierney came off an injury into arguably the biggest game of his life. If KT wasn’t whipping crosses in to Lyndon Dykes, he slotted right back into Scotland’s back 5 out of possession seamlessly. With two Champions League finalists in Reece James and Phil Foden on the right, the Tierney masterclass stood out on the left.

He makes a huge difference. 💪 pic.twitter.com/qiT9GxqcKN

His partner-in-crime, Andy Robertson is possibly the most compelling captain at the Euros. And this was yet another unreal triple act of switching between left wing-back, centre-back and skipper at Wembley.

And Steve Clarke already summed things up about his right wing-back.

“I should have started my interview with two words, “Stephen O’Donnell.”

A back 5 that could defend for beyond 90 minutes without conceding on the night.

Let’s get some things out of the way. Harry Kane does drop back way too deep. And yes, you find him in areas a No. 9 should never be in; case in point, left-back. And you’re right, he has been anonymous in England’s first two games.

But in a system where every attacking weapon the Three Lions have at their disposal looks meek and discombobulated, there is an element of scapegoating the England captain while Gareth Southgate gets away with murder.

After all, deploying Phil Foden on the right wing when he has been the outstanding young footballer in the world, alongside Mbappe and Haaland, shining on that left-flank is just bizarre. If the inverted winger experiment was the secret sauce, Pep Guardiola would have used it instead of sticking with Riyad Mahrez.

And while the call to back Raheem Sterling against Croatia worked wonders, you’re left scratching your head seeing the sole runner in the front 3 constantly want the ball to feet.

City’s No.7 is roadrunner in disguise and with him not using his sprinter-like speed to make those runs in behind, it begs two questions- Since Marcus Rashford profiles similarly to Raheem Sterling and has had a superior season, why doesn’t he slot straight in? If there’s no runners in behind, why doesn’t Jadon Sancho, one of the best 1v1 dribblers in Europe get a shot?

Harry Kane looks leggy, injured and a combination of both but Gareth Southgate’s ideas possibly look the most tiresome out there.

3 shots on target in 2 matches.