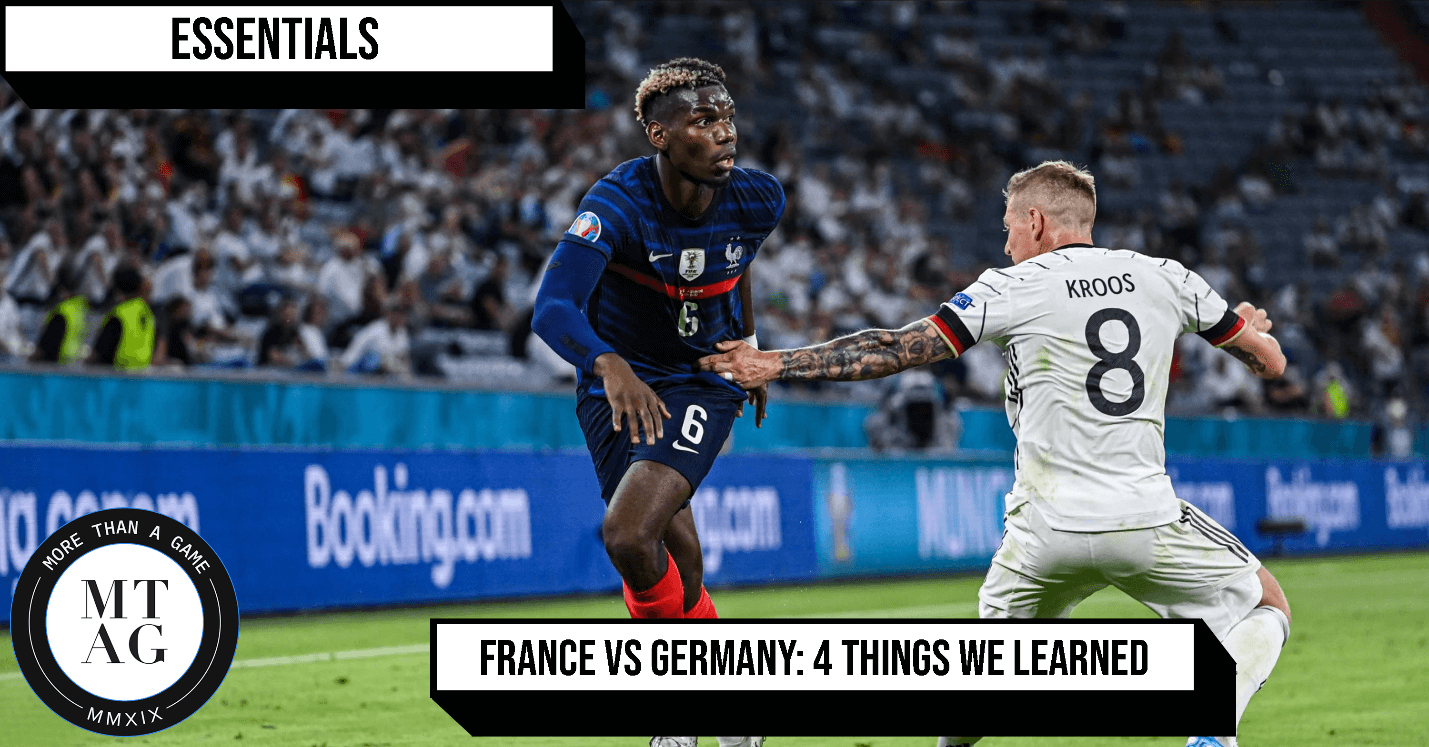 After France and Germany played a game out that exuded quality, MTAG: More Than A Game decided to touch on the 4 things we learned as Les Bleus ended up 1-0 winners on the night.

Despite the encounter delivering what was on the tin, the superstars galore were far from flawless. Passes going astray and first touches turning to second and third, the errors were unforced despite the class at the Allianz Arena.

Paul Pogba however, didn’t miss a beat. Be it dancing past Toni Kroos who eventually hacked him down or finding an impeccable pass from deep to send Mbappe sprinting, the World Cup winner looked like he didn’t just want to win, he wanted to take the mick while he was at it.

And that outside-the-foot pass to Lucas Hernandez is already the pass of the tournament. A moment of sheer genius from a man who gives the opposition the blues for Les Bleus.

What’s funny is, the more Pogba got into the game, the better he got while the Germans were embroiled in a cardio session from hell as they simply couldn’t lay a glove on the midfield maestro.

Despite rocketing the ball into his own net, Mats Hummels was Germany’s best defender. That should tell you everything you need to know about the state of this backline.

Jogi Löw went with 3 at the back, a setup that has been frowned upon by everyone in Germany, but he almost made it work against the world champions.

The absence of a traditional No.6 in midfield does not make things easier but on occasions more than one, it was just too easy for the Frenchmen to bypass the final line of defence. The industry of Hummels rolled together with his experience afforded him the license to tackle Mbappe in the box when he was just a whisker away from a certain goal.

Ginter and Rudiger had decent outings but at least one of them has to step up if Die Mannschaft aspire to qualify for the knockout stages.

The team was plagued with problems galore but the gaffer seems to have fixed most of them and it remains to be seen if he can address their apparent defensive shortcomings.

Jogi’s “Last dance” has started off with a defeat but there is ample time to turn things around.

There were suggestions in the build-up to Les Bleus coming out of their defensive shell more in Euro 2020 as compared to their World Cup triumph, considering the return of Karim Benzema. Didier Deschamps clearly didn’t tune into any of the barrage of pre-tournament previews.

As Die Mannschaft dominated possession from when the referee blew his whistle, France sat back, soaked the pressure and were meticulous on when to go for the kill like a tiger tiptoeing towards its prey.

And when the French did get their first scalp, albeit through a slice of luck, their coach’s instinct was to protect rather than pulverize.

It can be slightly puzzling to see a team that is stacked with enough talent for their U21s could play at the Euros to be as cautious as Deschamps’ men, waiting to catch teams out on the counter rather than call the shots and make oppositions chase shadows all game. But the brain behind the champions of the world would rather win than entertain and who can argue with him?

You could say France were playing with fire as they sat back enough for it to look like Germany were up against minnows that would eventually fold; remember, minnows don’t have Varane and Kimpembe in the heart of their back four.

And it was mission accomplished after Benzema put the ball into the back of the net, after a rapid goal on the counter, only for it to be chalked off. That was the plan all along but despite everything, the French formula to success isn’t changing anytime soon.

Forget the result and remember the positives

Thomas Mueller was fantastic, as he almost always is and so was Joshua Kimmich, who played an unfamiliar role as right wing-back to perfection, given that he was dealing with the menace of Kylian Mbappe. The midfield combination of Toni Kroos and Ilkay Gundogan took a bit more time, then they would have in adjusting to each other’s frequencies but that eventually happened.

About 55 minutes after the first whistle, Kroos and Gundo looked more comfortable in each other’s company. It was exactly after that when Germany could enforce their dominant, fluent football, creating a host of chances. The best of which fell to Serge Gnabry who astonishingly hacked the volley over the crossbar from 5 yards out, a chance you would expect him to bury, given his rich vein of form in the national colors.

For the first time in a long while, Löw’s selection was one that refused to be ordered around. The only thing missing was the flourish in the final third.

Kai Havertz, Serge Gnabry started the game while Leroy Sane and Timo Werner who came on later are all established and stupendous talents who on their day can render defences useless on their own.

Despite dictating the game for virtually all of the 2nd half, it was Neuer’s goal that saw the ball hit the net, twice. Close offside calls saved Germany from humiliation, but to be fair on the Germans, they did not deserve one on the night.

There were bright performances by both the wing-backs and ample chances were created that if taken would have at least salvaged a point.

Despite the suggestions that Germany would be the biggest disappointments coming into the Euros, the lionhearted display against the French would suggest they’ve been overlooked.

All the boss needs to fix is the strike partnership. If he can, Portugal will have a problem on their hands when they fly down to Allianz Arena in three days.