If the 1st half delivered, the 2nd disappointed. Yet, we left the game with English football’s biggest titans in Manchester City and Liverpool playing out a gripping 90 minutes of football in what was an evenly contested clash.

There were plenty of moments that were capable of grabbing the headlines, from Walker’s poor challenge and Salah’s penalty to Jesus’ excellent equalizer and De Bruyne shocking attempt from 12 yards out. Since it’s tough to round things off to one talking point, here’s our Ws and Ls from the Premier League’s box-office clash.

P.S: We haven’t even mentioned Guardiola and Klopp yet.

Here’s a nod of the hat to Football Twitter and it’s glossary of extravagant terms, for the lack of a better phrase in hailing this João Cancelo performance as indeed, a ‘monsterclass’. In the lead-up to English football’s outright blockbuster battle, you’d find more City fans that not, calling for Nathan Aké’s guaranteed defensive security as a left-back to start, considering the daunting prospect of facing a wave of attacks, courtesy of Trent Alexander-Arnold and Mohamed Salah. Cancelo shrugged off the doubters and made sure Mo Salah running down the wing only ended in the Egyptian being tackled or bullied off the ball throughout the contest.

Much like the likes of Bernardo Silva and Riyad Mahrez, João Cancelo is also undergoing a sophomore season of redemption, gradually becoming a nailed-on starter at left-back and quietly becoming one of City’s best players this season. While he’s earned his plaudits for his neat footwork and creating chances this campaign for the most part, the former Juve defender proved he isn’t too shabby defensively either, keeping one of the finest wingers on the planet quiet. If Gabby Jesus had finished his dinner for his gorgeous delivery, it would’ve capped off a brilliant display but oh well.

A ridiculously good outing for everyone to keep in mind for one of City’s forgotten men.

A proper captain’s performance from Hendo

One player who has arguably risen most in van Dijk’s absence is Jordan Henderson and this was yet another excellent display from the skipper. He barely put a foot wrong today with some excellent passes, breaking the lines, winning tackles, barking orders, closing space and the list goes on. You’d have to say he was probably Liverpool’s Man of the Match today with his performance.

If he continues to play like that over the course of the year, it’s hard to look past Liverpool to not at least challenge for the league till the very end, VVD or not. With Trent having suffered an injury, key players for the Reds are dropping like flies. However, an area where they are well-stocked with the likes of Keita, Fabinho and Thiago all to return to full fitness, Liverpool will not want to lose out on Jordan Henderson. Irreplaceable.

The mystery of “whether he meant it” when looking at Gabriel Jesus’ wondrous turn will continue to rage on but let’s give him the benefit of the doubt here. If the turn wasn’t enough, the sweetly taken finish off balance was. Barring City’s season opener against Wolves, Jesus hasn’t featured ever since and after coming back with a bang after his incredible finish off the bench in the Champions League, the Brazilian international was clinical once again.

There’s no running away from the fact that Pep Guardiola’s men haven’t been at their very best this campaign but missing the likes of Jesus and Agüero through injury has understandably hamstrung their attacking prowess till now. And Jesus’ inclusion exactly showed why. If his goal wasn’t clutch enough, he was always available for a pass, linking play up excellently at points and always on the heels of Liverpool’s centre-halves.

By no means was this a brilliant display from either Jesus or City but the return of that focal point in attack was vital and it showed. Ferran Torres showed signs that he looked the part in Jesus’ absence for all the times Sterling didn’t but there’s nothing better than the real thing.

Since VVD’s injury, Liverpool have coped as well as possible, with the likes of Fabinho, Nat Phillips and Rhys Williams ably deputizing. However, against City, they needed much better. They welcomed Joël Matip with open arms straight back into the XI along with Joe Gomez and the big man did not disappoint. The Cameroonian was imperious at the back, winning most of his tackles and headers, commanding the backline brilliantly.

If there was any weakness in his game, it could be said that his passing wasn’t up to his usually high standards. However, given he’s been out for nearly a month and his first game back was in what Klopp describes as the “hardest game in world football”, we will let him get away with it. 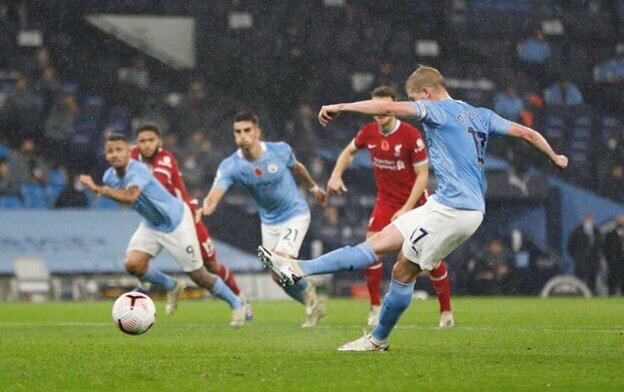 News flash: Kevin De Bruyne is human. We can wax lyrical about the Belgian midfielder for days on end and rightfully so but for once, De Bruyne wasn’t at the races. Despite bagging an assist, his 6th in all competitions in a period of just over 2 weeks for Jesus’ sublime equalizer, his penalty was horrific. To not even hit the target was poor but as they say, it happens to the best of us. Yet, you can’t shake off the déjà vu from Riyad Mahrez’s shocking penalty from 2 seasons ago at Anfield.

It didn’t cost City back then and they’d hope it doesn’t now. But even when he came back out for the 2nd 45, De Bruyne was uncharacteristically sloppy and also look knackered. Perhaps a factor could be the impact missing from 12 yards out had mentally that drained KDB. You never know. But the fact that he completed a mere 5 passes in the 2nd half which tells you all you need to know.

A rare off night for the virtuosic Belgian.

We need to talk about Roberto Firmino

Roberto Firmino has scored just 4 goals from 56 shots in the Premier League in 2020. Troy Deeney – who was relegated in July – has more PL goals than him this calendar year (7). Another disappointing game. 🤔 pic.twitter.com/SbcFltATcN — Statman Dave (@StatmanDave) November 8, 2020

Just what is wrong with Roberto Firmino is the question on everyone’s minds. The Brazilian can’t seem to do anything right at the moment. Whilst he had some excellent little lay-offs, they were a rarity rather than a constant and was rightfully hooked off at around 56 minutes. He missed a couple chances, especially one in the early minutes of the game and as City started to exert control, he started to fade away.

Liverpool will thank their scouting department once again which has proven to be standard procedure for having purchased the terrific Diogo Jota, whose arrival has meant that they are able to the Brazilian who has looked a shadow of his former self. Perhaps a few weeks of much needed rest for a man who has played nearly every game of football for club and country in the last 5 years can help Bobby rediscover his form of a few seasons ago.

You either play or get played and Walker got played

Let’s get a couple of things out of the way. Kyle Walker has been City’s best player this season, bar none and is probably one of the most complete right-backs out there. For Roy Keane to label him as an “idiot” and a “car crash” speaks volumes of the reactionary punditry that goes hand-in-hand with the appalling brand of analysis brought to you by ex-players from the English game. Be that as it may, that was naive from Walker and he needs to do better. Much better.

Sadio Mané took a page out of Jamie Vardy’s book in running across Walker and giving the England international a split second to make a decision. On both occasions, the Yorkshireman took the wrong one and all Ederson could do is pick the ball out of the net.

For all of Walker’s consistent brilliance and physicality that’s proven to be a cheat code, if there’s one area where there is room for improvement, it’s his awareness. Case in point: FA Cup semi-final, losing his man, Aubameyang in the box for Arsenal’s No.9 to finish.

Various instances over the course of Klopp’s reign have seen him switch to a 4-2-3-1 system. We saw it all around the Christmas period of the ‘18/19 season, a few times last campaign and then a couple times during this one. Whilst there’s no denying that the formation with everyone fit and firing could prove to a serious threat, what must be said is that the key player to this system is Fabinho. The anchor man in midfield covers so much space and his spidey-like senses to danger make him perfect for a side playing 2 in midfield rather than 3.

While Liverpool started with some slick passing amongst the front 4, it became difficult as the game progressed, seeing De Bruyne drop deeper in support of the midfield rather than playing in the hole behind Jesus. This meant City had a stronger foothold and Liverpool were somewhat fortunate they weren’t at their silky best.

The 4-2-3-1 is definitely an option moving forward but it needs Fabinho to be a success.