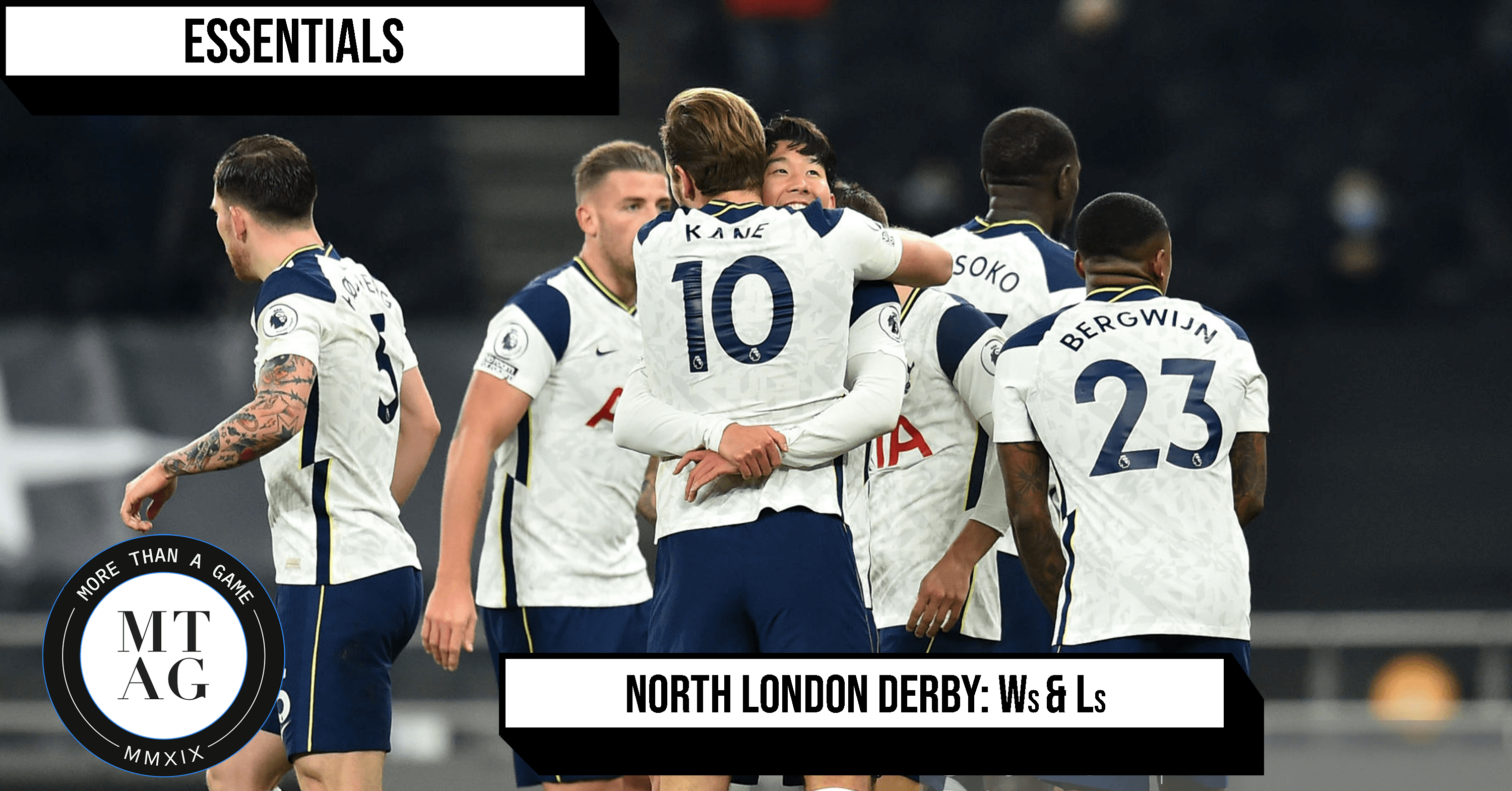 Despite the build-up to the North London Derby always being tense, with plenty of speculation around how both the sides were worlds apart in terms of form, there was an overriding sense of the footballing cliché about how “form goes out of the window in derbies”. Arsenal fans could find solace in this while the Spurs fans knew better than to do get ahead of themselves.

Merit however proved to be the deciding factor as José Mourinho had a plan and executed it to perfection with Harry Kane and Son Heung-min stealing the headlines once again. Mikel Arteta on the other hand, is entering unchartered waters with Arsenal’s worst ever start to a Premier League season and questions over whether the job is way too big for him have turned from murmurs to full-blown conversations.

In what was yet another derby day full of narratives, both old and new, here are the Ws and Ls from a deserved 2-0 victory for Spurs over their arch rivals, Arsenal.

The South Korean wizard and the England captain have been in scintillating form since the season began and have been scoring at will in games. Harry Kane laid on yet another assist for Son Heung-min who took the ball from the halfway line to the edge of the area and unleashed quite a mesmerizing strike which nestled into the top corner, giving Berndt Leno no chance.

The Asian Player of the Year returned the favor to Kane when he set him up later in the first half for a great chance which was thundered in by Londoner for his 11th North London Derby goal which marks him out as the all-time top scorer in this fixture.

The pair have 31 combined goals and are only 5 behind Didier Drogba and Frank Lampard (36) in becoming the Premier League’s greatest double act in history.

There’s no denying that they are the best in the world at the minute.

Mourinho Ball at its devastating best

For all of the discussion about how José Mourinho’s brand of football isn’t easy on the eye from the likes of Graeme Souness and Jamie Redknapp, much like everyone else, they had to give the Portuguese his flowers for taking Tottenham to the next level with his model. The way Spurs controlled the match despite conceding bucketloads of possession was extremely impressive as they were immensely efficient with their attacks and were able to hurt Arsenal whenever they countered. Both the goals were an excellent example of breakaway goals and under José Mourinho, they tended to sit back in the bigger games with increasing success.

Yet another has slipped by and we still see a Mourinho team at the top of the table, while many sceptics would say (quite rightly) that it is too early to make predictions. Still for the Tottenham faithful, the belief keeps getting stronger with each passing performance.

Mou is a man with a plan and much like his brilliant win against Manchester City, this once again has been a masterclass.

Pierre-Emile Højbjerg: Signing of the Season

Pierre-Emile Højbjerg was brought in at a paltry sum of £15 million and he has been an absolute rock in the middle of the park for Spurs. The Danish international helped the team to a 4th successive clean sheet and did his absolute best impression of N’Golo Kanté, covering each blade of grass and winning almost everything that he contested for.

He was the fulcrum at the base of that midfield for the Lilywhites and was instrumental in ensuring that even without being in possession Tottenham never truly lost the midfield battle. His tenacity, consistency and stamina make him an indispensable member of this Spurs squad and one of the first names on Mourinho’s team sheet.

The engine behind Spurs’ well-oiled machine.

Arteta failed to plan and planned to fail

On one hand, you have the antithesis of spontaneity in José Mourinho, a man who refuses to veer from a method that is not only tried and tested but has also garnered 20 major trophies. And on the opposite end of the spectrum, you have Mikel Arteta.

Let’s add a caveat by putting it out there that there’s no running away from the fact that the personnel he has to work with are out of their depth. Sure, he’s come into one of the toughest jobs in world football, given the impression that he strives to inculcate a much-needed culture change at Arsenal and made sure the players and fans trust his process. But 11 games into the season, with 6 defeats, being 15th place in the table and Arsenal suffering their worst start in 45 years painting a picture as grim as can be, we have to question what Arteta’s process even is at this point?

If possessional dominance is the core of the blueprint, where does discovering what to do with it come into the picture? You don’t have to be the second coming of Bielsa to get to grips with the fact that Arsenal have no answers going forward and the fact that Pierre Emerick-Aubameyang’s penalty against Manchester United was their last goal speaks volumes. If this tells you the Gunners have no creative plan, the stat about spamming 44 crosses against Spurs, the most by any team in the league this season slaps you in the face with it.

Things aren’t much better off the ball. If Arteta’s plan is to sit back and refuse to press, why does the team still get murdered on the break? If the side does sit in and wait for the opposition to concede possession, shouldn’t Arsenal also have a counter-attacking approach?

There’s no way back for Bellerín

Off the pitch, there’s a lot to like about Héctor Bellerín- from his vocal stances on environmental consciousness and mental health, his input on collaborations with fashion brands such as 424 and KidSuper and his hybrid Spanish-Londoner accent. On the pitch, this list isn’t as long to say the least.

Against Spurs, you can point many fingers at him. Bellerín’s crossing was appalling and he constantly lost the ball during the contest, triggering Tottenham’s razor-sharp counter-attacks for both goals. What’s worse is he was exposed positionally, getting caught way too up the pitch as well on both occasions, especially for Kane’s strike in which he practically handed Holding his responsibilities as the centre-half was left on his own to mark both the England captain as well as Son Heung-min.

And then there’s the basics. In the 16 foul throws taken this season, Bellerín has taken 5. How a pro footballer that plays in the Premier League does this on a regular basis is beyond the comprehension of everyone that’s watching.

Ainsley Maitland-Niles isn’t a natural right-back but has proven to be an extremely handy footballer for his versatility. Cédric Soares is, on the other hand but he isn’t in his prime to put things modestly. But surely, Bellerín can’t get away with these performances any longer?

What is Granit Xhaka?

He isn’t a great defender. He isn’t mobile. He isn’t fast. Granit Xhaka’s range of passing has been singled out at his standout trait since he arrived at London Colney and while there’s no denying it can be excellent, you press the Swiss captain enough and you might as well bet your house on him having a howler.

In one of English football’s biggest derbies, keeping your head is a prerequisite. Unfortunately, Xhaka seems to have missed that memo from the day he put on the Arsenal strip. If swearing at his own fans last season wasn’t shambolic enough, fouling Harry Kane thrice in the first 45 just goes to show that ability aside, there’s a shocking lack of self-awareness in a player who captained the club in the recent past.

Constantly getting entangled in needless scraps and offering just about nothing as a deep-lying playmaker, the question is what the fuss is about Xhaka?

Defining Granit Xhaka will lead to conspiracy theories about what the man actually offers one day.