The stage was set at the Ring of fire stadium in Dubai for an enthralling encounter between the table toppers Mumbai Indians and Delhi Capitals in the first qualifier of the 2020 IPL Playoffs. However, the game had a rather anti-climactic ending to it, much like this intro if you’re reading this as the Mumbai Indians rolled over the Delhi Capitals with ease and made it to the finals for the 6th time.

Going into the game, Mumbai had defeated Delhi twice in the group stages rather convincingly and the Capitals were looking for revenge with the reward of entering into the finals for the first time ever. But MI once again showed their prowess and proved why they are considered one of the most complete teams in the tournament, defeating DC by 57 runs.

From Ishan’s brilliance to Boult’s fire up top, here are the hits and misses from a fairly one-sided encounter between the two sides. 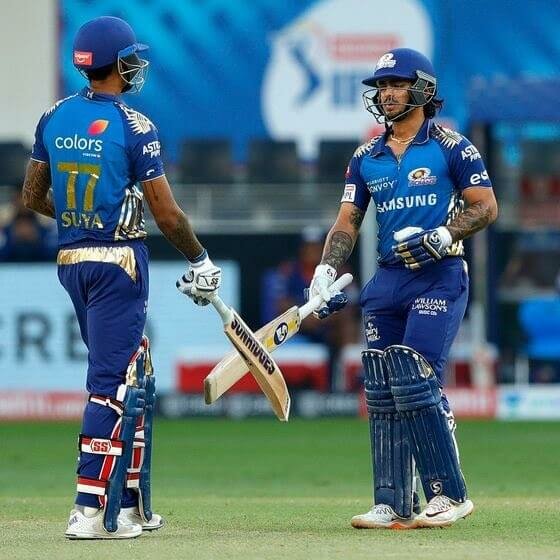 While there has been enough talk surrounding Suryakumar Yadav missing out on a place for the Australian tour, the man from Mumbai has continued to do what he knows best- score runs on a consistent basis. The right-handed batsman came in after the captain, Rohit Sharma got out for a duck but that dismissal couldn’t rain on his parade.

His stroke play was at its fluent best as he continued to play his shots and maximized the powerplay overs along with Quinton de Kock. Once the South African was dismissed, Suryakumar made sure that the momentum didn’t swing towards the Delhi Capitals as he played a fine knock, scoring 51 off 38 balls.

With all the talk surrounding Suryakumar Yadav, it would be unfair to ignore the young Ishan Kishan who has been brilliant ever since coming into the side in this year’s tournament. After Suryakumar was sent to the pavilion, the southpaw took his time initially to settle into things before launching into the DC bowlers in the death overs. The pocket dynamo’s burst at the end, along with Hardik Pandya’s was vital to MI finishing with an above par score of 200.

Suryakumar Yadav and Ishan Kishan have been highly influential to MI’s success in IPL 2020 and it is for the first time that two uncapped players have scored more than 400 runs in a season for a particular franchise. Only time will tell what other feats these two players can achieve in their career but you wouldn’t bet against this pair.

Boult and Bumrah: Name a better pace duo in the IPL, we’ll wait.

There is a particular identity to Mumbai Indians’ brand of cricket over the years in the IPL and defining that identity are elite fast bowlers and their ability to pick wickets up top. From Mitchell Johnson and Lasith Malinga to Mitchell McClenaghan and now the torch has been passed on to two of the world’s premier quicks in Jasprit Bumrah and Trent Boult. Both the pacers have been exceptional for MI in this season’s IPL and once again, they showed their class in the first qualifier.

Defending a total of 200, Boult provided a dream start to MI by getting rid of both Prithvi Shaw and Ajinkya Rahane in the very first over. From the other end, Bumrah provided the support that was required by dismissing Shikhar Dhawan through a brilliant yorker and the score at that moment read, 0-3. Shreyas Iyer played a couple of quality shots and showed promise but Bumrah had other plans and those included getting him out in his second over. While Boult went out with a minor groin injury, Jassie continued his brilliance and ended the game with figures of 4 for 14 in his four overs.

The pair of Bumrah and Boult have together picked up 49 wickets and MI would be hoping that the injury to Boult is a minor one and he’s able to recover before the final. Fast bowling of the highest caliber.

Ashwin and Stoinis give DC something to cheer about

When a team concedes 200 runs and loses the game by 57 runs, it becomes very hard to take any positives from such performances. But both Ashwin and Stoinis must have provided coach Ricky Ponting with some reasons to be optimistic going into the second qualifier.

In the first innings, Ravichandran Ashwin provided Delhi with a brilliant start, dismissing Rohit Sharma for a golden duck. However, the runs kept on flowing from the other end as the spinner did not receive the support he needed from his fellow bowlers. Ashwin continued to bowl the tight lines for which he is hailed and got rid of the dangerous looking de Kock first and then dismissed the mighty Kieron Pollard.

In a game where the DC bowlers were taken for plenty, Ashwin finished his spell with impressive figures of 3 for 29.

In the second innings it was Marcus Stoinis who impressed with his batting performance. With the others around him falling like a pack of cards in a massive run chase, the Australian maintained his composure against the likes of Bumrah and Boult and then attacked the rest of the bowling unit.

The right-hander took a liking to Rahul Chahar as he smashed the leggie for 28 runs of the eight balls that he faced. The Capitals would be hoping that Marcus continues his good form with the bat in the hopes of making it to the finals.

The Delhi Capitals’ pacers had a night to forget

The strength of the Delhi Capitals team this season has been their pace attack with the duo of Rabada and Nortje picking up 44 wickets amongst themselves in the group stages. In a high-pressure game against the formidable batting line up of Mumbai Indians, Delhi needed their pacers to be at their best if they were to have any chance of making it to the finals in the first attempt. However, all the three fast bowlers (Daniel Sams included) were neither able to pick regular wickets nor able to restrict the batsmen.

Between overs 7 to 14, Delhi managed to pull back the game a little conceding only 45 runs and picking up three wickets. But they ended up conceding 92 in the final five overs with a solitary wicket. All the three finished with an economy of more than 10, which is highly disappointing for a side whose strength lies in their pace bowling.

The Delhi pace attack need to leave this performance behind them and get back to their best if they’re to have any chance of winning the tournament.

In the second innings of the match, it felt as if you were watching the highlights from Delhi’s previous batting display. Prithvi Shaw, who has been dismissed by Trent Boult thrice in this season got out for a duck. To make matters worse, the likes of Rahane and Dhawan also didn’t trouble the scoreboard and chasing a target of 201, the Delhi side had lost their top three without getting off the mark.

It felt like that the top order of the Delhi Capitals had no answers for Mumbai’s lethal pace attack. Having a batting collapse against the same side may also affect the Delhi batsmen mentally if they are to reach the finals.

With only a handful of days left in the tournament, coach Ricky Ponting has a task on his hands to get this batting order firing if they’re to have any chance of facing the Mumbai Indians once again.

A rare bad day at the office for Rahul Chahar

@ImRo45 asking Rahul Chahar to lead the side towards the dressing room after the match ended….

Being the only recognized leg -spinner in the Mumbai Indians team, Rahul Chahar has been exceptional for the franchise in this season. The leggie has been effective in not only taking wickets when required, but also in restricting the batsmen from scoring at a quick rate. But against the Delhi Capitals, Rahul was taken for plenty in his two overs.

Marcus Stoinis, the only Delhi batsman who looked in some sort of touch, smashed the leg spinner to all parts and didn’t allow him to settle at all. Chahar bowled only two overs and conceded 35 runs without picking a wicket.

However, one can overlook such performances on a day where the pace attack had all but won the game for the side. Despite this, the lad oozes quality and he’d be hoping to get back to his best for the big final.