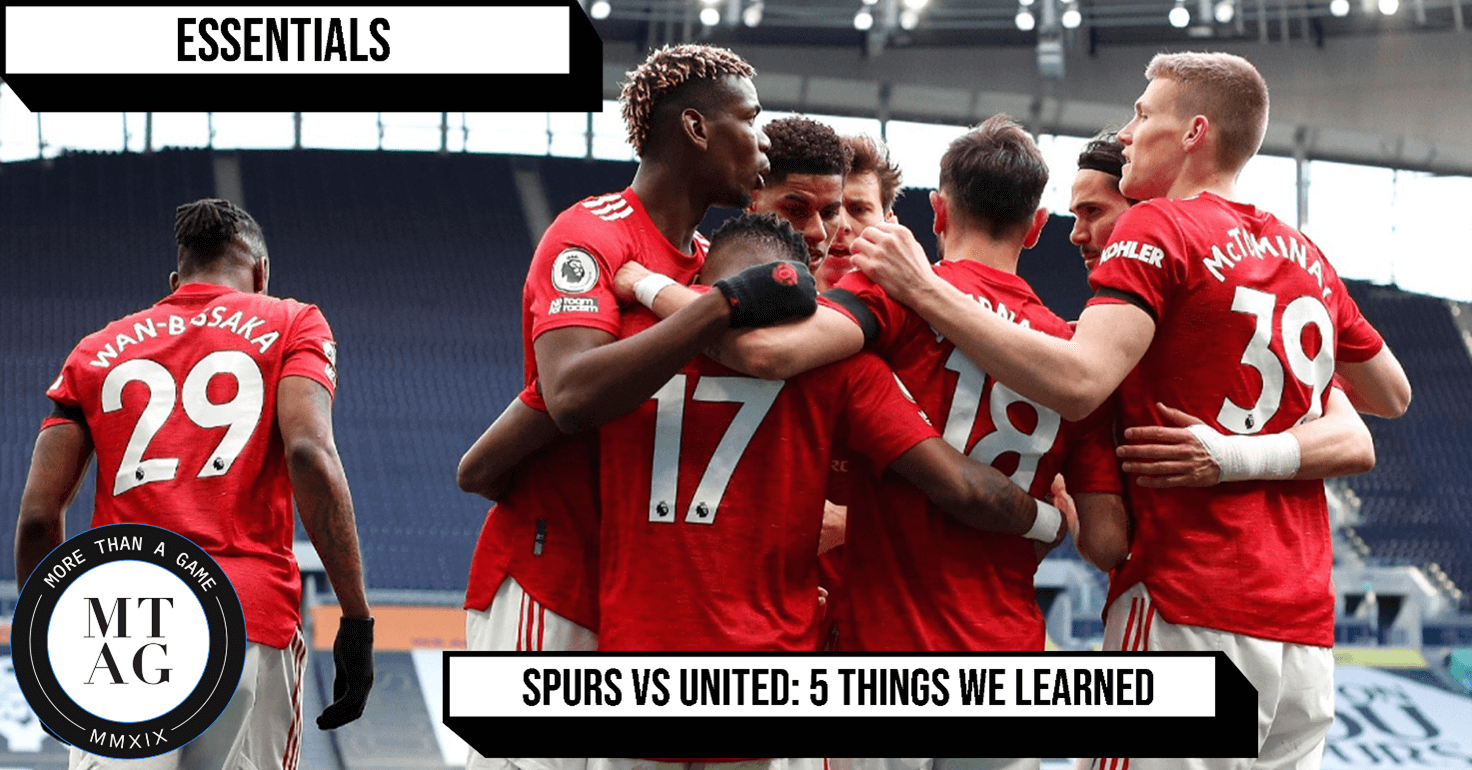 Manchester United turned up to the Tottenham Hotspur Stadium and looked like the home team as they swatted away a Spurs side that had no answers for their magnificence on the day. With Fred, Edinson Cavani and making Son Heung-min’s opener look like a thing of the past, amidst a refereeing shocker and much more, here are the 5 things we learned from Spurs vs United.

Edinson Cavani is the best No. 9 at Manchester United

34, riddled with injures, new challenge in a tough league. Nothing seems to faze Edinson Cavani. Even in this latter stage of his career, the Uruguayan is committed to the sport like only a few others. He runs, he tracks back, he lunges for headers and fights for every ball hit in his direction.

An absolute tank, and it all showed tonight when he flew in to score Manchester United’s second goal. United’s brand new No. 7 put the ball into the back of the net twice, only one of which counted, courtesy of a horrible refereeing call if we’re being honest.

The striker’s appetite is never quite satisfied which is why you could see him darting into the box even in the 93rd minute of the game.

In a game that had Harry Kane on display, it is a testament to Cavani’s talents as he came up trumps as the best striker on the night.

With Anthony Martial bang out of form this season and also out because of injury, the former PSG frontman could be and should be a mainstay in the Red Devils’ attack for the rest of the season. As for United fans, it is a treat to see the man play!

It isn’t VAR, it’s the referees

The Diogo Jota offside call is where you lambast VAR and put your customary “it’s ruining the game” tweet out to the world. Chris Kavanagh barely even reviewing the Son Heung-min’s collapse to the floor and disallowing Edinson Cavani’s goal has nothing to do with VAR. That just sums the state of refereeing in the Premier League.

To say there’s any intention behind Scott McTominay’s flailing arm towards the South Korean is trying to sell a comb to a bald man- it doesn’t add up. If it wasn’t for Manchester United wiping the floor with Spurs in the 2nd half, the outrage from the red half of Manchester would have been inescapable and delving into the incident, it had every reason to.

At this point, you’re used to the standards of refereeing being a farce but you can never actually get used to it. Someone tell Daniel Day Lewis that one of his Academy Awards needs to be sent to North London.

Go away from home, concede, comeback, conquer. And repeat.

Eyes on the prize for Ole

Manchester United have been sluggish, uninspired and at times, just plain poor this season. But for all of their issues, they have been swashbuckling away from home. Ole’s men will raid your fortress, break it down and put their flag on it.

The red half of Manchester travel, they concede, then they score and then they win. For quite a while now, this has been the routine which has seen them amass 28 points from losing positions.

Manchester United still are the comeback kings. The team is more cohesive, rampant and over time, the manager’s substitutions have worked like a charm. Mason Greenwood came off the bench tonight to create the goal that completed the comeback and then scored another to seal the 3 points.

Ole Gunnar Solskjaer has adapted to say the least. If only United’s home form was even remotely as good as their away run, Manchester City would have had a tougher challenge at the top of the league.

Putting Spurs and defending together is an oxymoron

If you’re squinting and have your smartphone by your face to try and analyze those goals, you’re overdoing it. A mere glance and you already know it’s a shambles and that’s that.

Christmas came early for Manchester United as Tottenham embraced the spirit of generosity, with Eric Dier giving the first gift, staring at the ball like it had the answer to life after death as Cavani darted past him to open the scoring. Of course, Chris Kavanagh was touched by Dier’s giving spirit and decided to reward Tottenham himself with a laughable call.

Despite Son Heung-min putting the North London outfit 1-0 up, Fred levelled things up after Joe Rodon lost his marker in the seasoned Cavani and Dier played him onside for the Brazilian to tap home.

As soon as Sergio Reguilon got ‘megged by Bruno Fernandes in the build-up to the 2nd goal, one expects the ‘Wasted’ memes from Grand Theft Auto went to go being in the drafts to taking over the Internet. After that of course, Serge Aurier was caught woefully on his wrong side as the Urugayan nodded in a brilliant Mason Greenwood cross past Hugo Lloris.

The final nail in the coffin is Paul Pogba dancing past Hojberg, Greenwood going past Reguilon way too easily and Lloris conceding yet another near-post howler which has become standard procedure for a man considered one of the best in between the sticks.

The word you’re looking for is shambles.

Luke Shaw and Paul Pogba remind Mourinho of his mistakes

Cavani’s name may be on the scoresheet but how good were Pogba and Shaw?

A few years ago, Luke Shaw suffered an injury that would’ve ended his career even before it began and he was on his way out of Manchester United. Now, he is the first name of the team sheet and probably the best left-back in the league. Inspirational. The England international drives forward like a winger, finds passes like a midfielder and is robust on the left side of that backline like any sturdy central defender.

United’s left side when attacking is frightening if you are a defender. Shaw runs in and usually there is Paul Pogba to supplement a gorgeous one-two-one passing sequence. Since his return from injury, Pogba too has been delightfully creative, as if on a mission to justify his price tag. The World Cup winner bossed all of the Tottenham midfield on his own today, walking away with an assist. Exquisite touches in tight corners of the pitch and his pure brute physical strength had all of Tottenham on strings. It only remains to be seen if he can replicate this form every weekend.

Paul Pogba completed 6 take-ons today, he hasn’t completed more than that in a Premier League game since his return game against Southampton in 2016. [@StatmanDave] pic.twitter.com/xA571ceHC5

Jose Mourinho at his time at United had almost ostracized Pogba and Shaw and it was poetic justice to witness the reinvigorated pair put a dent in Spurs’ top four hopes.