The Champions League. That’s it. That’s the intro. You’d think this is in jest but what more do you really say? From Angeliño’s Dennis Bergkamp-esque strike to cap off the most random of braces and Marcus Rashford making the Parc des Princes his playground once again to a Shakhtar masterclass against Real Madrid where they were missing 10 players due to COVID-19 and Bayern brushing Atleti off like flies, we’ve seen everything.

Here’s MTAG doing their level best to round up what was yet another reminder of why there’s nothing bigger and better than Champions League nights.

Bayern are on top of the food chain

A mere 58 days ago, Bayern quenched their European thirst when they finally put their hands on the Champions League. Marred by a pandemic and one-legged knockout ties, doubters did what they do best, question the Bayern side. But we know how that ended and a campaign later, the Bavarians are still the same devastating force that might just go on and do it all over again. Two goals at the side of each half, Hansi Flick’s cyborgs knocked the air out of Simeone’s mere mortals and boy did they do it in style.

Atlético never were going to test Neuer throughout but you’d bet your life savings on Simeone’s side to defend for their lives. But if you did, you’d lose all your money come the end of the 90 minutes. Bayern were tactically on point for every ticking second and in process scored four, each one better than the other. While Bayern’s standout winger, Serge Gnabry was sidelined due to COVID-19 and goal machine, Robert Lewandowski had no part to play in the goals, wingers and midfielders chipped in and thunderously.

Coman had thrusted Munich into party when he put the ball past Keylor Navas in the finals and as if riding on the same form, he did open the scoring last night too. But unlike the finals, the scoring didn’t stop at one. Caressing the perfectly weighted pass by Kimmich, the Frenchman passed it into the net and then followed it up by dribbling right from the centre of the pitch to the box, sitting two defenders down and then slotting it home, again. A Tolisso wonderstrike and a piledriver by Goretzka set the dominating tone which Atletico could never wear off.

Defensively solid, attacking like a unit and completely taking the game by the scruff of its neck, this is a side that’s going to put one big title defence.

Axel Tuanzebe: A Star Is Born 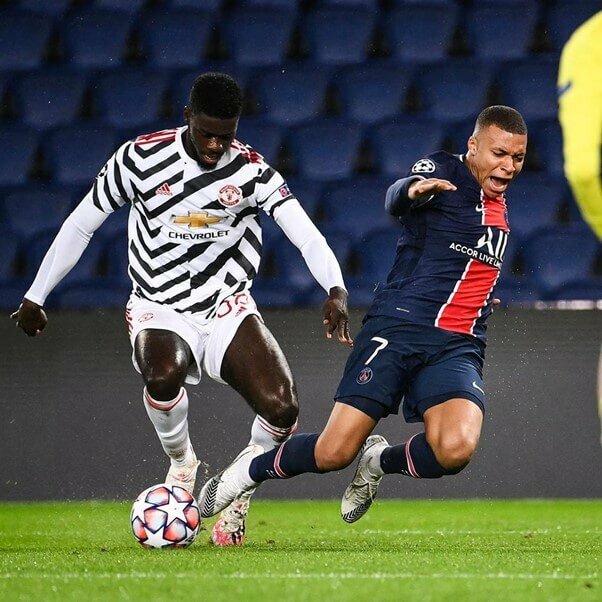 Ole Gunnar Solskjær’s transformation from an interim incharge to the head coach of Manchester United was kickstarted when Manchester United overcame a 2-0 home deficit and stunned PSG in their own mansion a couple of years ago. Deemed then as a fluke, the Norwegian just went and did it again. United are a formidable opponent when they counter-attack, channeling the raw pace of Anthony Martial and Marcus Rashford, aided with the exquisite vision of Bruno Fernandes. But none of these high-flying superstars quite made a name under Parisian lights like the young Axel Tuanzebe.

With the recent defensive woes and a comedy of errors in the backline that could put Seth Rogen to shame, United seemed destiny-bound to get hammered at the hands of the French champions. Amongst all of the rosters in the Champions league, there might not be a defensive pairing as languid as the dismantled duo of Harry Maguire and Victor Lindelöf. On the opposite spectrum, there might not be a player as explosive as Kylian Mbappé on the planet. Clearly, the story seemed to be written pre-match, but what followed was startling to say the least.

Tuanzebe stepped up and almost single-handedly kept the ferocious attacking prowess of Paris Saint-Germain at bay. Winning every duel he leaped for, every tackle he slid for and completing 100% of his long passes the 22-year old, put on a show to be proud of. With Mbappé trying to burst past him on three occasions, the young buck not only had the pace to match the World Cup winner, but tackles so clean you’d find them in a book on the art of defending.

Moving on from Paris, Ole’s men do have an arduous month ahead that won’t just test the gaffer’s mettle, but might even render him jobless at the end of it. But there’s hope for that last line of defence before De Gea as Aaron Wan-Bissaka and Tuanzebe showed what they’re capable of. A dynamic young centre back with a calm head and a penchant for a crunching tackle and electric pace to back it up might just do the trick. For decades, the academy has answered United’s call for help and bailed the club out and so seems the case even now.

No Ramos, No Party

Shakhtar had the measure of Madrid’s defence as they looked completely out of sorts without Sergio Ramos on the pitch. It was clear that Madrid missed their skipper’s leadership as Raphaël Varane and Eder Militão seemed a culmination of being switched off and clueless as the Ukrainians broke their lines on the counter, constantly. Meanwhile, Marcelo failed to handle a very pacey Tetê who ran the show for them. While, Varane had an evening to forget as he scored a scrappy own goal and also failed to track the run of Solomon who eventually made it 3-0 for the visitors.

While Los Blancos did almost draw things level at the end, Zidane will be hoping this rustiness will be brushed off with the Clásico in 3 days.

A proud evening for La Masia

Barça started their 2020/21 Champions League campaign with a bossy 5-1 win against Hungarian champions, Ferencvárosi. It was the two 17-year-old’s, Ansu Fati and Pedri who got a goal each as the pair continued their superb form this season. For starters, Ansu showed a lot of maturity as he made the right decision at every decisive moment. The pass to Coutinho for the third goal was absolutely exquisite as he saw no way through, and backheeled the ball to the unmarked Brazilian who made easy work of the strike.

Pedri also showed a lot of quality on and off the ball. His workrate off the ball has been praised a lot in the past few weeks and the grind paid off once again as he made a crucial tackle that ended up resulting in a goal for Dembélé. The Frenchman returned the favour as he assisted Pedri as Barcelona bounced back after losing to Getafe on the weekend and before the all-important Clásico.

Two of La Masia’s finest doing the business on the biggest stage. Music to any cule’s ears.

Liverpool pass the first VVD-sized hurdle by grinding it out

Liverpool bounced back well from derby disappointment at the weekend, grinding out a 1-0 win away at plucky Ajax to kickstart their Champions League run. There were question marks over the 6-time winners’ defence and how it would cope in the absence of Virgil van Dijk and the centre-back pairing of Fabinho and Joe Gomez came up big with the former producing an acrobatic goal-line clearance to smother the hosts’ biggest chance of the match.

Not bad for their first game as Liverpool’s centre-back pairing. pic.twitter.com/8JVIYv7gIL

After an end-to-end first half, Klopp withdrew all of his front three at once, a bold move that paid off with their replacements helping see the side over the line.


A dogged performance that will boost the Reds’ confidence after a poor run of results. Liverpool have a tendency to not be at their best and yet, continue to graft their way to 3 points and with Klopp’s men doing so once again in what could have been a potential upset, this could well be the template going forward, minus VVD.

If you’re reading this, you’re wondering how and why Kyle Walker’s under the microscope in a game where İlkay Gündoğan settled things in style, rocketing a freekick while Ferran Torres came off the bench and bagged a debut goal in the Champions League. A 3-1 result doesn’t exactly scream defensive masterclass as well so the raised eyebrows are understandable. But if there’s one thing that needs to be said more often, it is that Walker is perhaps City’s most consistent performer and a name who gets criminally overlooked.

Despite Pep Guardiola’s men putting on a drab display in the first 45, from the first whistle to the last, the Yorkshireman was everywhere. His goal line clearance may make it to the highlights, but to round it off to just that is both lazy and unfair. Be it alternating between dropping into a back three when City were in possession and stepping into midfield whenever needed or using his pace, which is practically a cheat code to give none of Porto’s forwards even a sniff, Walks quietly went about his business and put in another 8/10, as per.

After pocketing Aubameyang on the weekend, he’s followed it up with yet another brilliant 90 minutes. This season alone, he has played each and every minute across all competitions. If that doesn’t tell you he’s the first name on Pep’s team sheet, what will? 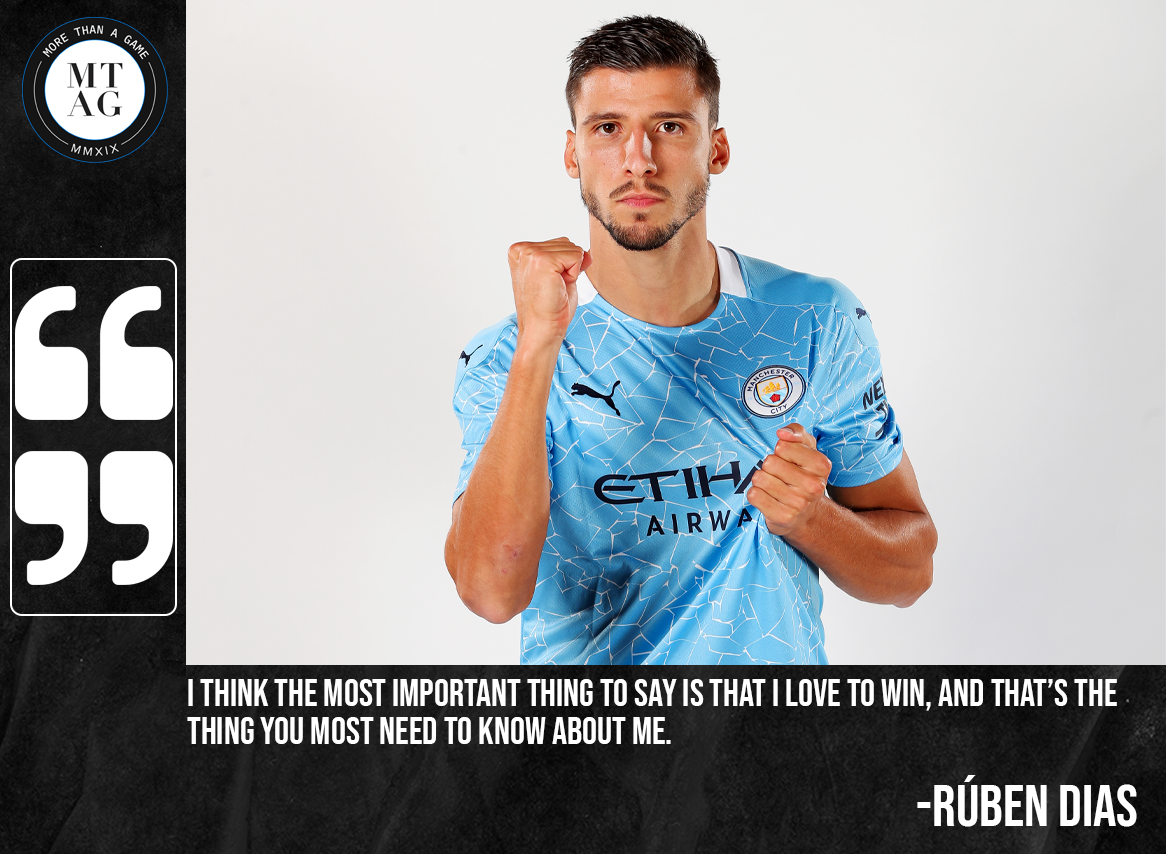