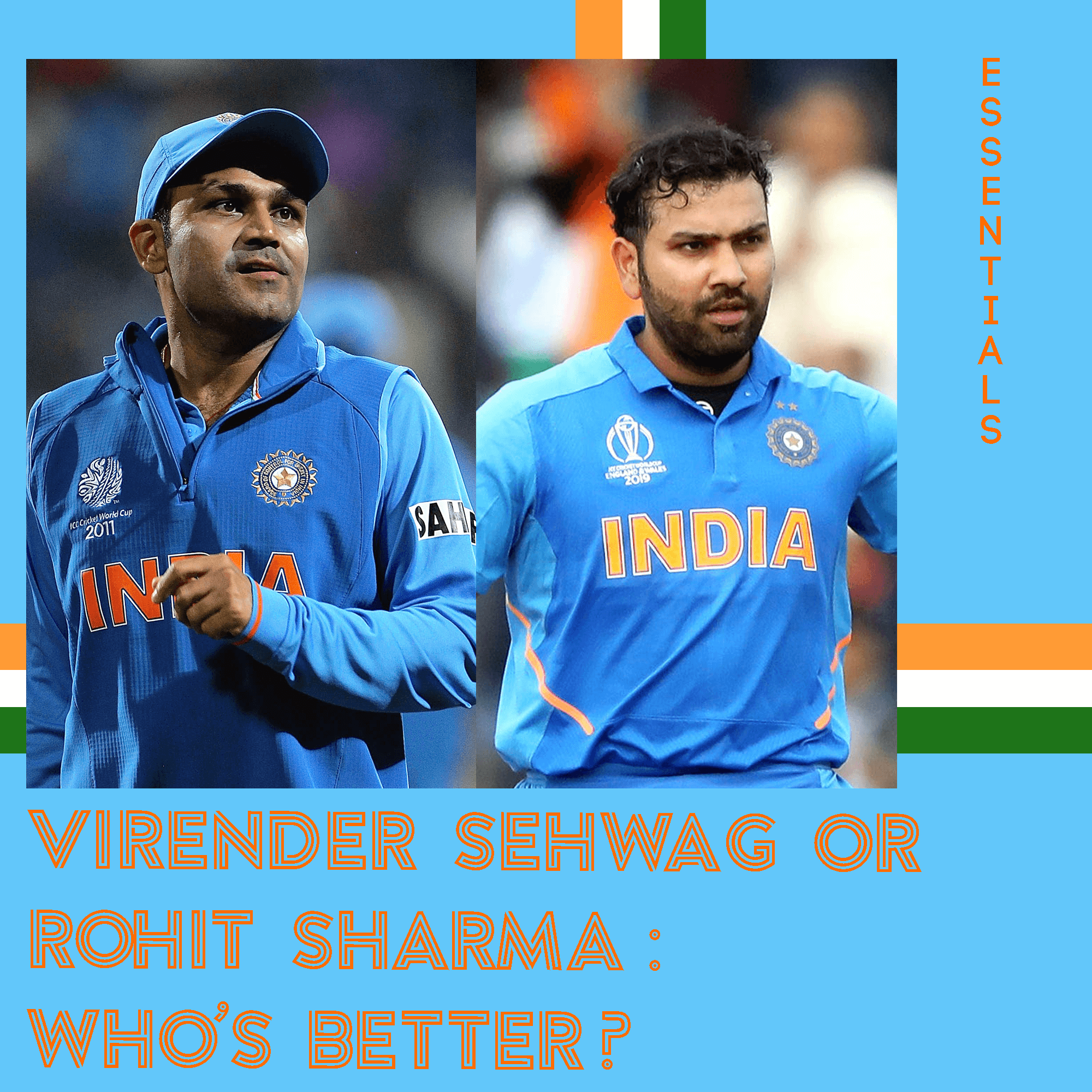 The post-2000 era didn’t see a lot of natural opening batsmen in India. India managed to go through the span of five years with merely five batsmen- Sachin Tendulkar, Sourav Ganguly, Gautam Gambhir, Rohit Sharma, and Shikhar Dhawan. These 5 have been the mainstay in the opening slot throughout these years.

Among these players, two of them have made a name for themselves because of their aggressive approach and the ability to go broke while being on the money- Virender Sehwag and Rohit Sharma. While Sharma is dominating the batting charts currently, Viru bossed it back in the day.

Hitman has been India’s mainstay at the opening slot for since 2013 and he’s never looked back, emerging as Sehwag’s successor.

But the question is, who comes out on top: Sehwag or Sharma?

If there’s been a stick to beat Rohit Sharma over the years, it has been his inability to score runs on away pitches. But the Mumbai-raised opener put all his critics to the sword when he went on to smash a staggering 648 runs in the 2019 World Cup that was held in England.

Rohit was unplayable throughout the tournament and he proved to the world that he isn’t just a flat-track bully. But has he been able to replicate the same when it comes to Test cricket? The answer is a resounding no.

Even though Rohit had a few decent outings in the recent series against the Aussies, it just wasn’t enough to prove his worth on away soil.

Virender Sehwag on the other hand has 10 test centuries overseas, including tons in England, Australia, and South Africa. Sehwag has also scored 6 out of his 15 ODI centuries on away soil. It’s simple, Viru really knows how to find a home away from home.

Sehwag has simply always been the go-to man for India away from home and was immensely bankable overseas. We just can’t help but give this section to Sehwag as he is head and shoulders above Rohit in this department.

Why Hitman has always had a bigger burden on his shoulders

Both these players have been crucial for the Indian teams they used to open the innings for, albeit having a different sets of roles and responsibilities.

Sehwag always had the license to go big. Whether it was a World Cup final or a warm-up match before a tournament, Viru’s all-out-attack approach never went missing.

And while he was always an integral part of the side, he wasn’t ever India’s most important player, even in his prime. As incredible as Sehwag was, the responsibility to get the Men in Blue wasn’t usually on his shoulders, considering the legends in the same XI such as Tendulkar, Dravid, and Dhoni.

But the story couldn’t be any more different when considering the case of Rohit Sharma. Hitman is quite easily India’s 2nd most important batsman after Virat Kohli. And on days where King Kohli departs, all eyes are on India’s vice-captain to carry his nation on his back.

Even though Rohit has the tendency to go big, he tends to adapt to the situation and has taken the responsibility to see his side through to victory on several different occasions. His display of patience and leading India from the front against South Africa in the 2019 World Cup when the top order crumbled wasn’t vintage Rohit Sharma; a century defined by resilience and caution where winning somehow was the goal over style.

Sehwag is on a different planet to Rohit in Test cricket

Throughout his career, Sehwag was a vital part of the Indian Test side. And the legendary opener broke records for fun. Apart from having the highest ever Test score and the most number of triple hundreds by an Indian batsman, he also holds the record of the fastest 200 and 250 in the longest format of the game.

Sehwag’s rapid starts were worth their weight in gold as he accelerated with as much venom as he did in white-ball cricket. How can anyone forget the time when he managed to score 284 runs on the first day of a test match against Sri Lanka in 2008?

When Sehwag gets going, the opposition start praying. Viru was an absolute run-machine in Test cricket and as much of a beast as he was in shorter formats. However, the same cannot be said about Rohit Sharma.

The Mumbai Indians skipper hasn’t always been his best self in the unlimited-over format and while some may argue that he’s finding his stride currently as an opener in tests, the comparison with Sehwag is a non-starter.

Sharma has the edge over Sehwag in ODIs

There is no denying the fact that Sehwag is one of the greatest ODI batsmen of our time. His ability to whack top bowlers to all parts and kick the Indian innings off, almost in T20 fashion has been extraordinary from day one. A master of exploiting the powerplay.

But the greatness that Rohit Sharma has achieved in One Dayers eclipses the iconic status of Sehwag’s.

Sharma can match Sehwag in terms of entering kamikaze mode but the number of situations where his maturity in sticky situations aren’t enough to count on two hands. And the stats point to how Hitman is the pinnacle of consistency in ODIs.

While Virender Sehwag amassed 8,273 runs in 251 matches, averaging a solid, if not spectacular 34.03 throughout his career, Rohit Sharma’s 9,207 runs in 24 lesser outings and a splendid average of 48,96 is just an indicator of the latter being the superior batsman in 50 over cricket.

And before we forget, Sharma being a double centurion and that too thrice in ODIs just strengthens his case.

Hitman over Viru in ICC tournaments any day

Both Rohit Sharma and Virender Sehwag have proven themselves to be guaranteed big game players. It has never been a surprise to see why neither of them has had any trouble stepping up in ICC tournaments.

Even though Sehwag went out for a duck in the monumental 2011 World Cup final, he was the perfect aggressor for India in their route to glory throughout the tournament Viru’s finest ICC tournament was the 2002 Champions Trophy where he scored 270 runs at an average of 90.88.

Rohit has a spellbinding 11 centuries in ICC tournaments (including the World Test Championship), more than any other batsman in the world.

Rohit decimated almost every opponent he faced in the 2019 World Cup, where he ended up becoming the first batsman in the tournament’s history to score 5 centuries, in a run where he was merely 25 runs away from Sachin Tendulkar’s all-time record in the history of cricket’s most coveted competition (2003 World Cup).

Rohit Sharma is in a league of his own in ICC tournaments.

Very simply, Sehwag is deservedly considered as one of the greatest batsmen of our time. Rohit Sharma is a man who was touted to fill his boots after the legend called It a day and it would be a crime to say that hasn’t done so convincingly.

Considering all the evidence at hand, we think Hitman edges Viru and has to be considered as the better batsman, overall.

It’s a hot take but in our humble opinion, Rohit Sharma wins the battle.