WHY GAYLE AT NO.3 IS A NO-BRAINER AT THE T20 WORLD CUP 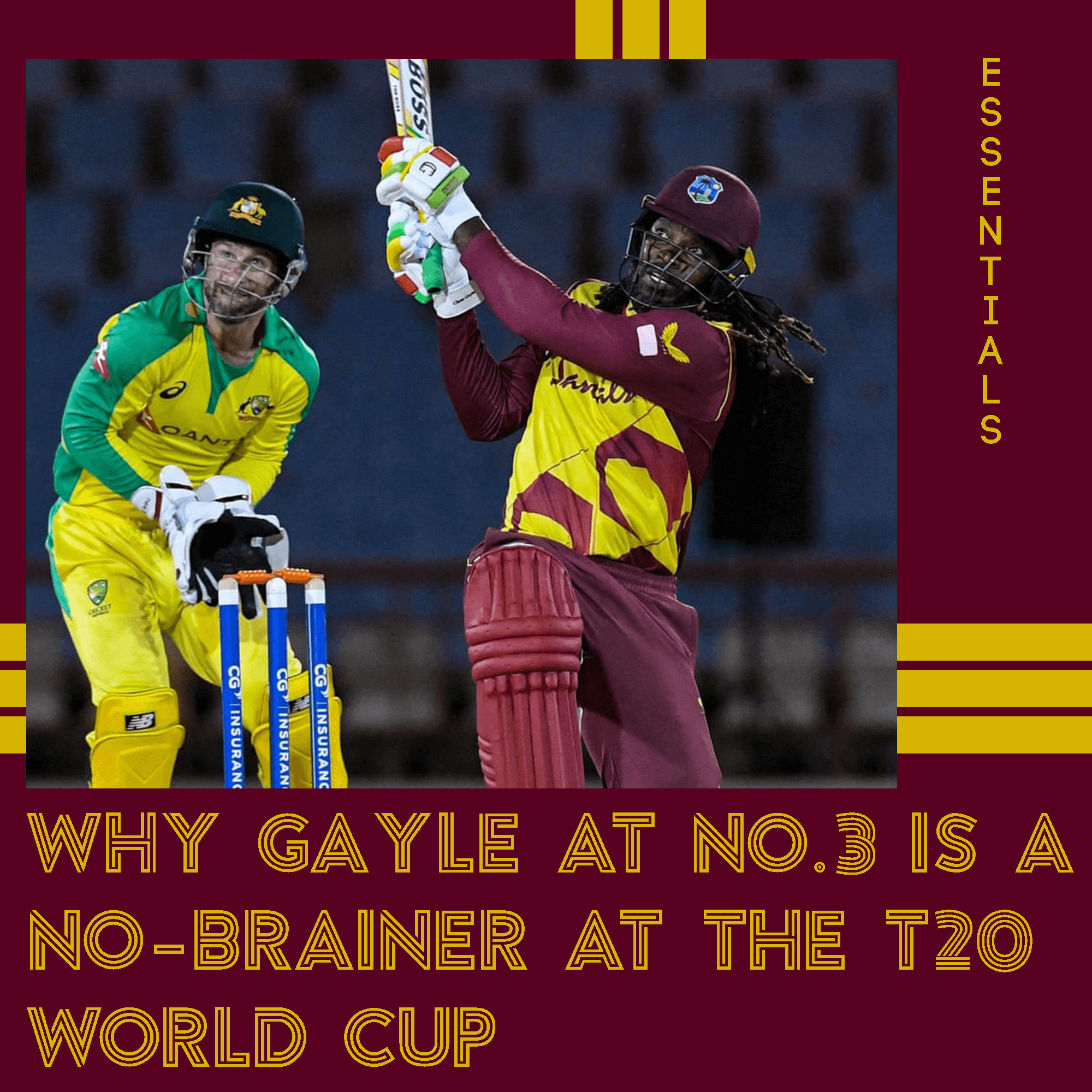 After a two-year gap, Chris Gayle returned to the international stage for the Windies when they took on Sri Lanka earlier in March this year. Ever since, the legendary opener has been on a forgettable, failing to score even 35+ runs in either of the 8 games he played against Sri Lanka and South Africa. However, this week, he reminded us of his explosive nature with a matchwinning 67 off just 38 balls against Australia.

The Gaylestorm had well and truly arrived as the Windies brushed aside the Aussies to round up a 3-0 win in the five-match T20 series.

This half-century marked Gayle’s first 50 in international colours since 2016. Mr.333 scored a blistering 100* against England in the 2016 T20 World Cup and things haven’t gone his way ever since. And that’s clear to see as in his next 17 innings, the former Jamaica Tallawahs talisman has averaged only 14 as well as a dauntless strike rate of 102.

Not very Chris Gayle, is it?

It may be a slight hot take to some or just stating a fact to others but his recent poor patch shouldn’t put his place in the West Indies’ T20 World Cup squad in jeopardy.

Now donning the new role of a No.3 batsman in the West Indies side, the reinvention of the big man himself makes the perfect argument for any sceptics reading.

Gayle as a No.3: A win-win situation for the Windies and the Universe Boss

To say Christopher Henry Gayle is the best T20 opener the world has ever seen is not an outlandish statement. Pure, unadulterated annihilation was on show as even the kings with the ball couldn’t find an answer to the God of devastation.

The RCB icon has always managed to offer blistering starts to any side he has been a part of. Quite simply, he makes use of the powerplay better than any other batsman in the world and can terrorize oppositions from ball one.

However, the Chris Gayle at the upcoming T20 World Cup is a tamed beast.

As a No.3, the towering batter has the license to take his time after just stepping out to the crease. This doesn’t imply that Gayle suddenly turns into Joe Root and takes on the mantel as an anchor but instead, takes his sweet time, gets his eye in and then smacks it to all parts as per standard procedure.

While only in glimpses has Gayle shined in his newfound role at the Punjab Kings, the danger of him finding his feet before finding the boundary rope and beyond for fun can send any opposition into crisis mode.

Scored three fifties in the 2020 edition of the IPL as a No.3, the seasoned vet is no stranger to being at his unstoppable best in the role.

Considering the Universe Boss likes to take his time and can put his incredible experience to the test by laying the blueprint for how to tackle any situation for his partner, it’s a no-brainer for Gayle to be on the flight to UAE.

The one-offs are worth the risk

The man doesn’t believe in half measures. Chris Gayle either goes big or goes home. And despite the fact that the man ages like fine wine, age takes a toll on everyone.

After all, the former West Indies skipper has shown us that even at his age, the big shots will never fade away. While the prospect of a century after going missing exists, clearing the boundary rope even if the scoreboard shows single figures is still the boss of all bosses in a nutshell.

In a clutch situation, Gayle’s one-offs could turn any game on its head and no side in the world can do away with a gamechanger of this magnitude.

And in case, the Gayle experiment doesn’t come off, the current West Indies roster is packed with matchwinners. A side that opens with Evin Lewis and Lendl Simmons, Gayle at No.3, followed by the likes of Shimron Hetmyer, Kieron Pollard, Nicolas Pooran and Andre Russell is supercharged with T20 connoisseurs.

A risk worth the risk.

A gamechanger beyond his greatest hits

“We don’t judge Chris Gayle by his performances now. His presence alone sends fear factor to the opposition and also brings calmness in the dressing room.”

Taking this quote lightly is simply underselling the impact of one of the Carribean’s finest on that West Indies dressing room. Especially e in a major tournament, the power of team harmony is underrated and to have a pioneer of Windies cricket, who’s been there and done it all in 4 different decades is an astonishing asset to have in your arsenal.

Chris Gayle's got some fresh stickers after a short conversation with the ICC! 😅 #WIvAUS pic.twitter.com/99nxhrBrGP

Gamechanger? Check. Experienced? Check. A leader? Check. The complete package? How many times can you check again because one’s not enough