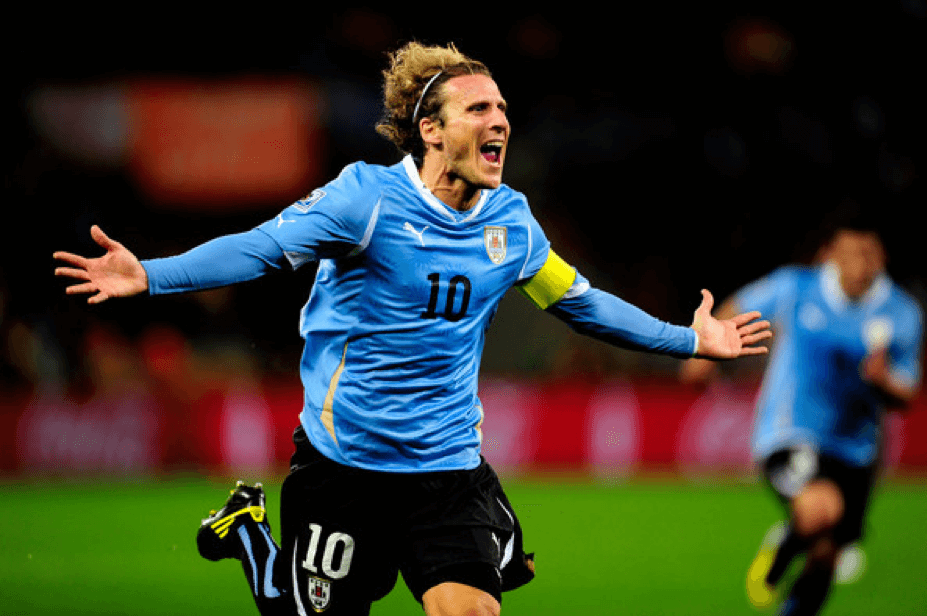 Born in Montevideo, Uruguay, Diego Martin Forlán Corazo was not just a prolific goalscorer, but is considered one of the greatest Uruguayan footballers of all time. Having played for Independiente, Manchester United and Inter Milan, Forlan became a household name when he made the switch from Villarreal to Atletico Madrid in 2007 for reported fee of €21 million.

Diego Forlán arguably enjoyed his best football at the Spanish capital, helping the club gain Champions League qualification in 2008. A hattrick in national colors against Peru in a World Cup qualifying game in June 2008 set the precedent for one of the greatest individual World Cup performances the world had ever witnessed.

Drawn against France, Mexico and hosts South Africa in Group A, Uruguay had a task in hand to qualify for the next round. Playing against France on the opening day of the competition at the Cape Town stadium, Uruguay and Diego Forlán managed to salvage a draw against the 2006 runners up despite Nicolas Lodeiro being sent off in the 81st minute.

On 17th June 2010, Uruguay announced themselves on the biggest stage of football with a 3-0 victory over South Africa. With the score level at 0-0, Uruguay needed something special to break the deadlock. Enter Forlán. Carrying the ball from midfield in the 24th minute, the decorated talisman hit a piledriver of a shot from almost 25 yards, dipping viciously, the untamed Jabulani went over South Africa goalkeeper Itumeleng Khune’s head, hitting the underside of the crossbar on the way in.

On the 76th minute mark, the South African shotstopper was at fault again when he tripped Luis Suárez who had somehow found a way through the African defense line. With the goalkeeper sent off, Forlán dispatched home the ball from 12 yards out to double Uruguay’s lead and seal all 3 points for La Celeste. Alvaro Pereira scored another to make it 3-0 and make it seemingly impossible for South Africa to win in front of their home fans.

Ahead of Mexico on goal difference on the final day of the group stages, group leaders Uruguay needed a point against their fellow South Americans to guarantee qualification into the round of 16.  A first-half goal by Luis Suarez was enough for Uruguay to qualify as group winners. Forlán was again the focal point of all the Uruguayan attacks. Following the match, he said that Uruguay was getting more and more confident, that they have a very good team and they know what they are capable of achieving. A bullish Forlán is one never to be messed with.

Facing South Korea in the round of 16 tie at the Nelson Mandela Bay Stadium, Uruguay tipped South Korea, thanks to a neat double from Luis Suárez. Diego Forlán, enjoying his best football in the African subcontinent was again in the limelight when his low cross was rather misjudged by the then Korean No. 1, Jung Sung-ryong. Suárez lurking around in the far post punished the Koreans with what would be his easiest goal of the campaign, a tap-in to give the Uruguayans the lead in the 8th minute. A mistake in the 68th minute, this time by the Uruguay’s man between the sticks, Fernando Muslera left him stranded after a failed attempt to gather the ball off a Korean freekick. Lee Chung-yong headed in from close quarters to get the score level at 1-1. A curling effort by Suarez assured a quarterfinal clash against Ghana.

Uruguay vs Ghana, World Cup 2010 quarterfinal. Two absolute bangers and drama. In the 45th minute, Ghana found themselves ahead in the fixture when Sulley Muntari scored a screamer to beat Muslera from almost 30 yards. But the lead was short-lived. In the crucial moments of the match, when Uruguay needed something special to save the tie, Forlán stepped up yet again to score a beautiful curling freekick to beat the Ghanaian goalkeeper from the edge of the box. There are days when football can be cruel and this was surely one of those days.

Luis Suárez was sent off in the 120th minute of the game for punching Dominic Adiyiah’s header off the line., Asamoah Gyan’s resultant penalty hit the woodwork as Ghana’s talisman could only hold his head in his hands in disbelief. These iconic images will never escape the memory of any football fan that was struck by a similar sense of disbelief during one of the craziest 90 minutes in the elusive tournament’s history.

In the penalty shootout afterwards, Uruguay’s go-to man for the World Cup campaign, Diego Forlan took it on himself to dispatch home Uruguay’s opening kick to give the blues a 1-0 lead over the Black Stars. Uruguay went on to win the match 4-2 on penalties to book a semi-final clash against Holland in the Cape Town Stadium on 6th July 2010.

Playing against the Netherlands in a World Cup semi-final was never going to be an easy task for Les Celeste. Uruguay went down against the Oranje when Giovanni van Bronckhorst’s blinder found the back of the net in the 18th minute. Uruguay managed to cut down the deficit with an absolute belter when Forlán’s left-footed long-range missile nearly tore Maarten Stekelenburg’s net. Forlán was only dealing in screamers and his sensational performances warranted a Golden ball in the least.

Uruguay’s amazing run in the World Cup was cut short by Dutch veterans Wesley Sneijder and Arjen Robben when either of them scored in a gap of 3 minutes to put the fixture and Uruguay’s dream of winning the World Cup to rest.

In the third-place play-off match against Germany, Forlan managed to score yet another beauty when his volley off Edigio Arevalo’s cross beat Hans-Jorg Butt to give Uruguay the lead against Die Mannschaft. Germany went on to win the game 3-2.

Oscar Tabarez’s Uruguay exceeded all expectations to reach the semi-final of football’s most elite competition and one of the bigger reasons behind their success was Diego Forlán- his goals, intricate passing, finding little pockets of spaces, making space available for the likes of Luis Suárez when there was none to begin with, duels and the appetite for winning which ultimately made the difference.

For his efforts and the beautiful football throughout the competition, the Uruguayan was awarded the Golden Ball; ahead of the likes of Wesley Sneijder, a World Cup runner-up and David Villa, a World Cup winner. Forlan, with 5 goals was also the joint top-scorer in the campaign alongside the likes of Thomas Mueller from Germany, Villa from Spain and Sneijder from Holland. He was also picked for the team of the tournament.

While a young Thomas Mueller burst onto the scene in fine fashion and Iker Casillas was at his composed best throughout the tournament, Diego Forlán was streets ahead of everyone

It’s fair to say that Forlan’s World Cup 2010 campaign is considered to be one of the best individual performances in the history of football’s crème-de-la-crème competition. Forlan is dubbed as “the only man to have tamed the Jabulani.” He announced his retirement from professional football in August 2019.

Forlán’s mastery at the 2010 World remain unforgettable to this day.