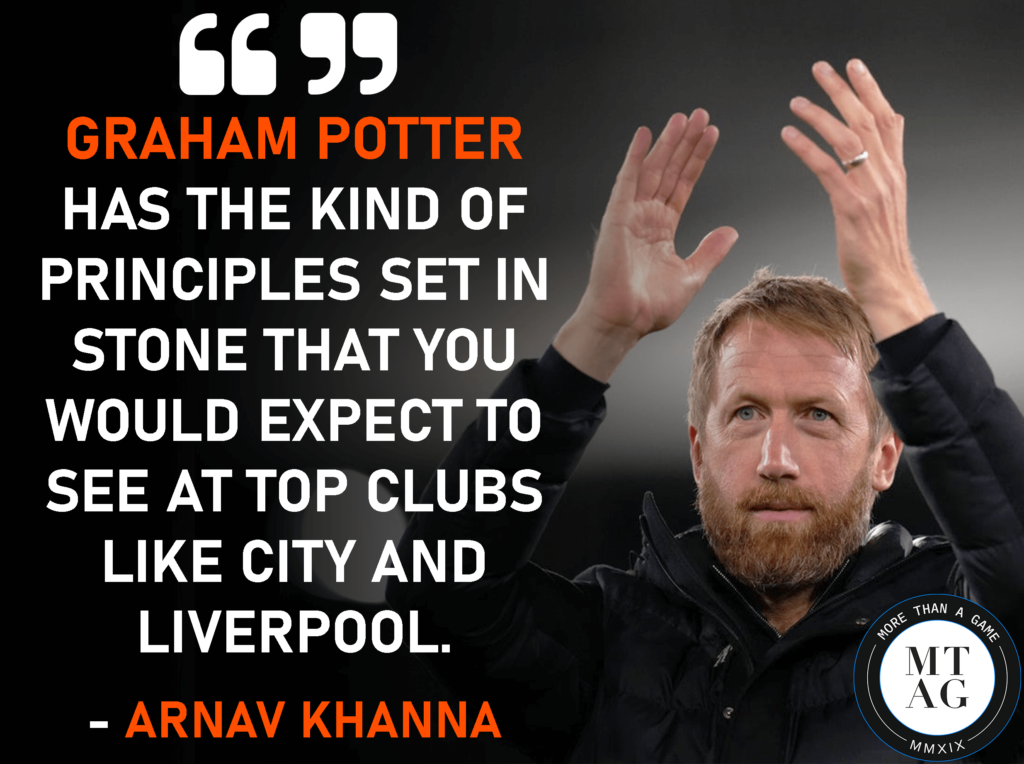 Saturday, 2nd October. Brighton vs Arsenal. Aaron Ramsdale takes his sweet time on the ball in extra time, content with the score being 0-0. The Gunners have been whitewashed in every department by the Seagulls over these 90 minutes. A bearded Graham Potter stands in the blue dugout. And you can’t help but wonder what he could offer if he stood in the red one…

When one pans their vision around the managerial horizon, you soon come to the realization that managers with ability, potential and availability are in extremely short supply. The rising names such as Julian Nagelsmann and Steven Gerrard are snug fits for their current clubs and the ones out of a job and ready to roll are well, out of a job for a reason.

The 46 year-old has been hailed as the best English manager by Pep Guardiola; not too shabby a source for a co-sign. Ever since taking over Brighton’s helm, the Englishman has been passing both, the eye and the stats test.

With Tottenham, Arsenal and Manchester United all lurking in the shadows for a managerial overhaul, we theorize how Graham Potter could step up to the mantle.

The word you’re looking for is ‘scalability’

Our castles are not completely in the air here. Graham Potter has developed a very modern and progressive brand of football that is extremely scalable to top clubs.

Adept with sending out his side in a myriad of shapes, from a flat 3-4-3, to a narrow 4-2-2-2 as well as several variants of a 3-5-2- the Brighton gaffer has the kind of principles set in stone that you would expect to see at top clubs such as Manchester City and Liverpool.

Building from the back, creating overloads to beat the opposition press, pressing from the front, counter-pressing or forming triangles in their patterns of play. Potter’s bag of tricks looks like a checklist one ticks when looking for a top manager in 2021.

Look, the former Östersunds boss hasn’t reinvented the wheel are. These principles should be considered as fundamental pillars of any footballing side.

But choosing to coach these “basics” for the lack of a better word instead of opting for a manager considers “result-oriented” approach ultimately leads to a drab, short-term philosophy that is headed nowhere.

Going long to the strikers is as much an option as intricate passing and patient build-up play.

When you sum all of this up, you have a team that can leverage various vectors to break oppositions down – a must-have frankly speaking, if the club wants to set its footballing identity in stone.

A mere mention of Arsenal under Arsene Wenger and you already have flashes of Bergkamp and Henry playing a brand of football silkier than hotel bedsheets.

And speaking of Arsenal, we have no choice but to give Tottenham a mention.

Nuno Espirito Santo came to North London London with conceding possession and hitting teams on the break as his blueprint. But at Spurs, his men look lost on the pitch because they’re used to a ball dominant, high-pressing system as under Pochettino.

It’s as if the opposition giving respect to his team is something the Portuguese manager has neither experienced nor prepared for – a lack of scalability. 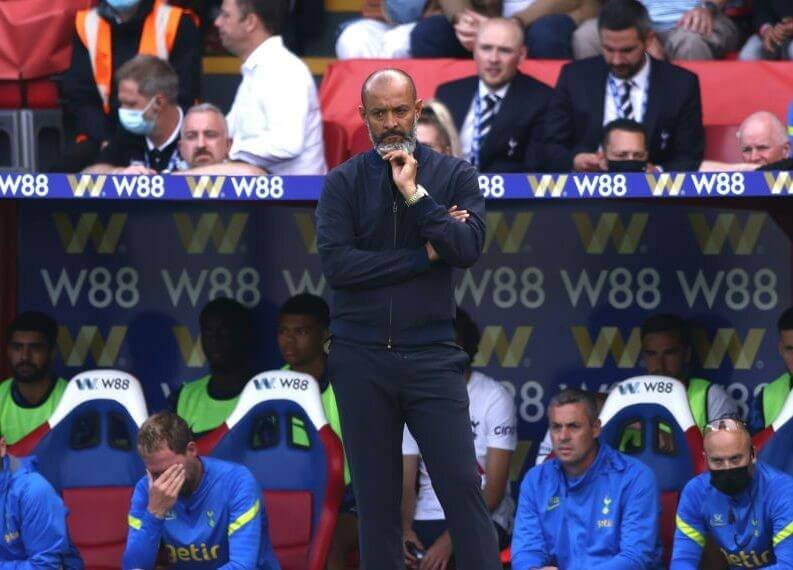 Potter’s intent and intensity would fit right in with the ethos and environment at a top club. He who is already outgrowing his boots, would not mind a bigger pair.

Adapt or be extinct, courtesy of Graham Potter

Graham Potter’s ability to stare adversity in the face and continue without a hitch is as commendable as it is surprising. Shoestring budget, long-term injuries, player exits, underperforming forwards, the bearded one takes it all on the chin.

Tariq Lamptey was set to take the league by storm, especially last season but fell to a long-term injury after starting just 10 league games. Joel Veltman was wheeled in, the blow was softened.

And on the other end of the pitch, a giant of a man in Dan Burn was commissioned as left wing-back when times got desperate. A feat as baffling as it is impressive.

Shane Duffy endured a horror spell at Celtic, yet was able to smoothly fill the gap left with the departure of Year, Ben White, Brighton’s 2021/21 Player of The Season.

Neal Maupay huffed and puffed his way to an unimpressive 8 goals in 2020/21 while collecting an xG of 13.77. Unfortunately for the Frenchman, last campaign will certainly be used an example to explain the phrase, “underperforming your xG”.

Despite everything, Brighton ended Potter’s 2nd season in charge with an expected points of 5th in the 2020/21 Premier League table.

Yet, survival was the goal and while the lack of a clinical No.9 is symptomatic of why most relegated sides cannot survive the drop, 16th place was secured, without no excuses put in place.

This year, with Maupay coming into his own, Brighton sit at 6th place, proving the theory that if the outfit from the South Coast had a clinical No.9, they’d be on different planet to the bottom-feeders.

And on days when they lack the ruthlessness in front of goal, for instance against the Gunners at the Amex on Saturday, the style of play remains intact- despite missing the likes of Danny Welbeck, Adam Webster and Steven Alzate through injury.

On the other hand, a certain Mikel Arteta finds his team crumbling like dominoes on a pitch with injuries to a key player or two. The fact that the Arsenal midfield looked like a shadow of its glorious self against Spurs due to an injured Granit Xhaka tells you all you need to know.

Graham Potter? He picks up the rocks thrown his way and polishes them until they turn to emeralds. 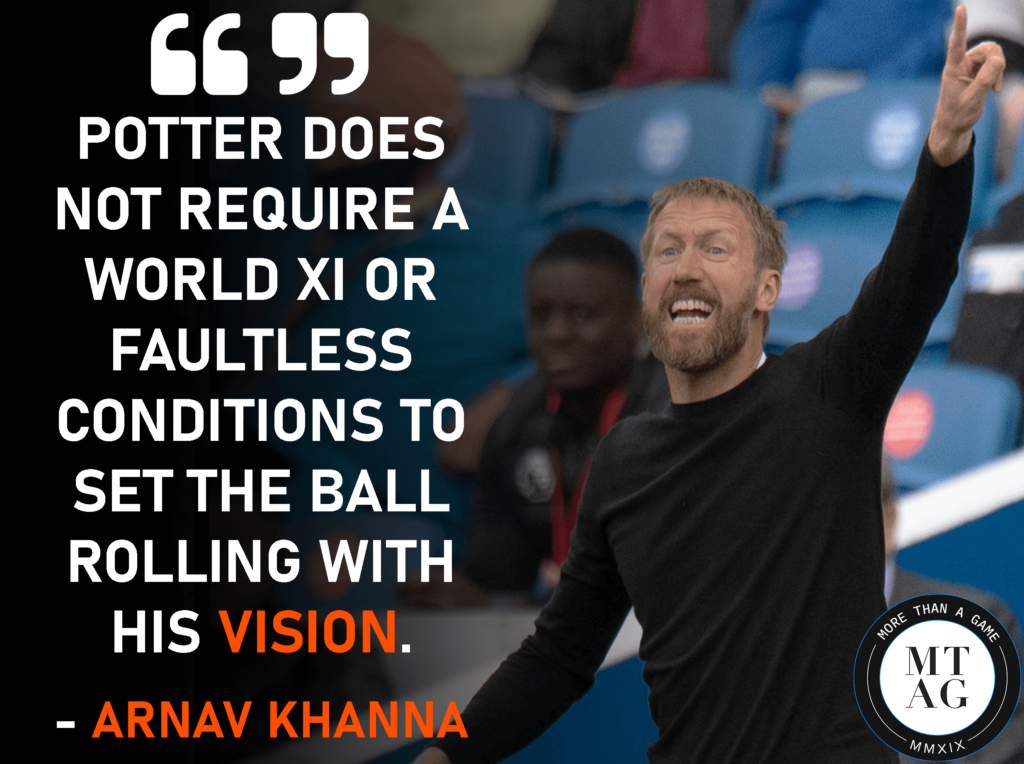 The point is that the Brighton boss does not require a world XI or faultless conditions to set the ball rolling with his vision. His principles and his coaching are sound enough to extract every ounce of football out of players that others would turn their noses up at.

It is no coincidence that a bumbling Shane Duffy found his feet in that Brighton back three or the serial squanderer in Maupay is now overperforming his xG by 2.5 this season.

Before we pull the curtains down…

Of course, Graham Potter is not infallible. There is no track record of him handling the expectations and personalities that come with a top club.

His degree in social science and masters in leadership and emotional intelligence would have to be revisited regularly as he tries to piece together himself and his philosophy in a new environment under constant scrutiny.

But if there is someone out there who deserves to have the dice rolled on him, it is Mr. Potter himself.

Save the Harry Potter jokes for next time and appreciate the beautiful game’s beautiful mind. 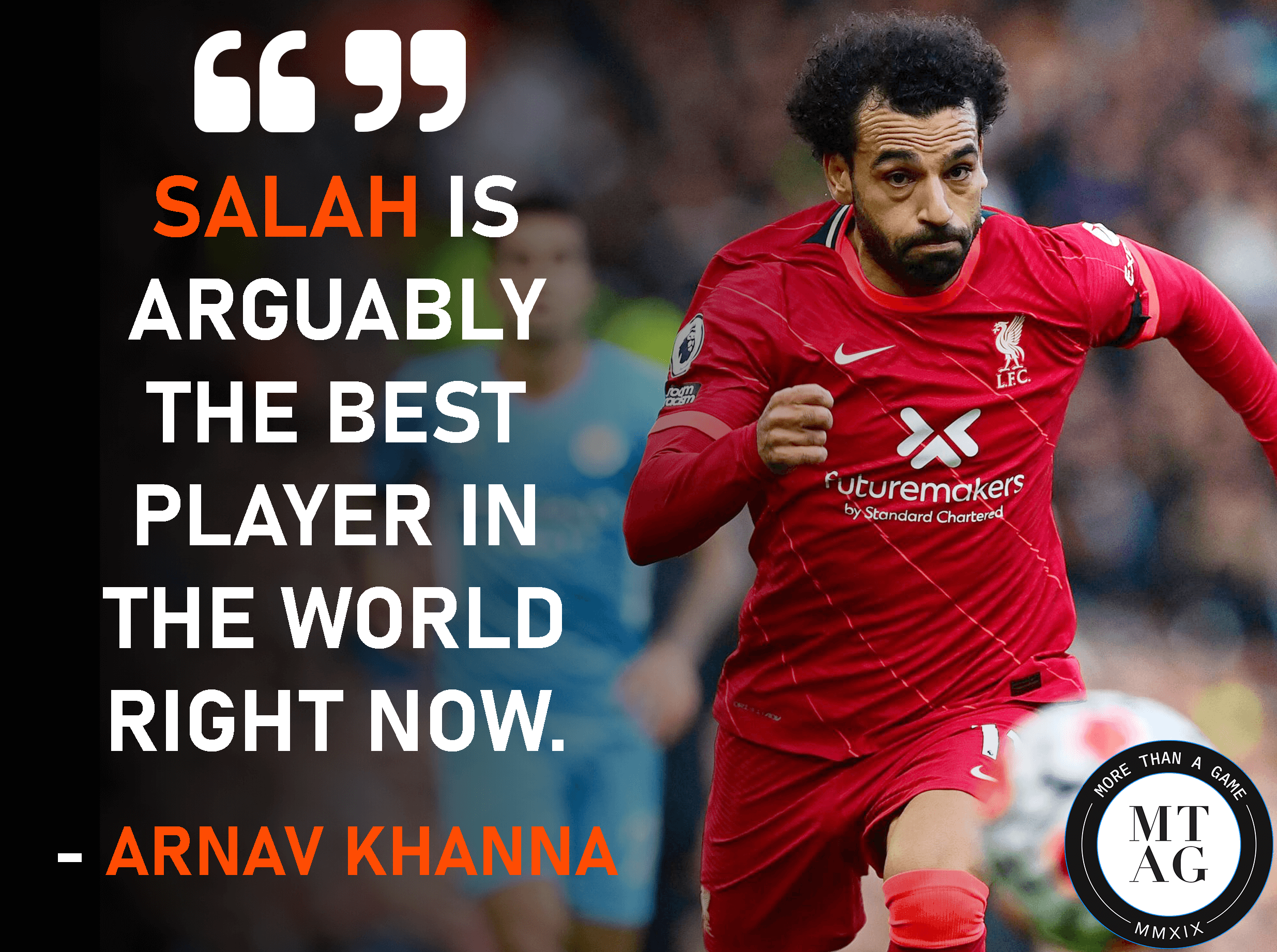 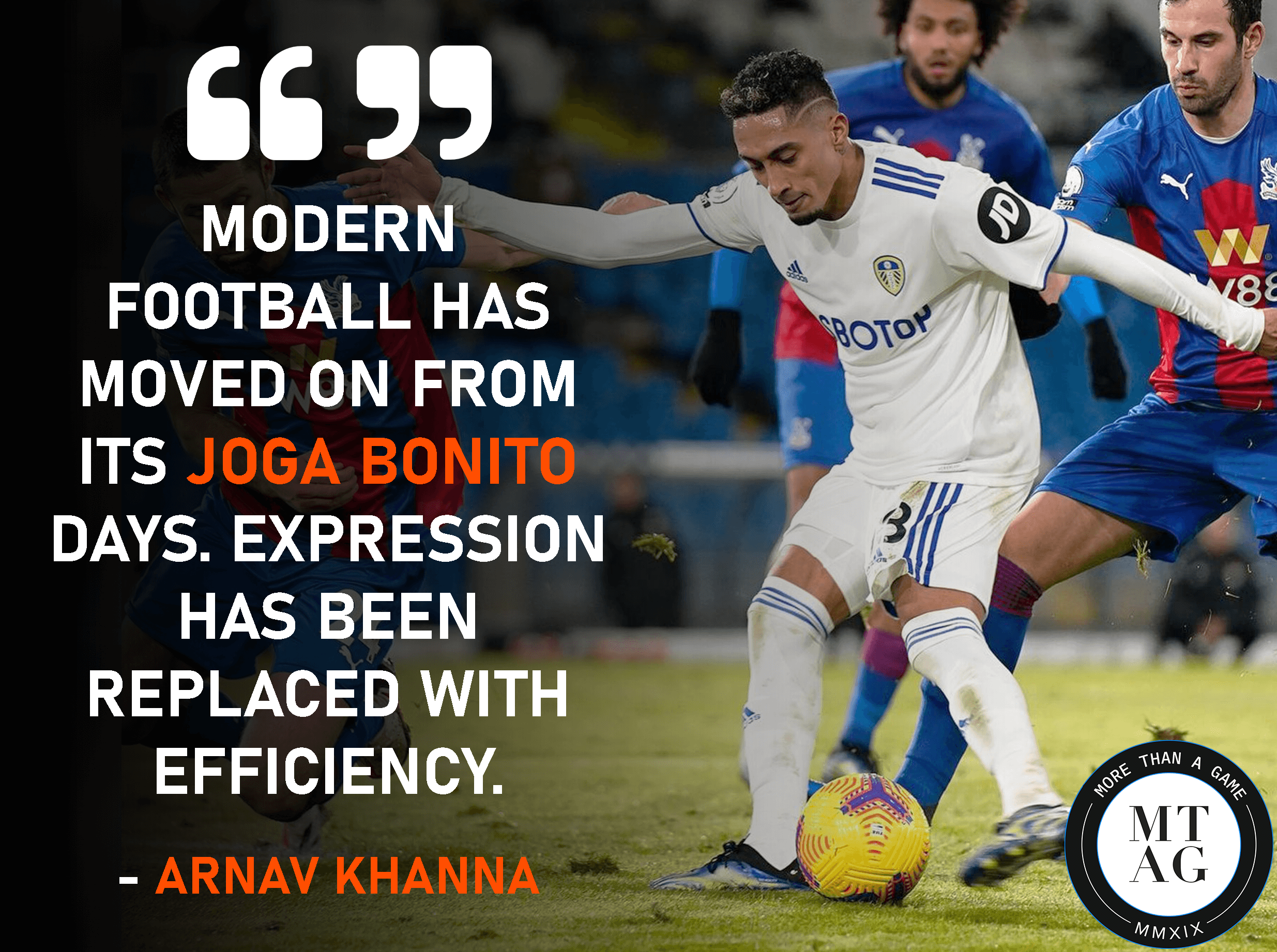 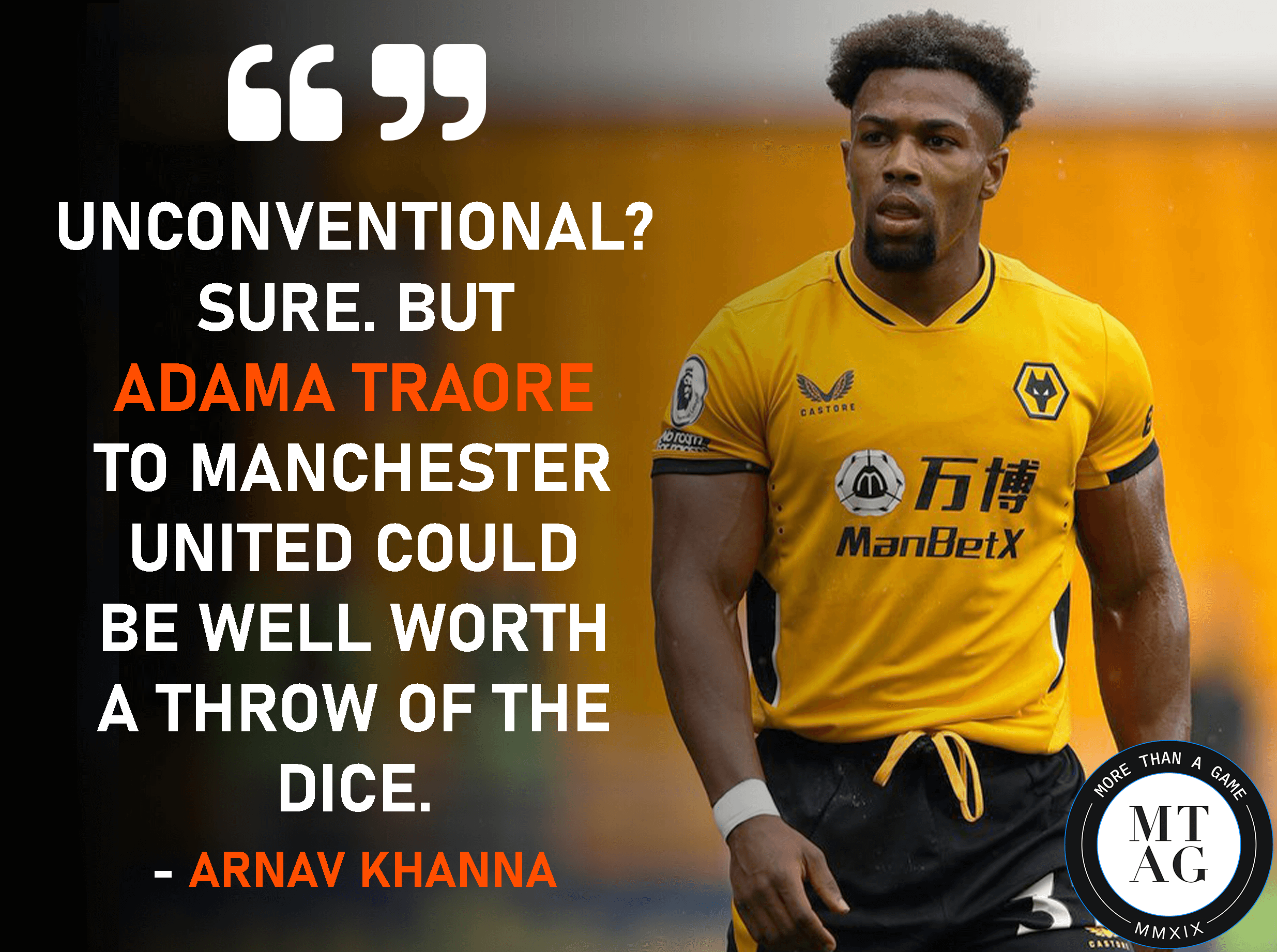