Manchester United hosted Arsenal in what used to be a great rivalry for the Premier League title and now how the mighty have fallen as it has become a playoff for the 4th spot to maintain their status as clubs with European football. It was a story of so near yet so far for United who dominated most of the match but yet again had barely anything to show for it. Scott McTominay scored a world-class goal and then United allowed Arsenal to get back into the game. Arsenal for their part were profligate in their defense and the decision by Emery to not play Kieran Tierney and Rob Holding was baffling to most. His exclusion of Dani Ceballos in an immensely conservative midfield trio of Granit Xhaka, Lucas Torreira and Matteo Guendouzi.

Pierre Emerick-Aubameyang scored because of a lapse in the United defense when an out-of-position Axel Tuanzebe was caught out in trying to play him offside. While the goal was initially ruled out, VAR reversed the decision and the scores were levelled. The match ended in a draw with both teams hoping for a better outcome and yet deserving nothing but a share of the spoils.

Last night showed that both Manchester United and Arsenal are simply extremely average, with a propensity to make errors and continue breaking millions of hearts all around the world. There probably were better things to do with a Monday night and yet the match showcased that both the clubs have a long way to go to even consider challenging Liverpool and Manchester City for the top honours in English football. The defending was almost a novelty and the attack for both teams was toothless. Improvements must be in order.

Paul Pogba continues to remain the greatest mystery in sport; the talent and skill he has is beyond doubt but the application leaves one pulling their hair out. The missed passes, unnecessary long shots and at times cavalier approach is as frustrating as anything can be on a football pitch and his tendency of losing possession was on full show in the match. The very fact that you would struggle to find people who talk positively about the man who was a leader for France during their World Cup victory says it all. It has been said umpteen number of times, but he truly does need to step up and the hope that he does is eternal, well for United fans at least.

Nicolas Pepe for his 75 minutes on the pitch at Old Trafford was almost non-existent in the game. He had a few promising touches but once again failed to deliver on the immense promise he showed in Ligue 1 last season. There were the usual misplaced passes, incomplete dribbles and the wayward shots on goal, it is imperative for Emery and his coaching staff to sit down with the young Ivorian and get him to settle down into life at Arsenal as the pressure of his huge price tag is only going to increase as time goes on.

The Red Devils have a real problem when it comes to their attack as without Martial, it lacks real bite. The number of chances missed by the likes of Marcus Rashford was astonishing and he clearly isn’t the answer to United’s striking woes. How he scuffed a one-on-one chance in the first-half before allowing Sokratis to arrive onto the scene was baffling to say the least.

Yet it doesn’t seem like Ole Gunnar Solksjaer has any other options. Mason Greenwood has been a shining light for United but how many 17-year-olds have ever bailed their clubs out of trouble regularly? It’s a dilemma that must be on the gaffer’s mind.

Guendouzi and McTominay: The Future 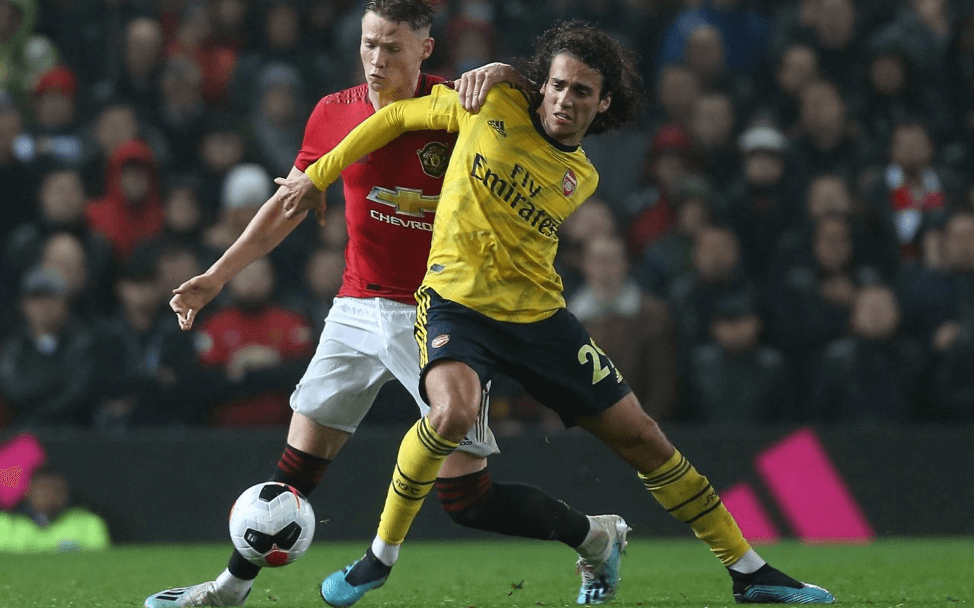 Matteo Guendouzi and Scott McTominay proved last night that there may perhaps be some light at the end of the tunnel for both these beleaguered clubs. They both bossed the midfields with much more experienced individuals around them; namely Xhaka and Pogba. What was even more inspiring for the optimistic fan was their ability to not get over-awed by the situation and to be extremely tidy with the possession. McTominay’s scorcher of a strike was the icing on the cake for the young midfielder. There definitely is a sense of optimism with both these players with Guendouzi probably having a higher ceiling than the United man.

Pierre-Emerick Aubameyang guarantees you one thing and that is goals. His talent to sniff out chances and then take them unerringly is almost predictable as he shoots and scores as if it’s a habit. The Gabonese frontman is possibly the best signing Arsenal have made in the past 10 years and his consistency in front of goal is genuinely breathtaking. He has single-handedly carried the Gunners over the past two seasons and by the looks of it, he looks set to do so for more years to come. Arsenal finally seem to have replaced their legendary number 14 with the Atomic PEA.

With 17 goals in his last 17 appearances for the North Londoners, he does not look like he’s stopping anytime soon.