THE PREMIER LEAGUE TEAM OF THE DECADE

As the 2010s come to an end, we at More Than A Game try to fit a best 11 of footballers to have graced the pinnacle of English football in the decade into a single team. From the silky superstars to the no-nonsense mainstays, here are the ones that made it to our Premier League Team of the Decade.

Already regarded as one of the greatest goalkeepers to have played for United and for his consistent performances over the years, de Gea’s inclusion was a no-brainer.

Having spent 9 years with the Sky-Blues, the Argentine went on to win 2 Premier League titles with the club. Ever-so-dependable starting as a right-back, Zabaleta has been one of the most athletically gifted players to have graced the Premier League. Dropping below 30 appearances only once in his tenure with City, he managed to play only 22 games in the 2015-16 season amid injury concerns.

Apart from his outrageous levels of fitness, ‘Zaba’ was an absolute fighter and the Manchester City faithful would attest to this, seeing their Argentine warrior go head first into challenges and emerge with a bandaged forehead. He certainly took the club’s slogan of having ‘pride in battle’ to heart and was voted the club’s Player of the Year in the 2012-13 campaign.

At 34 and still dependable on the flanks, Zabaleta managed to make his way into West Ham United’s starting XI with 26 appearances for the club from East-London last season. Still going strong.

Arguably one of the greatest centre-backs to have ever graced the league, ‘Vinny’ has been one of the most influential players for Manchester City in the 2010s. Having won 4 league titles under 3 different managers, Kompany was beloved by the Manchester City faithful.

The one-time winner of the Premier League Player of the Season award, Kompany all but sealed the title last season for the Citizens with a blinding strike against the 2015-16 champions, Leicester City.

Captain, Leader, Legend; John Terry is Chelsea’s most successful captain and player. He was a rock at the back for the club from West London for the better half of the decade. A crucial member of the 2014-15 Premier League title-winning season, he also holds the record for being the highest-scoring defender in Premier League’s history.

Terry finished the decade with 3 Premier League title and a PFA Team of the Year place to his name. The Englishman is also one of the few players to have played every minute of the 2014-15 title-winning season. They just don’t make them like him anymore.

Chelsea’s Mr. Consistent, César Azpilicueta is one of the few players who can assure you that he plays for the badge on the front and not the name on the back.

Having played as a right-back under Jose Mourinho, a left-back as well as a right-sided central defender under former manager Antonio Conte, Azpilicueta makes it into our list for his consistency as well as for his versatility.

Considered one of the best signings of the decade by many, Leicester City found themselves a gem when they paid €5 million to Caen in the summer of 2015. The result? Kanté was possible the most important member of Leicester’s shock Premier League title win the following season. If that wasn’t enough, he proved his mettle yet again when he won the title with Chelsea a year later.

Considered as one of the best central midfielders of the modern era, Yaya Touré was instrumental in the two title-winning seasons for Manchester City under managers Roberto Mancini and Manuel Pellegrini before going on to win a third title under manager Pep Guardiola, albeit playing a reduced role under Pep Guardiola.

His 20 goals during the 2013-14 Premier League campaign is a season that most midfielders could only dream of achieving. Voted twice into the PFA Premier League Team of the Year, Touré was also named City’s Player of the Year in 2014.

Yaya holds a dear place in the hearts of the Citizens for his clutch goals that will be etched in history, from his winners against United and ultimately Stoke City that decided City’s first major trophy after 35 years to his brilliant brace against Newcastle United that kept City in their first title race as well as his absolute screamer against Sunderland in the 2015 League Cup final.

For his bullish behavior and sheer presence in the center of the pitch, he gets the nod ahead of Nemanja Matic and Fernandinho in the midfield holding position. But mostly for those unstoppable strides from midfield and a right-foot designed like a sniper; to shoot perfectly from distance.

It’s fair to say that Manchester City’s David Silva has completed English football. Considered one of the greatest talents to have played in the Premier League, Silva played a key role in 4 title-winning seasons for the Sky Blues. He was the anchor around which Manchester City kickstarted their English domination at the start of the decade.

Applauded by pundits, players and managers all over the world for his creativity, adaptability, innovation and consistency, David Silva is certainly not a surprise pick in this list.

With 4 Premier League titles and featuring twice in the PFA Premier League Team of the Season, David Silva’s career at the Etihad is one that is staggering for reasons way beyond just numbers. A true genius that would take your breath on the pitch and steal your heart off it with his humility and down-to-earth persona.

One of the most improved players under manager Pep Guardiola, Manchester City’s Raheem Sterling is a force to be reckoned with. A regular starter for City, he seems like the first name on the team sheet for one of the greatest managers the game has ever seen. Sterling is arguably one of the most clinical forwards in the Premier League. Still only 25, far from being a finished product and with a rate of improvement as tremendous as his, the England international is well on his way to becoming one of the most lethal wingers to have ever graced the Premier League.

Having spent 7 years in the blue half of Chelsea, Eden Hazard is a name that used to send shivers down the spines of young as well as experienced fullbacks. One of the most individually talented and skillful footballers to have graced the league, the mercurial winger won the Premier League title twice; once under manager Jose Mourinho and the other under Antonio Conte.

The Belgian is regarded as one of the best players to have played for Chelsea. In 2015, Hazard completed a stellar season when he was voted both the PFA Players’ Player of the Year as well as Premier League Player of the Season. He departed for Real Madrid in the summer of 2019.

In terms of just ability, Hazard transcends decades and can go neck-and-neck with the very elite of this league’s footballers. 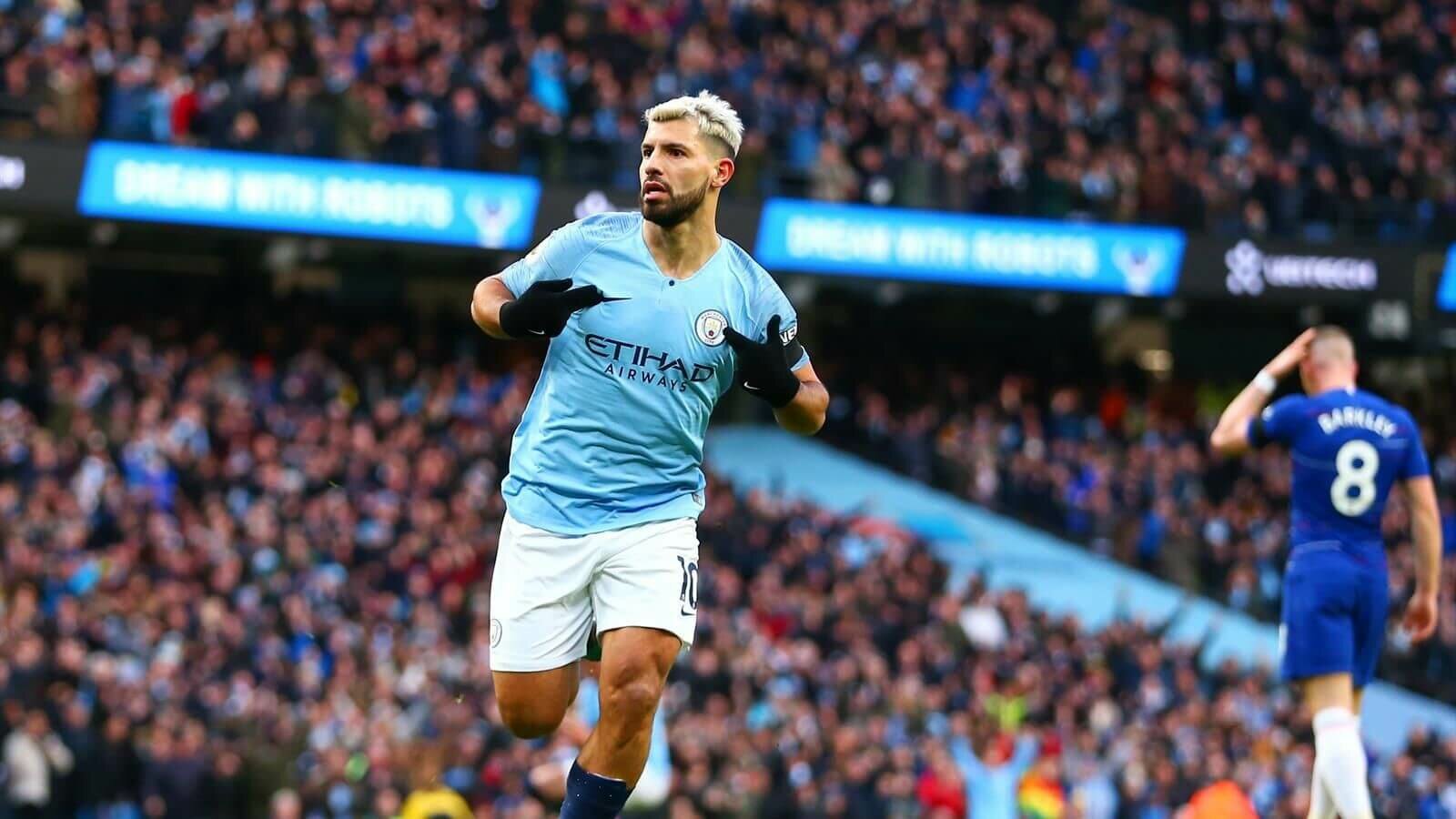 Heralded as one of the most lethal strikers of his generation, Agüero’s goal against Queens Park Rangers on the final day of the 2011-12 season is undoubtedly the greatest moment in the Premier League and would go on to secure an unforgettable title triumph after 44 years for the Sky Blues. One of the most consistent strikers in the Premier League, he has managed a return of 20+ goals in 6 of the 8 full seasons he has been with the Sky-Blues.

With 173 league goals, he sits 6th on the Premier League’s all-time goal-scoring charts, just 2 behind the legendary Thierry Henry and 4 behind Chelsea’s current manager Frank Lampard.

Under Pep Guardiola, Aguero has transformed his game and will be etched forever in not just the club, but the league’s history books.

While his spell at Arsenal was not particularly his fondest, it has to be said that the former Czech Republic international was always solid, if not spectacular and bowed out while remaining a class shotstopper, even if he could not match his unassailable standards.

The veteran fullback from Merseyside, Leighton Baines has been with the Toffees for an astounding 13 seasons. The stalwart fullback is Everton’s leading goal-scorer from the penalty spot and always had the eye to go forward and put in whipping crosses.

Cesc Fàbregas was the key in Chelsea’s 2014-15 title-winning season with 18 assists and 3 goals. Controlling the tempo of the entire game from the middle of the park, the Spanish magician is widely considered as one of the best midfielders in the Premier League era as the World Cup winner constantly made fans drool and oppositions sweat.

Arguably Spurs’ most iconic player in the past decade, Gareth Bale took the league by storm when he managed an impressive 21 goal return during the 2012-13 season. He was voted the PFA Players’ Player of the Year twice and was also voted the Premier League Player of the Season once during his tenure at the White Hart Lane.

If the Uruguayan had decided not to depart English shores, not many would be surprised to see him make this team as he was genuinely devasting on his day. And he had a lot of those days.