THE SERIE A TEAM OF THE DECADE

After slaying the Catalonian giants and conquering the famous treble at the doors of this decade, the world expected a mighty show from the Italian league to continue in the time to come. But Italian football’s crowning competition has since become mired by Juventus’ monopoly over the last 8 Scudetti. Now, with Antonio Conte making a comeback in the Serie A in the Inter colours, Atalanta making their feet do all the talking in their quest for top 4 and a certain someone by the name of Cristiano Ronaldo entering the Italian waters, there’s a feeling that Serie A is beginning to return to its former glory days.

With 2020 fast approaching, we at More Than A Game decided to pick out the best players to have graced Italy’s top flight.

With 7 Scudetti in the last decade alone, Buffon’s place as man in between the sticks was a no-brainer. Gianluigi Buffon is the best in his position the Italian game has ever witnessed, consistently locking himself in the top 3 goalkeeper debate in the past 10 years. With 5 Serie A team of the year appearances and a player of the season award in 2017, aged 39, Buffon swans into the team as one of the greatest goalkeepers in history.

Apart from being the excellent shot stopper he is, Buffon has been a leader of men as well as one of the most respected men in world football. Despite the extraordinary run of form from both Samir Handanovic and Wojciech Szczesny, Buffon makes the number 1 shirt his own.

Italy being the hub of the most sought-after defenders in world football has surprisingly been short of world-class fullbacks over the decade with Christian Maggio being an obvious exception. A brilliant decade with Napoli seals his spot in this elite XI.

Maggio was selected in the Serie A Team of the Year for the first 3 seasons of the decade; won the Coppa Italia twice in 3 years and bagged the 2014 Supercoppa Italiana to boot.

Keeping aside his disastrous spell with AC Milan, Leonardo Bonucci has shown no chinks in his armour in front of Buffon in the famed BBC. With his scintillating range of passing, incredible reading of the game and exceptional heading abilities, the Azzurri vice-captain edges past his ex-teammate Andrea Barzagli into the XI.

Bonucci has regularly been a shoe-in among the top defenders in the world and confirmed his elite status with a place in the 2017 FIFA FIFPro World XI.

Overall, he has been a part of seven Scudetto-winning sides, and was even crowned Serie A Player of the Year in 2016.

Giorgio Chiellini has been faultless; the best defender to play in Italy during this decade and can arguably stake a claim among the top 5 in the famed list of best Italian defenders. The ideal mix of brains and brawn, Chiellini has always been a gentleman off the field but a beast on it.

The 35-year old has been the unchallenged leader of Juventus backline among talents that will stand the test of time. Terrorising attackers with his unequalled abilities on the pitch with his aerial prowess, instinctive tackling and awareness on the pitch makes him an impenetrable object that thwarts the unstoppable forces up top. Chiellini was a key man in every single one of the Bianconeri’s 8consecutive Scudetti triumphs as underlined by his inclusion in the Serie A Team of the Year on four occasions (2013, 2015, 2016, 2018).

A traditional Centre back, and rather an excellent one, we had to move him out wide to fit the Napoli man in the squad. Sure, Alex Sandro and Patrice Evra are top contenders, but no man has impressed and improved on his game more than Koulibaly since joining the league.

The Senegalese international has been the defensive rock for Napoli under both Maurizio Sarri and Carlo Ancelotti, coming up with the goods time and again. Since joining for the Blues in 2014, Koulibaly has featured 168 times and is the first name on the team sheet without a question. He has been part of the Serie A team of the Year for 4 consecutive seasons since 2015-16, not a minor achievement considering the nonpareil class of defenders practicing their trade in Italy’s premier club competition. Owing to his remarkably astute defending, Koulibaly man took home the award for Serie A’s best defender in 2019.

On the field, there have been few – if any more dynamic midfielders in the world over the past 10 years. One of the most versatile midfielders of the modern era, a player that somehow always has extra fuel in his tank, Nainggolan has been a great servant to the Italian game across spells with Roma being home to the peak of his powers.

Aided by his fantastic footballing brain and an absolute weapon for a right-foot, Nainggolan was a mainstay in the Serie A team of the season for 4 years running since 2015, outdoing the likes of Clarence Seedorf, Claudio Marchisio and Arturo Vidal who boasted similar modus operandi, underlining his class and consistency.

Starting the decade with the Italian Athlete of the Year award set the tone for another Roman warrior who neutralised some of the world’s best midfielders in almost 300 appearances during the epoch in question.

With 228 league appearances since 2010, De Rossi has loyalty written all over him. The striker-turned midfield dynamo’s longevity was down to his unrivalled athleticism and consistency.

An understated legend that deserves all the plaudits for truly playing with his heart on his sleeve, Danielle De Rossi was one-of-a-kind. 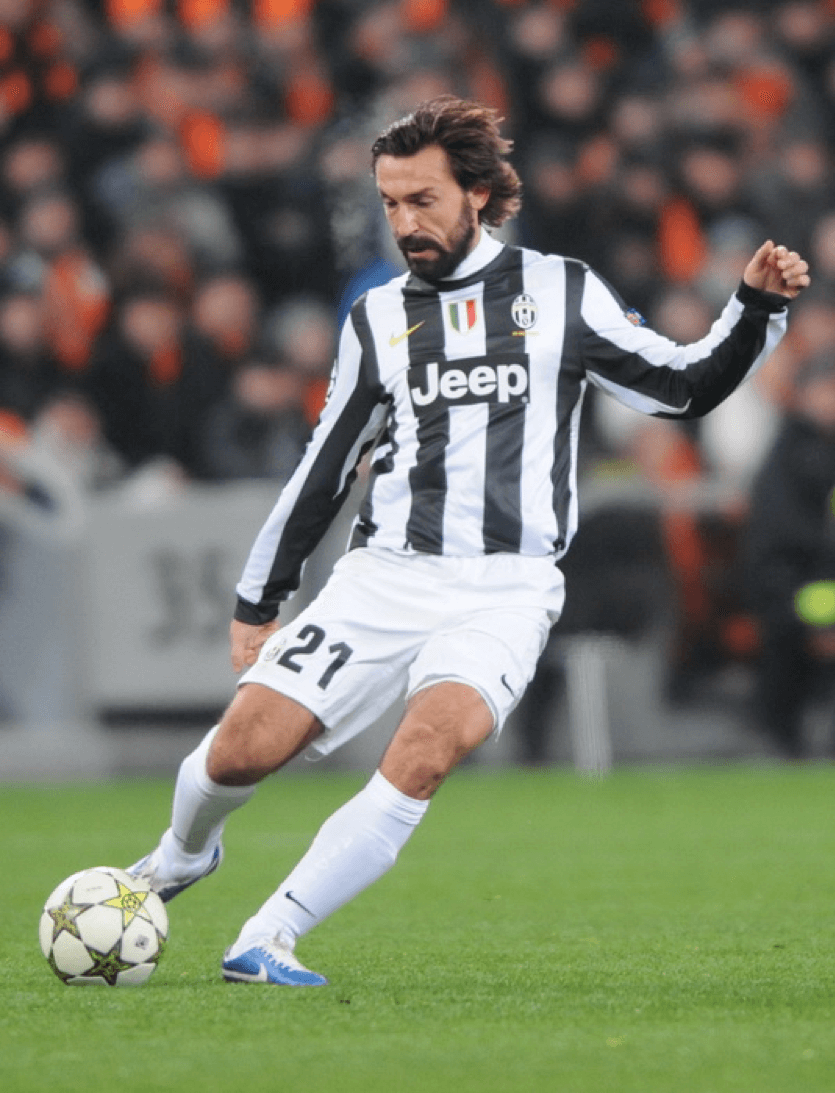 This pick was as easy as Pirlo’s football was on the eye. Andrea Pirlo’s free transfer from AC Milan to Juventus in 2011 changed the entire landscape of Italian football. Right up until his departure from Juventus in 2015, Pirlo was one of the sport’s classiest operators and hoovered up 4 Scudetti with the Vecchia Signora.

While 4 Serie A Team of the Year appearances, three Serie A Footballer of the Year awards and a seventh place finish in the Ballon d’Or represent a rather spectacular decade for the Juventus legend, anyone that has witnessed the Italian in full flow would know that numbers do not do justice to the genius of Pirlo. With the majestic Pirlo pulling strings, Serie A saw the most sustained spell of success in its rich history, ever.

Andrea Pirlo was at the heart of it and is perhaps one of the most globally admired and respected footballers to ever grace the game. And for the all the right reasons.

Il Capitano played his best football before the start of this decade, but credit to his generational footballing talent, Totti walks into this team of thoroughbred superstars.

The World Cup winner was a cut above the rest in across more than 200 outings during the decade in question. Netting 63 times and bagging the Serie A award for assist leader in 2013, Totti led Roma’s charge in Italy and Europe before he hung his illustrious boots.

Antonio Di Natale did not just terrorise defences during his time in Italy, he also waged war on time himself by winning his first Capocannoniere at the age of 33 and then went on to successfully defend it the next season, all the while operating for a provincial outfit like Udinese.

Not among the most glamorous names in this XI itself, Di Natale’s selection may surely raise some eyebrows, but his numbers justify his place in this lineup.

Qualifying for the team of the year for three times in a row, Di Natale scored a staggering 125 goals during the decade – more than any other player in Serie A, a record he holds despite retiring in 2016.

Gonzalo Higuaín is worthy of an inclusion for his 2015-16 season alone, which wrapped up a spectacular 3-year spell at Napoli with no fewer than 38 goals in 42 games. Naturally, the Serie A Golden Boot came in tandem. Despite arriving late in Italy this decade in 2013, the Argentine has 118 goals in only 195 appearances. There can be no questioning the Argentine’s goalscoring prowess on Italian soil.

The goals that he racked up for Napoli, in particular show exactly why Higuaín deserves a spot ahead of striking sensations of the ilk of Zlatan Ibrahimović and Samuel Eto’o.

Buffon had to fight the Inter ‘keeper to cement his spot as the number 1 among No.1’s. Samir Handanović has been a loyal servant to Inter Milan and the Slovenian shotstopper started the decade with a bang, saving a total of 6 penalties in the 2010-11 season, equalling a league record. The Inter skipper also featured in the Serie A Team of the Year thrice, a testament to how much of a brilliant goalkeeper that he is.

Regarded as one of the best and the most consistent defenders of his generation, Barzagli was a staple in the rock-solid Juve backline. Barzagli returned to Italy from Wolfsburg at the start of this decade, and won 8 consecutive league titles with the Bianconeri. Well-known for his strong, commanding physical presence in the box, on both sides of the pitch, the World Cup winner has been hailed for his mastery at the back.

The Frenchman’s mercurial talents were on display in the Serie A for 4 years as he dazzled not just Serie A watchers, but football fans across the world with his flamboyance with his feet as well as his celebrations. Paul Pogba departed to return to Manchester United after putting on a show in Turin, helping Juventus to a Champions League final.

The United youth graduate was an integral part of Juventus, winning 4 consecutive league titles which propelled him in the Serie A team of the year for 4 years straight.

Paul Pogba would’ve been the obvious entrant in the team of the decade, if not for the magic of Totti.

Gifted with a fantastic football brain and a knack for finding the back of the net, Mauro Icardi narrowly misses out on the list. Icardi led the Inter attack for 5 years before leaving for PSG in 2019. The Argentinian target man has a total of 124 goals to his name, in only 219 appearances. Owing to his phenomenal ability in front of the goal, Icardi bagged the 2018 Serie A player of the year award.

His goalscoring exploits at the Parc des Princes is just further proof of what a lethal No.9 Icardi really is.

ABHISHEK DASH
THE DRAWING BOARD