THE TOP 10 GOALKEEPERS OF THE DECADE

In a decade that produced some of the most thrilling encounters of the sport while showcasing the attacking prowess of several teams over the world, credit must be given to the enigmas between the sticks who really brought out their A-game over the last 10 years. From crucial stoppage time saves and match saving penalty saves to single-handedly winning games for their teams, we saw it all. So, as the 2010s come to an end, we at More Than A Game pick the top 10 goalkeepers of the decade to have graced the beautiful game.

Bursting onto the scene with a sensational 2012-13 season on loan at Atlético Madrid, Thibaut Courtois is one of finest to have played this decade. Belgium’s No.1 helped the Los Rojiblancos to win the La Liga in the 2013-14 season, a feat that was certainly a shock to the system as Atleti broke the domestic stranglehold of Barcelona and Real Madrid. After returning to Chelsea after his loan spell, he again was in the limelight has he helped the Blues to lift the Premier League trophy twice; in 2014-15 and 2016-17 season. After two stellar World Cups in 2014 and 2018, where the Red Devils were eliminated in the quarter finals and secured 3rd place respectively, Courtois moved to Spain with Real Madrid.

Unfortunately for Courtois, he has undergone a rough patch and looks far from the superb shotstopper he once was

A veteran of the game, Buffon proved to the whole world that age is just a number. Putting up fine displays for Juventus year after year, he won 7 Scudetti in the last decade alone with the Old Lady. On the receiving end for most of the decade because of the shambolic performances of the national team, the Italian legend reached the Champions League final in both 2014-15 and 2016-17 season with Juve.

Into his second stint with the Bianconeri after a completing poor outing with Paris Saint-Germain, Gigi Buffon will always be regarded as one of the best to have played the game.

Maybe the greatest to ever come out of Spain, Iker Casillas or Saint Iker, as the fans loved to call him, was a stalwart in the Real Madrid and the Spanish squad. Donning the No. 1 jersey for both club and country, Casillas won the first World Cup of the decade while captaining the national side, with some staggering performances to show for. However, his CV reads a glittering one as he won 3 Champions League titles with Real Madrid, one of which came this decade in the 2013-14 season. Maybe the best ever in the business along with Buffon, Casillas moved to FC Porto in 2015, where he has had fine 4 seasons, suffered a heart attack last season, fought back, and is back with the Porto first team.

A true legend, on and off the pitch.

After coming to the fore with fine performances for Slovenia at the FIFA World Cup 2010, Handanović was roped in by Inter Milan in 2012. Since then, he has been the top dog in goal for the Nerazzurri till date. A tall and well-built keeper, Handanović’s reflexes are one to watch out for, pulling saves out of nowhere in no time. A bit underrated in the whole setup, he has always been highly regarded by the Inter faithful and the European counterparts who have played against the skipper of the blue half of Milan.

After helping the Giallarossi in making a sensational comeback against Barcelona in the Champions League and proving his mettle in the Serie A the same season, Liverpool bought Alisson Becker, making him the most expensive goalkeeper in history. Proving the Reds’ decision to splash the cash on him as one of their greatest transfer coupes, Alisson put in a host of brilliant performances to help Liverpool win the Champions League in his first season with the club as well as almost winning the Premier League title in a season where the Merseysiders amassed a staggering 97 points in what turned out to be a historic campaign.

Currently the Brazilian No.1 on fine margins ahead of Manchester City’s Ederson, Becker is one to look out for in the upcoming decade. His Lev Yashin Award win is certainly a reminder to keep an eye out for the goalkeeping gem.

Keylor Navas was at the centre of the Costa Rican fairytale at the FIFA World Cup 2014, where they topped the group of death against the likes of Uruguay, Italy and England, eventually being eliminated by the Netherlands in the quarter-finals, that too in a penalty shoot-out after a stalemate. Real Madrid came calling and the fairytale did not stop there. Being in the middle of the sticks for the Los Blancos, Navas put in some sensational performances and won 3 consecutive Champions League titles with Real Madrid from the 2015-16 to the 2017-18 season, also winning the La Liga in 2016-17.

Currently plying his trade with the Ligue 1 giants Paris Saint-Germain, there’s no stopping Navas as he certainly looks like the piece of the puzzle that the Parisian team have always been missing. 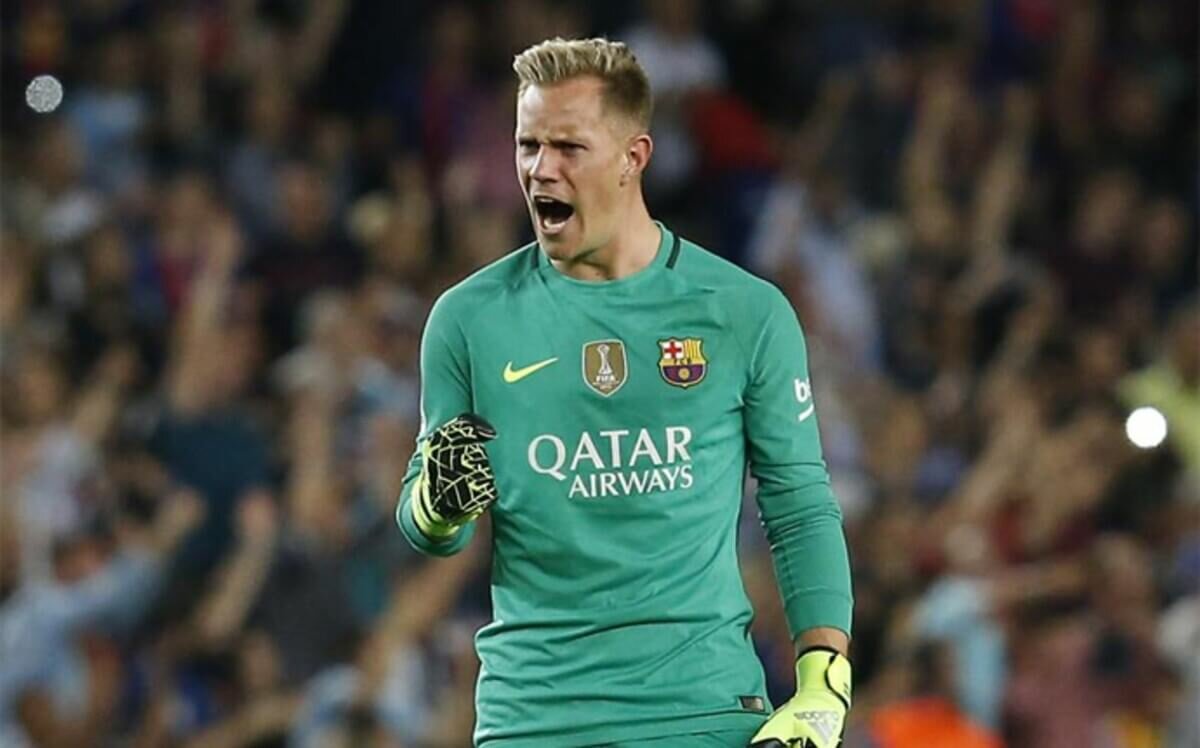 From being a fine young prospect at Borussia Mönchengladbach to putting up superhuman performances for FC Barcelona in the recent past, ter Stegen has heavily evolved in the past decade. After joining Barcelona in 2014, ter Stegen has grown for strength to strength. In his 6 seasons at the club, ter Stegen has lifted the Champions League trophy once and the La Liga trophy 4 times.

Constantly putting his case forward for the national side, he could put forward an equally strong argument as being the best shotstopper in the world at the moment with the finest distribution abilities.

Bayern Munich signed Manuel Neuer from Schalke 04 in 2011 and since then, the German has revolutionized goalkeeping, as we see it now. Regarded as the ultimate sweeper-keeper, the Bayern shotstopper has been a rock at the back for both club and country. With his outrageous athletic abilities in between the sticks and free-flowing passing and positioning that is quite high up the pitch for a goalkeeper, Neuer operates like an extra midfielder.

The former Schalke man has won 7 consecutive Bundesliga titles and one Champions League title with the Bavarian giants. An integral part of the FIFA World Cup winning squad in 2014, Neuer is still the first choice for the Germans, and if it was not for injury troubles and a recent dip in form, he would have secured the top spot in this list.

After being personally scouted by Sir Alex Ferguson, David de Gea was bought by Manchester United in 2011. After the early jitters that the Spaniard was criticised for, he started to show his worth, putting in steady performance and eventually started winning games for Manchester United single-handedly week in, week out. With an extremely unorthodox technique of shotstopping with his feet, de Gea has crafted an entire style for himself that adds to the fact that he is a generational talent.

The best player for the Red Devils for over 6 seasons now, David de Gea has been a revelation throughout the decade, winning one Premier League title and 2 Europa League titles, one each with Atletico Madrid and Manchester United. Out of all of his exemplary seasons, 2017-18 was a personal best as de Gea was a force of nature throughout the campaign. Despite seeing a dip in form in recent times, it has to be said that ultimately, de Gea is only human- a revelation that is also quite recent considering the standards he has set for himself.

Since joining Atlético Madrid in 2014, Jan Oblak has kept an astonishing 128 clean sheets for the Los Rojiblancos. Being at the heart of Atleti’s defensive system, Oblak is an additional wall to their backline that has been famed for its resoluteness. An instant fan favourite, the Slovenian international reads the game beautifully. With great positioning and cat-like reflexes, he can stake a strong claim for being the best goalkeeper in the world.

Oblak has followed his counterpart Handanović’s footsteps and has become a household name in the country. Often underrated due to his understated demeanour, its high time to acknowledge Jan Oblak’s brilliance.

Missing the cut due to very fine margins, the Brazilian shotstopper is one of the best in the Premier League. The Manchester City shot stopper has the passing range and vision that any top central midfielder would strive to possess and is possibly the best ball-playing ‘keeper in the world. While at Benfica, he was the outright best goalkeeper in the league and won 2 Liga NOS titles with the club. Since joining the Citizens in 2017, he has been an integral part of Guardiola’s system and has won 2 Premier League titles with the club, putting in a lot of stellar performances in the process.

Finishing 3rd in the rankings for the Lev Yashin award and currently deputizing under Alisson for Brazil, Ederson must continue to maintain his incredible standards to pip the top dogs between the sticks, a feat he is very capable of accomplishing.

The France and Tottenham captain has always been a brilliant shot stopper. Winning the World Cup with Les Bleus in 2018, Lloris has shown that he is truly world class at top-tier football. Known for his instant decision making and shot parrying abilities, Lloris has been on top of his game for quite a long time now. A fan favourite in North London, Lloris has been under criticism for the few blunders he has made throughout the decade but all in all, he’s one of the best out there.

Another veteran of the game, Petr Čech is definitely a legendary goalkeeper. From his in-game penalty and shootout heroics to help Chelsea win the Champions League as well as the Europa League to saving the West Londoners on numerous occasions and winning 2 Premier Leagues with them this decade, Čech has always been in sublime form.

After moving to Arsenal in 2015, Petr Čech had many ups and downs before he retired in 2019 as a true goalkeeping icon.

After joining Borussia Mönchengladbach from Basel in 2014, the Swiss international has been a constant performer between the sticks for the Die Fohlen. Also, the Swiss No.1, Sommer has been prolific for both club and country in recent years. Currently sitting at the top of the league with Gladbach, Sommer will be looking to keep up his game and win the title for his club.