Borussia Dortmund vs Schalke: Not One For The Faint-Hearted

Hailed as the mother of all derbies, the Revierderby or Ruhr derby between Borussia Dortmund and FC Schalke 04 has developed into the standout rivalry in German football, with the most passionate sets of fans willing on their sides. Based in the Ruhr region, the cities of Gelsenkirchen and Dortmund are separated by less than 20 miles, both situated in the North Rhine-Westphalia region of West Germany. Both clubs come from a similar background with a working-class fan base that share a die-heart affinity towards the beautiful game. For the locals, you’re either a part of The Black and Yellows or The Royal Blues, there is no in between.

Some of the staunchest of supporters go as far as refusing to even say the name of the other club, instead addressing them by the relative location from their neighbouring towns. While Schalke is referred to as Herne-West by Dortmund supporters mockingly, the Royal Blue faithful throw shade by referring to their rivals as Ludenscheid-Nord. The hatred runs deep within the familiar foes in a contest that has proven to be nothing less than a warzone.

The roots of the Ruhr

The rivalry between the two clubs stems from over 9 decades ago when Schalke defeated Dortmund 4-2 on May 3rd, 1925. And with this, the domination of Die Knappen (The Miners) began. One can assume the extent of their ascendancy that it was 18 years and 18 competitive meetings before Dortmund finally managed to come out on top.

Then came the Nazi-influenced Gauliga era which saw the Royal Blues reign supreme over German football. With legend Ernst Kuzzora in the side, famous for its style of play called ‘Schalker Kreisel‘, an early form of one-touch football or tiki-taka, Schalke claimed 6 out of 11 championships during this period.

Then came the Second World War and post that followed the pair’s time in the Oberliga. Fortunes changed for the better for Die Borussen as they completely dominated this era, clinching more than double of the wins their arch-rivals had against them in that time.

And then in the year 1963, as its is universally referred to now, the ‘Bundesliga’ was introduced. This era brought about an early domination from Dortmund, witnessed the resurgence of the mighty Schalke and since then, it has been an evenly matched contest between the two sides.

Dortmund quickly started to dominate the derby on the national stage with a team headed by their legendary strikers- Timo Konietzka and Lothar Emmerich. Emmerich till day remains the Revierderby’s all-time top scorer with 10 goals and the only player to score a hat-trick from both sides in the history of this fixture in the Bundesliga era.

The tide of the tie swung once again when Schalke went 12 competitive games without a defeat between 1968 and 1977.

With the rivalry intensifying, the first legendary encounter came in September 1969. Schalke took the lead in front of 40,000 fans at Dortmund’s former home, Stadion Rote Erde which resulted in fans of the visitors storming the pitch. The police released their dogs in order to try and regain control. However, one dog instead bit Schalke defender, Friedel Rausch. After all the drama came to a close, so did the heated tie in a 1-1 draw. 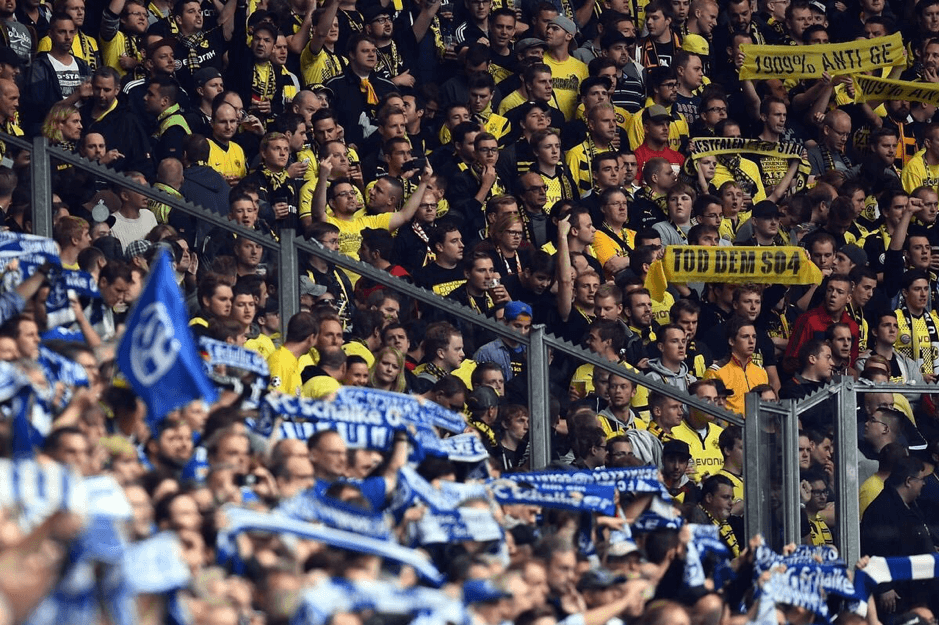 As a reply to earlier events, in January 1970, Schalke president Gunter Siebert hired lions from the local zoo to accompany the players out at the start and stand guard around the pitch alongside the stewards. The derby was both literally and figuratively starting to show its teeth.

Divided by region, united by success

1997 was quite a remarkable year for both the clubs from the Ruhr region. Firstly, Schalke went on to win the UEFA Cup after defeating Inter 4-1 on penalties after the aggregate score remained 1-1 over a two-legged tie. This triumph was followed by their rivals taking notes with their win over Juventus to win the UEFA Champions League in the same year. As the fans celebrated, Franz Beckenbauer famously said, “The heart of German football beats in the Ruhr.”

Since then, the fixture has continued to provide several thrilling encounters over the years. In December 1997, Schalke were trailing 2-1 in the final minute of their Bundesliga game at Signal Iduna Park. What happened next made history.

The visitors got forward in the search of an equalizer and Marc Wilmots won a corner for them. Olaf Thon took it, Thomas Linke flicked it and goalkeeper Jens Lehmann, out of everyone came up for the corner and as fate would have it, the German nodded the ball home for the equalizer. 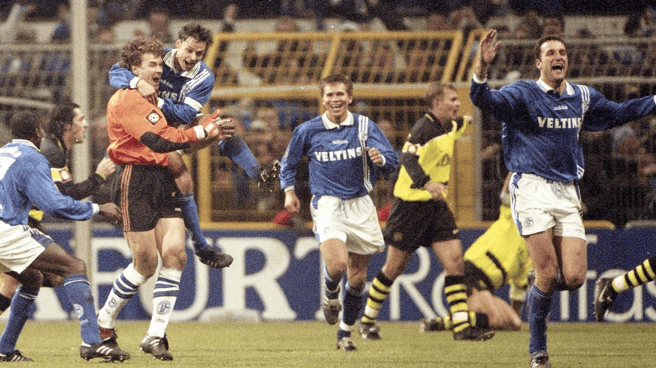 Out of everyone, Schalke goalkeeper Jens Lehmann scored the winner and put the game to bed (T-Online)

It was the 33,325th goal in Bundesliga history, but a first by a goalkeeper from open play.

To add fuel to the fire of this enmity, Lehmann broke the hearts of many Schalke supporters when he returned to Germany from Milan and joined Dortmund in 1999.

90 minutes that became one for the ages 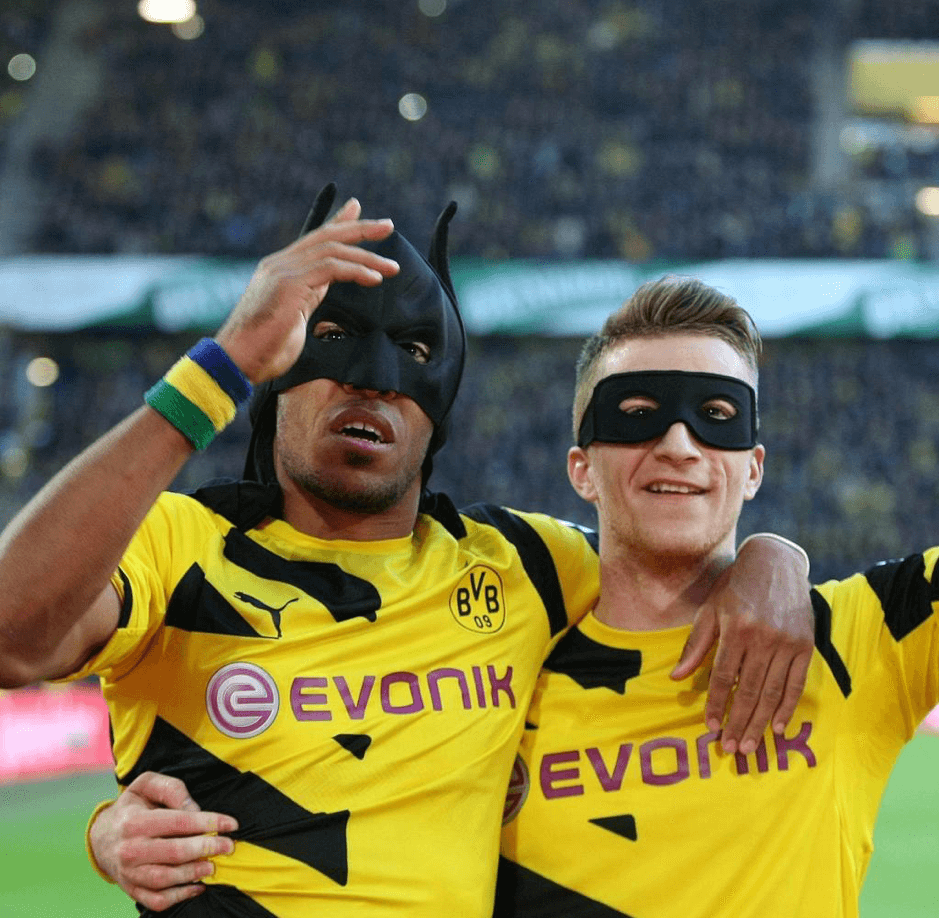 Batman and Robin: Aubameyang and Reus come to the rescue for Dortmund on derby day in 2015 (Welt)

In 1940, Schalke hammered their rivals with a whopping scoreline of 10-0, which till day remains the biggest margin of victory in this fixture. However, Dortmund rose from the ashes with a 1-2 win which ended a nearly 7-year undefeated streak for Schalke in the derby.

In May 2007, it almost took to traumatic proportions as Schalke’s championship dreams were shattered. They lost both the derby as well their lead at the top of the table which they had held for 3 months after a 2-0 defeat to the Black and Yellows; all this transpiring on the penultimate day of the season.

Both Schalke and Dortmund have blown sizeable leads in recent Revierderby history. In 2008, Dortmund came back from 3-0 down to levelling the scores at 3-3, with Alex Frei coming up trumps with an assist and 2 goals. In November 2017, Dortmund lead the derby 0-4 after 25 minutes. However, Schalke fought against the odds and ended the game at 4-4, with a thunderous 94th-minute header by Naldo past Roman Weidenfeller.

In April 2019, red cards to Marco Reus and Marius Wolf and a 2-4 win for the Royal Blues dented Dortmund’s title hopes on matchday 31.

The Revierderby has averaged 2.99 goals per game over its 93 renditions in the league, while the record between the clubs is brilliantly balanced. The Black and Yellows lead the league titles with 8 to Schalke’s 7, while Schalke have 5 DFB Pokal trophies as opposed Dortmund’s 4. Schalke’s UEFA Cup win in 1997 fares well against Dortmund’s Champions League victory in the same year. The Signal Iduna Park faithful do believe they have the upper hand, as Schalke’s last title came way back in 1958 while Dortmund were crowned Bundesliga champions in the 2011-12 edition.

Who will get the bragging rights in the next Revierderby?

With the first fixture scheduled on 26th October at the Veltins Arena and the reverse fixture on 14th March at Signal Iduna Park next year, both teams will look to get the upper hand in the ever so fierce rivalry. With the recent sale of Yevhen Konoplyanka to Donetsk and both Nabil Bentaleb and Axel Witsel out with injuries, Nubel will look up to Amine Harit and Benjamin Stambouli to stand out while Lucien Favre will be hoping for eventful outings for his key men- Marco Reus and Jadon Sancho.

The rivalry between these two Ruhr giants is immense, but there remains a mutual respect between the clubs, perhaps stemming from their common working-class roots. The teams have even helped each other out financially on a number of occasions, the most famous example coming in 1974 when Borussia were struggling with debt after relegation.

However, on the day of the derby, all fun and games go out of the window.

ABHISHEK DASH \ THE DRAWING BOARD