ANIL KUMBLE: A BOWLER’S DREAM AND A BATSMAN’S NIGHTMARE 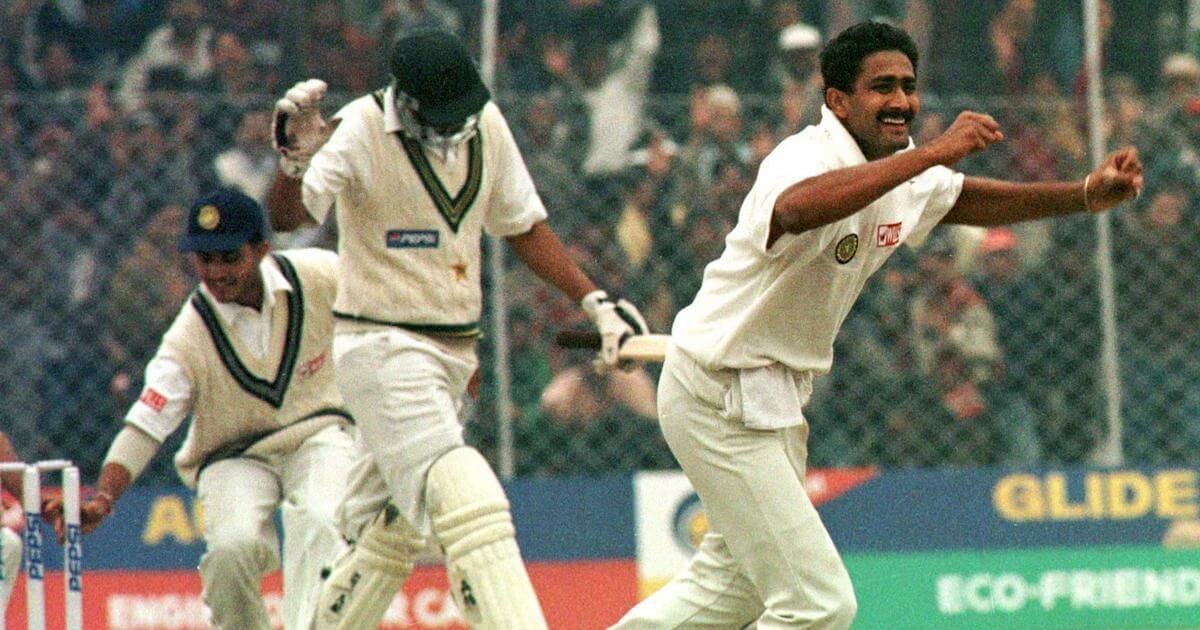 February 7th, 1999. It was the fourth day of the 2nd test between India and Pakistan with Javagal Srinath charging in from one end and Pakistan reeling with 9 wickets down in the second innings with an inevitable loss in sight. Srinath bowled 2 wides in a single over, in an attempt to not get the batsman out so that his dear friend, a certain Anil Kumble, can try and take his 10th scalp of the innings; and when VVS Laxman caught Wasim Akram at forward short leg, Anil Kumble wrote his name in the history books and that too, in gold. But, before we dive into India’s greatest ever spinner’s best outing, we must roll back the years and study the rise of a player who was a trailblazer in every sense of the word.

Born in Bengaluru, Anil Kumble made his first-class debut for Karnataka with a stormer as he took 4 wickets and impressed as an upcoming leggie. He made his international debut in 1990 in an ODI against Sri Lanka, but his major breakthrough came after his performance for Rest of India against Delhi in the Irani Trophy. Kumble picked up a staggering 13/138 and spearheaded the team to victory. Since then, he never looked back.

Known for his aggression and playing on the edge on the pitch, Kumble was the total opposite off it. As calm and composed one can be, the masterful spinner was never one to steal the limelight for anything that didn’t concern the 22 yards. On the international stage, he let his cricket do the talking and boy, did it say its piece as Kumble performed brilliantly on India’s tour of South Africa and established himself as the next big thing for India. His sublime spell of 6/53 in the 2nd test where he ran through the Proteas top-order was an indication of how special the lad was, just two years into his debut in the longest format of the game. Ending up as India’s highest wicket-taker with 18 to his name, just two behind the legendary Allan Donald (20), all eyes were on Kumble to marry such excellence with consistency.

He didn’t relent just there and continued to dumbfound batsmen across the globe, eventually holding the record as the fastest Indian bowler to 50 Test wickets and the second fastest to 100 test wickets.

Playing for English county Northamptonshire in 1995, Kumble took 105 wickets, emerging as the highest wicket taker and the only bowler to reach the 100-wicket landmark that year. For such an impeccable run, Wisden named him one of their five Cricketers of the Year in 1996. And from there on, Kumble became a talisman for his country.

He carried this form onto the grandest stage of them and all, finishing the 1996 World Cup as the highest wicket-taker, a tournament where India bowed out in the semi-final. However, ending up with 15 scalps as the curtains closed proved to the nation watching that Anil Kumble was a beast in both formats and was truly a generational talent. Then, after 3 years of such fabulous bowling performances, Kumble achieved something that only Jim Laker had achieved prior to him. In the 2nd test at the-then Feroz Shah Kotla (now referred to as the Arun Jaitley Stadium), Kumble picked up all 10 wickets of Pakistan in the 2nd innings and led India to a huge victory. Kotla, being known as Kumble’s fortress thereafter was a breeding ground for the seasoned leg-spinner as he ended the 2nd innings with the figures 10/74 and an astounding 14/149 to sign off in style. This bowling performance is regarded as the second-best bowling performance of all time, just after Jim Laker’s 19-wicket test match against Australia.

Nicknamed ‘Jumbo’ because of the speed of his deliveries and big feet, Kumble was as bighearted as they come. After getting hit on the jaw by Merv Dillon while batting, Kumble came out to bowl with a bandaged face and a broken jaw.

Among Kumble’s breathtaking showings, the man will always be remembered for this inspiring performance against the Windies as he scalped Brian Lara and bowled a 14-over spell. Kumble’s candid take of the dismissal indicated his half-glass full approach to things, despite having a bandaged face against one of the greatest batsmen to ever grace the game.

“I got Lara out, probably because he looked at my bandaged face and didn’t really focus on watching the ball I bowled. Maybe, I scared him that way. Watch the video. Every time you hit pad in front, you appeal. It doesn’t matter whether you can open your mouth or not.”

In 2004, Kumble became the highest wicket-taking Indian bowler when he surpassed Kapil Dev’s record of 434 test wickets. Kumble was always a prime pick for the team as he was a beacon of consistency throughout his career and looking back, he had delivered on the promise he showed in 1992 in a manner that not even he could have predicted in his wildest dreams.

The intimidating leggie retired from ODI cricket in 2007 after India’s dismal show at the ICC Cricket World Cup the same year. Kumble finished his ODI career with 337 wickets in 271 matches, a record worth tipping your hat to. Later that year, Kumble again entered the record books with his maiden test ton, against England at The Oval. He made an unbeaten 110 and had a last wicket partnership of 73 runs with S. Sreesanth. With this ton, he became the person to take the greatest number of Tests to get to his first ton with 118 matches, breaking Chaminda Vaas’ record of 96 outings. Jumbo finished with 619 international test wickets, only behind Muttiah Muralitharan and Shane Warne and as India’s most successful bowler. If his ODI career was worth tipping your hat to, his Test career was worth bowing down in front of the cricketing royalty that he evolved into. In the midst of all of his sensational scalps, Kumble’s favorite opponents were the Aussies, with 111 test wickets against the team from Down Under.

Kumble also held the Test captaincy for a brief period of time and eventually hung up his boots in 2008, playing his last test match against Australia.

Jumbo was a part of the Royal Challengers Bangalore in the Indian Premier League. He captained the side in 2009 and reached the final of the tournament, eventually losing to Deccan Chargers. He retired from IPL cricket after 3 seasons and since then, has worked as mentor for Royal Challengers Bangalore and Mumbai Indians. In addition, Kumble was also appointed the Indian head coach in 2016 for a period of one year.

In 2015, Anil Kumble was inducted in the ICC Cricket Hall of Fame for his outstanding achievements throughout his career. Being an engineer and also known for his passion for photography, Kumble was always found with a camera in the dressing room, always ready to capture the ‘Kodak moment’ of the match.

Kumble started his career as a fast bowler, but eventually became a leg-spinner with an unorthodox style. He wasn’t a big turner of the ball like Warne or Muralitharan but used his pace variations and side-spin to his massive advantage. He was very famous for the ‘flippers’ he bowled, using his pace variations to full affect, with a knack of taking wickets through caught-and-bowled dismissals as batsmen would often be taken aback by the sheer pace at times. Kumble, with Muralitharan, holds the record of most number of caught-and-bowled test dismissals (35), unsurprisingly. Also known for bowling tirelessly, Kumble used to bowl in longer spells without flickering a beat.

For a bowler who relied more on accuracy, variations and bounce rather than spinning the ball, Anil Kumble is one of the finest spinners the world has ever seen. Since his retirement, India has produced many world-class spinners, but none has come even close to the mighty performances of Jumbo, who remains one of a kind to have graced the cricketing world.