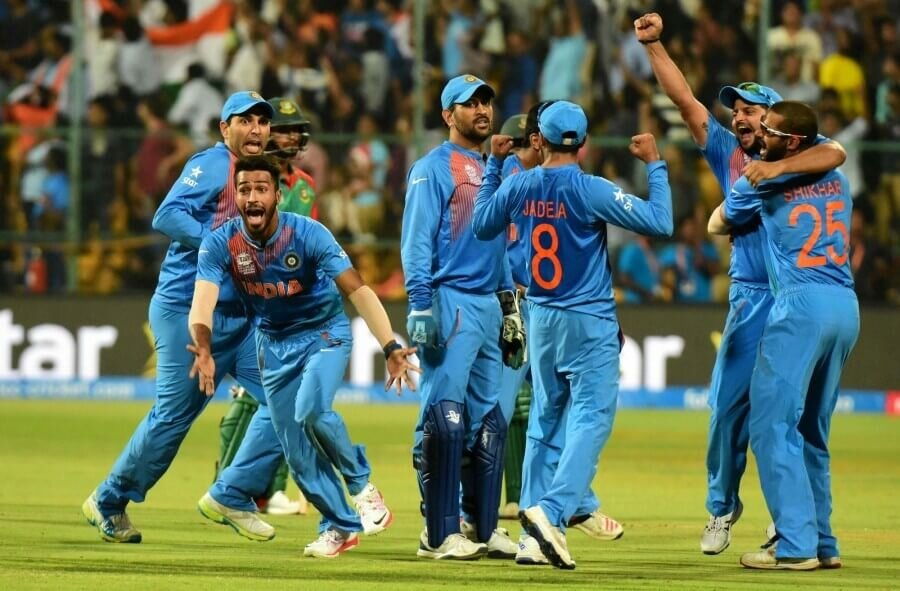 The last time India lifted an ICC trophy before the start of the 2016 T20 World Cup was in 2013 when they lifted the Champions Trophy in England. Two years earlier, the side had lifted the most coveted trophy in cricket as they were crowned 50-over world champions for the second time. At that time, India were the outstanding team in limited-overs cricket. Due to this impeccable form and undeniable home advantage, the Men in Blue were slated as overwhelming favourites for lifting the sixth edition of the comparatively newly introduced World Cup format which commenced in 2007 where India stunned the world by winning the title, sending a clear message that skills and instincts trump experience in this slam-bang format.

Fast-forward to the first match of the tournament in 2016, India faced New Zealand- the team they have always found difficult to beat. As the match unfolded, it becomes obvious that the Kiwis were going to get the better of the home side, again. The spin twins of Mitchell Santner and Ish Sodhi wreaked havoc by picking 7 wickets between them. This sent shockwaves across the sub-continent and the jitters were felt by each of the billion strong community.

However, India managed to pull their socks up against their arch-rivals Pakistan by beating them comprehensively with 6 wickets to spare. Next up was India v Bangladesh. A supposed cakewalk.

Come 23rd March 2016, all attention shifted to the M. Chinnaswamy Stadium in Bangalore. Bangladesh won the toss and elected to bowl on an atypical slowish surface. Shikhar Dhawan and Rohit Sharma provided a decent start, but the rest of the Indian batsmen failed to gain any momentum throughout the innings. With a paltry total of 146, Bangladesh sensed a rare chance to topple the favourites.

India’s bowling attack consisted of Ravi Ashwin, Ravindra Jadeja, Jasprit Bumrah, Ashish Nehra and Hardik Pandya- a perfect balance of pace, swing and spin. But the question was: had India posted a defendable total for their bowlers to work with? It certainly looked like they had not when Bangladesh reached 67-2 after 9 overs with Sabbir Rahman and Shakib Al Hasan at the crease.

To bowl the 10th over, MS Dhoni tossed the bowl to part-time off-spinner Suresh Raina. This led to a few eyebrows being raised, as India’s skipper had opted to ignore his frontline bowlers at a crucial stage in the game. However, Dhoni had his own plan. He always did. His brave decision was immediately vindicated. Raina spun an innocuous delivery down the leg-side, but Rahman got into an awkward tangle and overbalanced, allowing Dhoni a fraction of a second to complete the stumping. The experienced wicketkeeper whipped off the bails, sending Rahman on his way. A potentially game-changing moment.

The captain of Bangladesh, Mashrafe Mortaza, promoted himself to no. 5 as a pinch-hitter, but could only hit one maximum before being dismissed by Jadeja. With the score at 95-4, and the match in the balance, Ashwin came on to bowl the 13th over and struck gold, picking up the crucial wicket of Shakib. The ball gripped and turned, found the edge of the bat and was caught by Raina at first slip.

In came Soumya Sarkar. The upset was still on the cards. Alongside Mahmudullah, the pair combined to accumulate 31 runs to put Bangladesh on top. All looked dark and gloomy for India, as Bangladesh only required 21 to score from 15 deliveries with Mushfiqur Rahim yet to come. After breaking a billion hearts in the ODI World Cup in 2007, where they dumped India out of the tournament, Bangladesh had a chance to do so all over again and earn the bragging rights.

Ashish Nehra, bowling the all-important 18th over had to pick up a wicket to inject some life into the contest. However, he struggled at the start of the over, bowling poor deliveries and letting the match slip further away. With India’s hopes fading fast, Nehra bowled a juicy full toss which Sarkar mishit straight to Virat Kohli at long on. He could not believe what he had done, but Bangladesh remained in the box seat as Mushfiqur made his way to the middle. Nehra conceded another boundary from the last ball of the over, easing Bangladesh’s nerves and leaving them needing 17 from the final two overs.

The Bangalore crowd were as engaged as ever. But they knew at the back of their minds that this might not be India’s day. After conceding 26 from his first 3 overs and struggling in the field, Bumrah finally came into his own by bowling an excellent penultimate over, meaning that Bangladesh required 11 to win from the final over.

With Mahmudullah on strike it appeared to be Bangladesh’s game to lose. India had no other option but to throw the ball to Pandya. Nehra offered some last-minute encouragement as Dhoni set the field. It was crunch time.

Pandya succumbed to the pressure early in the over, giving away 9 runs off the first 3 balls. Mushfiqur’s timing and placement were on full display, and after striking the second boundary of the over, he was in celebratory mood with the game seemingly in the bag. Yet as the saying goes. “you never celebrate before you’ve won it.” Still, surely Bangladesh could not lose. With 2 needed off 3 deliveries, they were on the brink of sending India packing once again.

A dejected Pandya trudged back to his mark, before running in to bowl a length delivery which hurried Mushfiqur who was shaping to pull the ball over mid-wicket for a maximum to finish the game. Instead his mistimed stroke went straight to Dhawan at mid-wicket. The excitement was palpable. “Well, now this is excitement. There really was no need to go the aerial route” says Sunil Gavaskar on air. All they had to do was play along the ground to wrap up the victory.

To Bangladesh’s benefit, the batsmen had crossed, leaving Mahmudullah on strike to take it home. Dhoni swapped fielders around as the tension continued to build. Meanwhile, Pandya was doing his best to gift the match away. This time he produced a juicy full toss, but Mahmudullah, much to the delight of Indian fans, mistimed his shot, picking out India’s best fielder, Jadeja, who covered considerable ground to gobbles up the catch. Gavaskar appeared almost frustrated with how the Tigers were handling the situation. “Once again, trying to play the glamour shot” he exclaimed. Out of nowhere, they now needed 2 to win from the final ball.

Sensing an improbable victory, there are now several inputs coming from various senior players in the side. At last, Dhoni pans his eyes and ears towards bowling veteran Nehra. A brief discussion ensues, and the message is relayed to Pandya. 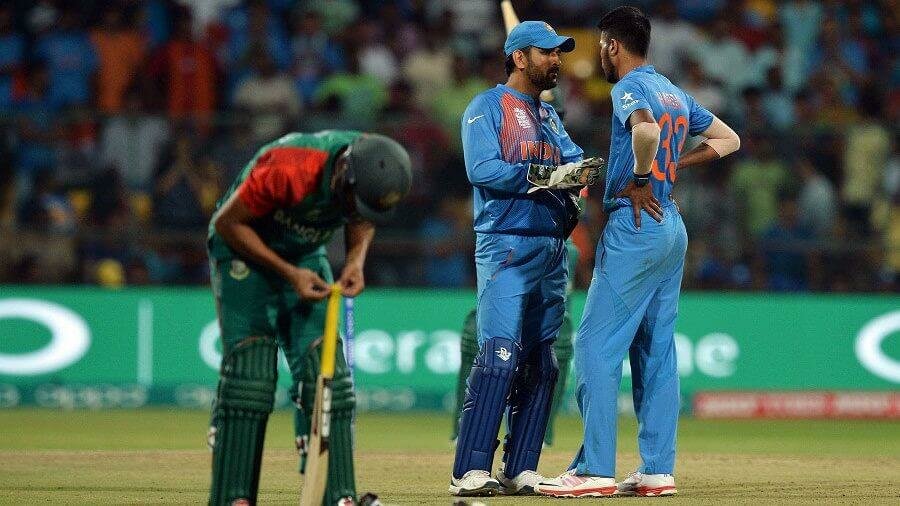 Pandya was all ears as Dhoni laid out his masterplan

Out of all the deliveries that he could bowl, it is a wide, good length delivery out of Shuvagata Hom’s swing, which goes straight to the one-gloved Dhoni, who’s not taking any chances as he runs like a bull towards the stumps to complete the run-out. Mustafizur Rahman is well short. India win by 1 run; the finest of margins and India erupts as they have snatched victory from the jaws of defeat. Or rather, Bangladesh has snatched defeat from the jaws of victory. India have pulled off the one of the greatest comebacks in recent memory and considering the scale of the competition, it was one for the ages. One that will remain etched in every cricket fanatic’s memory. On that day in 2016, as soon as Dhoni ran towards the stumps, India jumped, screamed, screeched but moreover breathed a sigh of relief to see another day in the tournament. 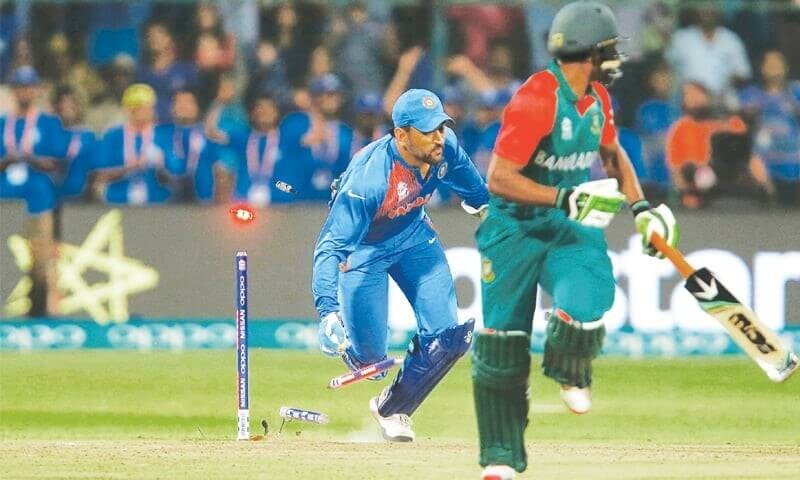 But why did Pandya bowl a half tracker outside off to save the match when he could bowl all those “go to” deliveries such as a yorker or a slower delivery? Nehra explains in an interview with Cricbuzz.

“This is one of my favourite cricketing memories with Mahendra Singh Dhoni. Me and Mahi bhai (brother) had a chat regarding where Pandya should bowl. A bouncer is a good option, but batsmen may have enough time to take a single before the keeper could collect and have a shy at the stumps. A yorker may give away a single as well. We don’t want to tie the match. We want to win it. Seeing the quality of batsman on strike, I advised Mahi bhai that Pandya should bowl a length ball. It might end up being a boundary or go in the air or most likely end up in keeper’s hands who could then try and force a runout. Then Mahi took a moment for himself to think and then advised me to relay the message to the bowler about the plan.”

It’s these kinds of moments where a captain wishes to lead, a player wishes to experience, a bowler wishes to execute, and a nation wishes to be a part of, and this match is just another reason to love this game. 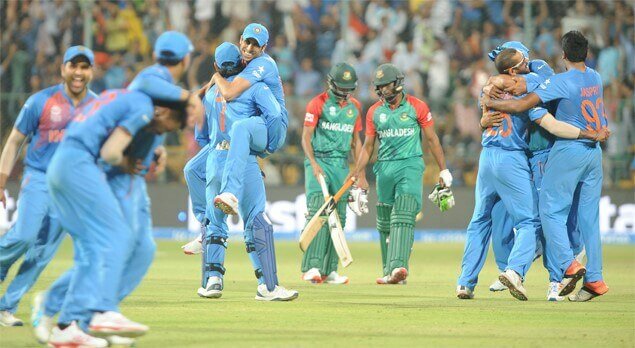 Harsha Bhogle once said, “I still believe that the one thing which could bring a nation or world together, making them forget all their problems is sports.” And that day, a billion hearts rejoiced.

SRINIVAS SADHANAND \ IN CONVERSATION WITH