As we say this, we say this on the behalf of everyone: this the best Delhi side we’ve seen in the 13 seasons of the Indian Premier League. Not to forget, Delhi used to have the likes of AB de Villiers, Tillakaratne Dilshan, David Warner, Pat Cummins and numerous other superstars amongst their ranks, but this Delhi side is special. Special in a sense that it is well balanced and working wonders under the brilliant leadership of Shreyas Iyer. On the other hand, the Royal Challengers Bangalore have been good this season, but have looked clueless at times as the skipper Virat Kohli still doesn’t have the perfect balance in the team.

And yesterday again, they looked clueless as the Delhi Capitals hammered them by 59 runs. From the South African pace show and the Marcus Stoinis fireworks to the Capitals’ spin magic, here are the hits and misses from the enthralling encounter between the two sides.

The Capitals have the best fast bowlers on show

Kagiso Rabada and Anrich Nortje are the best fast bowling combination in the IPL this season. Rabada in particular has been outstanding, leading to comments such as “KG is the best bowler so far, the authorities should simply pack up a Purple Cap along with his visa before the tournament even starts” from the likes of Harsha Bhogle. The South African duo have been extremely good in the death overs and equally as effective at the start. Their pace makes them a handful on all pitches and what really sets them apart is their constant desire to keep going for wickets in all situations.

Ashwin and Axar: The Spin Twins

Delhi Capitals were questioned when they brought in Ravi Ashwin from Kings XI after he had had a difficult time leading the franchise. Despite getting injured in his very first match, Ashwin once again showed that he remains one of the best spinners in the world and will be a vital cog in the Delhi machinery if they are to go deep into the tournament.

Axar Patel has to be one of the most underrated players in India and has been on the fringes of the national side for over 4 years now. He is a very skillful spinner and his wicket of Aaron Finch just exemplified his understanding of the conditions and his unshakeable control over the line and length. Ashwin and Axar gave up 44 runs for 3 wickets in 8 overs, they were economical, effective and fully optimized the helpful Dubai pitch. 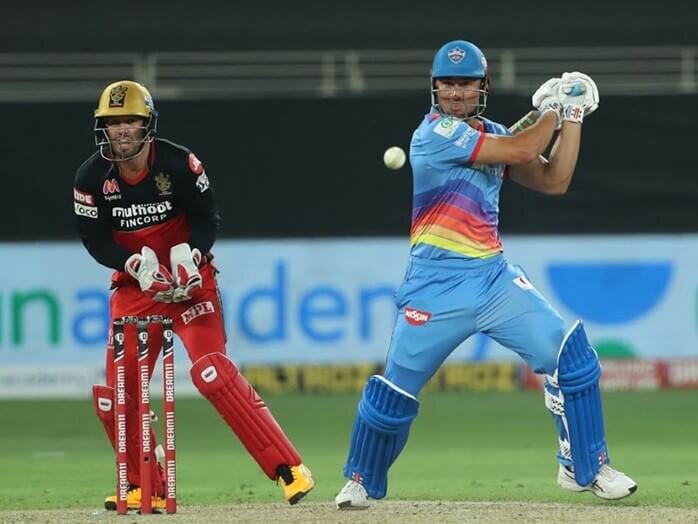 After a successful English summer, everyone expected Marcus Stoinis to be performing well in this season’s IPL. But performing well is an understatement to say the least. The powerful Australian has been rampant for the Delhi Capitals. Clearing the in-field just with a flick of the wrists and hitting the ball out of the park with ease, Stoinis did it all yesterday. The quickfire 53 from the Aussie to finish the innings set up a perfect platform for the bowlers to shine. Stoinis has been brilliant for the Capitals, but some might want him to play up down the order, something which we all can agree to.

During the Big Bash League, the Australian all-rounder opened the innings for the Melbourne Stars and scored heaps of runs, showing what he is capable of when playing up the order. If not the opening slot, maybe Delhi can play him at No. 3 to give him time to get his eye in and let him free his arms, taking the attack to the opposition every single time. But as of now, he’s pulverizing oppositions at 5 as well.

Prithvi Shaw needs to take it one step further

Prithvi Shaw has been brilliant for the Capitals this season, attacking the bowlers from the offset and scoring important runs in the process. But each and every time, everyone feels there is a big innings coming and Shaw falters and has throws his wicket away. Still very young of course, Shaw can look to maturely guide his innings, giving him the opportunity to score big in the process.

At times, even when he has been scoring wonderfully, Shaw has looked restless and given away his wicket in an attempt to accelerate his innings even further. If he does play more carefully and in a composed manner, he’ll be able to do what KL Rahul is doing for the Kings XI Punjab. And if he is out there till the end, he can then again go ballistic and show why he is one of the best young talents on display at the Indian Premier League.

This sounds like the same old story that is repeated each season for the Royal Challengers as they continue to be over-reliant on the pair and the shortcomings of the squad are often laid bare if the two of them (or atleast one of them) are not able to produce. The batting lineup, apart from a couple of Paddikal performances has looked very susceptible with Finch under pressure.

Their power hitters aren’t being able to maximize the opportunities as well, either meaning that either of Kohli or AB De Villiers are very much needed for the Bengaluru team if they are to chase targets or set imposing totals. However great these two batsmen maybe, a team is always a sum of its parts and in RCB’s case, it looks like the other parts aren’t quite at it currently.

RCB’s woes with the ball continue

The bowling unit of RCB looks short of real matchwinners and the loss of Steyn and Yadav (both of whom were extremely expensive) to injuries has decimated the squad. Those two were to be the spearheads of the pace attack which perhaps says more about the team’s composition than it does about anything else. The squad looked imbalanced with the likes of Isuru Udana, Navdeep Saini and Moeen Ali going for big runs against Delhi.

Saini and Chahal have been two better performers for RCB but they too have been taken for a few runs in most matches. The management needs to adapt to the UAE conditions better as its not just the losses but the manner in which they have lost, leading to them having the worst net run rate so far in tournament which remains a grave matter of concern for the team.