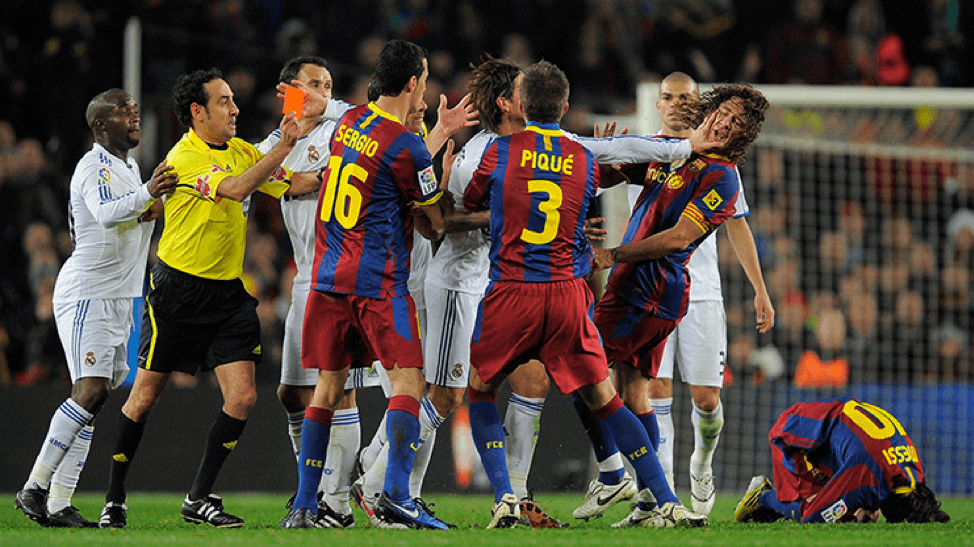 When we talk about the greatest rivalries in sport, the “clash of the Titans” battles are the ones that stir up a conversation. Ardent disciples of the game itself would reveal that there’s something in the air when the sport’s finest come face-to-face as it truly is everything or nothing. Contests of the highest order such as those between the New York Yankees and the Boston Red Sox in baseball, the Boston Celtics and Los Angeles Lakers in basketball or Australia vs England in cricket are ones that continue to take the sport as a whole to its ultimate heights. However, rarely is there ever more of a fervor for a match than the ‘El Clásico’ (The Classic) when Real Madrid and Barcelona in what is football’s advertisement of sporting excellence.

To achieve such a moniker, there must be some magic in both the teams; their histories must be intertwined and yet poles apart and most importantly, their players must have been mesmeric if not god-like. Well all of this is indeed true and then some more.

As many football fans are aware, the beautiful game was spread all across Europe and beyond by English settlers during the days of the British Empire and it was no different in Spain where English merchants and traders introduced it to the local people.

‘Los Blancos’ were formed as Madrid Club de Futbol on 6th March, 1902 and were the main club to propose an idea for the Spanish Cup (now known as Copa Del Rey) in the very same year as a competition named the Copa de la Coronacion was played to celebrate the coronation of King Alfonso XIII. In keeping with this gesture from the club, Madrid Club de Futbol officially became Real Madrid Club de Futbol after the King bestowed this honour on the club in 1913. Ever since then, Real Madrid has served as somewhat of a symbol of the elite football club in Spain, a team supported by the royals and cheered on by the political and economic elite.

FC Barcelona on the other hand were formed on the 29th of November 1899 after an advertisement was floated by Swiss athlete Hans Gamper in a local newspaper asking for football enthusiasts in the city to meet up for a game of football twice a week. True to their city’s multicultural heritage FC Barcelona’s first president was a Swiss man named Walter Wild.

A time when external factors had no say in footballing matters

The very first Clasico was played on 13th May, 1902 in one of the semi-finals of the Cope de la Coronacion and was won by Barcelona 3-1. The rivalry took birth that day but wasn’t to be as politically motivated, aggressive and even somewhat toxic as it has been in the recent past. Both the clubs accepted their positions as the beacons of the people of their cities and the pre-Spanish Civil War era was one of sporting excellence on both sides with the Blaugrana winning 13 straight matches between 1917 to 1928 and Real Madrid returning the favour with 14 straight wins between 1931 to 1935.

The Spanish Civil War broke out in 1936 as a fight between the conservative monarchists, the Nationalists backed by General Francisco Franco’s forces and the Republicans loyalists, faithful to the Second Spanish Republic comprising mostly of people from the Basque and the Catalonian region. This was seen as a class struggle between the elite and the common man, each with different centers of power. The Conservatives had their base in the traditional capital of Madrid whereas the Republicans had set themselves up in Barcelona. This basic divide was to play a monumental role in the futures of the two sides as once the war ended with Franco’s capture of the city of Barcelona, the football club too was viewed by him and his government as a manifestation of the separatist ideologies.

One of the more noteworthy examples of this was seen in the 1943 semi-finals of the Copa del Generalisimo (Copa del Rey) wherein FC Barcelona won the first leg at Camp Nou 3-0. Upon the arrival of the Catalan team’s players in Madrid for the second leg, the legend goes that they were subtly reminded of the huge favours done to the club by Franco by simply allowing them to exist. What happened next is perhaps one of the best examples of throwing in the towel in team sport as the team which had won 3-0 in the first leg subsequently lost the second leg 11-1, the largest margin of victory in the history of El Clasico till date.

Another thorn in the minds of the Catalonian fans was the non-transfer of a certain Alfredo de Stefano who was initially brought to Spain by Barcelona and even appeared in a friendly for them during the pre-season in 1953. This transfer though was not recognized by the Spanish Football Federation due to a conflict between the Colombian club Millonarios and his parent club River Plate. The Real Madrid president of the time, Santiago Bernabeu swooped in and promptly brought the player to Madrid and the rest as they say is history.

The most recent such controversial move involved the sublime Luís Figo. In 2000, Real Madrid’s then-presidential candidate, Florentino Pérez, offered Barcelona’s vice-captain Figo $2.4 million to sign an agreement binding him to Madrid if he won the elections. If the player broke the deal, he would have to pay Pérez $30 million in compensation. When his agent confirmed the deal, Figo denied everything, telling his Barcelona teammates Luis Enrique and Pep Guardiola that he was not leaving and they conveyed the same message to the Barcelona squad.

Once Perez had won the elections, the only way Barcelona could prevent Figo’s transfer to Real Madrid was to pay the penalty clause, $30 million. That would have effectively meant paying the fifth highest transfer fee in the history (at the time) to sign their own player. The Barcelona board refused to sanction such a move and on 24th July 2000, Luis Figo was presented as a new Real Madrid player, the latest in their line of Galactico signings.

On his return to Barcelona in a Real Madrid shirt, banners with Judas, mercenary and other choice words were hung around the stadium. In his third season with Real Madrid, the 2002 Clasico at Camp Nou produced one of the defining images of the rivalry.

Despite being revered around the world, Figo continues to make the blood boil amongst Barcelona fans to this day

Figo was mercilessly taunted throughout; missiles of coins, a knife, a whisky bottle, were raining down from the stands, among the debris was a pig’s head.

Real Madrid were the team to reckon with, not just in Spain but also in Europe when they won the European Cup 5 times in a row in a total of 6 triumphs during the 1950-60s. During a span of 16 years from 1953 to 1969, they would win La Liga 12 times, proving their worth and sheer dominance to the rest of the world.

For Barcelona, their greatest period of dominance has arguably been the modern era wherein they have won La Liga 10 times in 15 years from 2004 and have also added 4 Champions League trophies to their burgeoning silverware collection.

A story of identity and triumphs

FC Barcelona have always identified themselves as a team which plays the beautiful game in a manner which transcends the dimensions of sport and merges with the magic of art. This was exemplified by one Johann Cruyff during the 1970’s and later during his role as the manager of Blaugrana during the 1980’s and early 90’s. His influence on the club was so great that it changed the entire philosophy of the club and transformed the way they viewed the game. His legacy was carried forward at first by Frank Rijkaard and then most successfully by Pep Guardiola, who helped develop inarguably one of the greatest players the world has ever seen in Lionel Messi.

Messi has not only obliterated all Barcelona and Spanish records, but his incredible consistency over a period of almost 15 years has often defied belief. Therefore, it is no coincidence that his career has coincided with the greatest period in Barcelona’s history. Blessed by generational talents such as Xavi, Andres Iniesta, Carles Puyol, Sergio Busquets and Gerard Pique who have ensured that the name of Futbol Club de Barcelona is synonymous with grand success and simply mesmerizing football in the minds of the modern fan, this era for the Catalans has been a dream.

Real Madrid’s desire to win has always been present from the days of Di Stefano and no one has exemplified it better than Cristiano Ronaldo, who in his 9-year stay at the club not only broke the all-time goalscoring record for the club, but also scored at an unbelievable rate of more than a goal-a-game during his entire stay. Los Blancos’s crowning achievement during this period surely was winning the Champions League thrice on the trot, with Ronaldo finishing as the topscorer each time. This was the first such instance when the Champions League (since its inception in 1992 from the European Cup) was retained by a club. He was a phenomenon at the club and led Real Madrid out of the shadows of Barcelona during the most successful period in the Blaugrana history.

The entire Clasico rivalry during the 9-year period from 2009 to 2018 came to be billed around the Ronaldo vs Messi tug of war and divided fans all across the planet with each person pledging their allegiance to one of the megastars and therefore the teams.

The 2017 referendum in Catalonia where the major talking point was a call for Catalonian independence has once again brought about a focus on the political and cultural aspect of this rivalry and brought about many incidents, the most notable of them being the booing of Gerard Pique by his own national team supporters. The hostility sure has returned amongst the supporters but thankfully there haven’t been the notorious incidents as had been seen in the past. No matter what the circumstances though, one thing is for sure, football today is synonymous with El Clasico and the two are intertwined as tightly as anything could possibly be.

Barcelona are the current La Liga champions and certainly are one of the favourites to retain their title while Real Madrid, after spending big in the summer and trying to move forward from a world that lacks Ronaldo are trying their best to be the best again. All in all, it is safe to say that the greatest fixture in club football shall only grow in its importance and shall continue to flourish for many years to come.

Football is richer as a sport and infinitely more magical as a spectacle because of this rivalry. When one sits down to pen the history of football, there would surely be a whole chapter dedicated to these two great institutions and this one epic fixture.