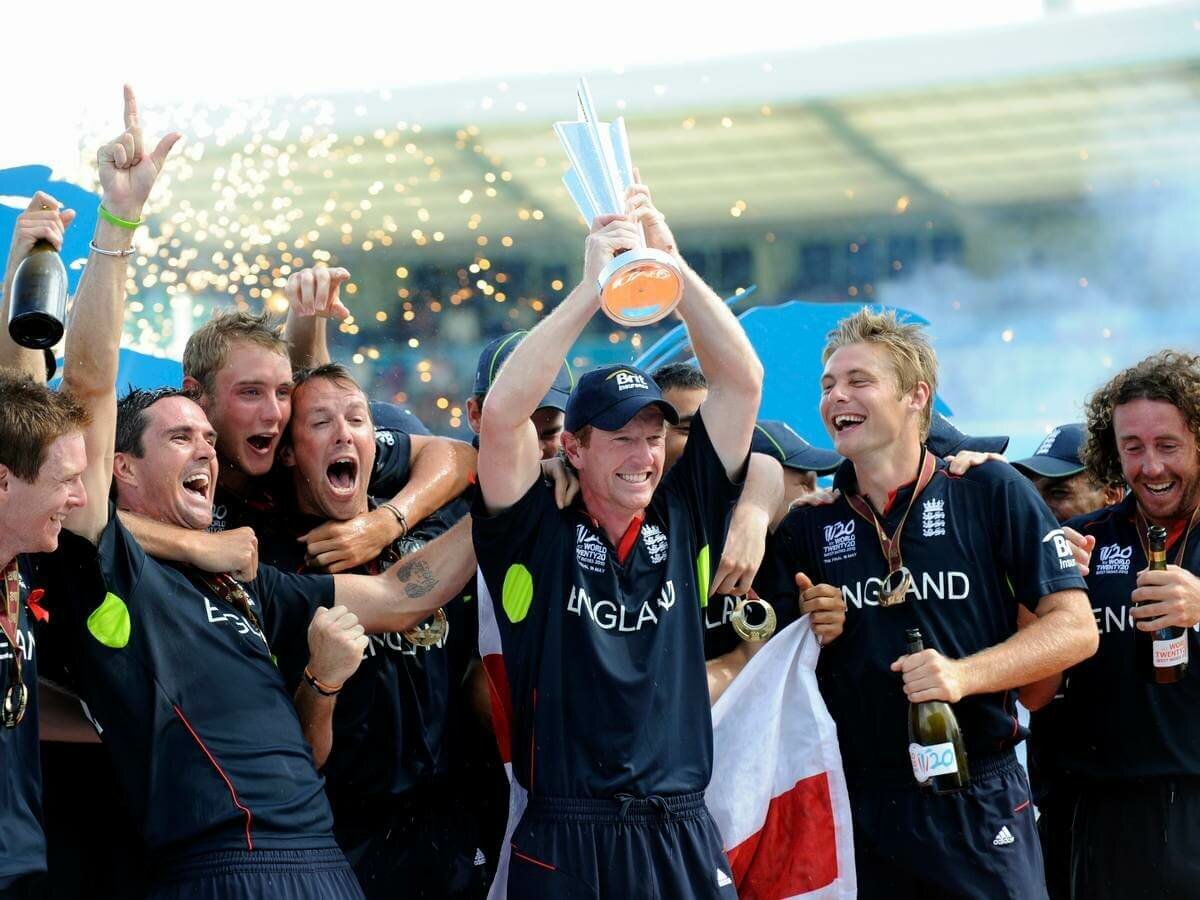 2019 saw England claim their first 50-over World Cup in arguably the greatest limited-overs match ever. Yet it was not their first global title. This weekend marks the ten-year anniversary since that particular honour came, as Paul Collingwood led his side to the 2010 T20 World Cup in the Caribbean. Here, we charter the team’s progress, from an inauspicious start to becoming the team to beat in a tournament that went on to become a cornerstone of English cricketing pedigree.

Edging through the group

England were handed a difficult opening fixture as they took on hosts, West Indies in Guyana. Paul Collingwood’s men put in an impressive batting display, with Eoin Morgan hitting 55 from 35 balls and Luke Wright adding a quickfire 45 to help the side post an imposing total of 191-5.

Unfortunately for England, the heavens then opened. Upon resumption, West Indies required a much more manageable 60 off 6 overs. With Chris Gayle at the top of the order and a Windies crowd in full voice, England appeared to be up against it, and so it proved. Gayle scored 25 off 12 balls, enabling West Indies to get home with a ball to spare.

“There’s a major problem with Duckworth-Lewis in this form of the game”, Collingwood declared after the match. It was hard to disagree with his assessment; England had not got the rub of the green this time around, but they had little time to dwell on the defeat. The following day they would be up against Ireland, and their place in the competition was at stake.

They say that luck does even itself out over time. In England’s case, that particular phrase rang true within the space of 24 hours. After putting in an outstanding batting performance against West Indies, the team struggled to get going in this contest, limping to 120-8. Morgan shone once more, this time with 45, but at the halfway stage, it seemed that Ireland were in with a real chance of dumping England out.

Ireland’s innings did not start well as Paul Stirling was dismissed early on, thanks to a stunning catch from Michael Lumb. They were never given the chance to get back on track. With 3.3 overs gone and the score at 14-1, rain began to fall, and the match was abandoned without any further play.

Due to 5 overs of the second innings not being completed, the game was declared a ‘no result’ and each side were handed a point. England were through to the next stage by the skin of their teeth on the back of having a superior net run rate to the Irish.

The next stage of the tournament was the Super 8s, with two groups of four teams playing one another in the hope of securing a semi-final spot.

England’s first challenge were reigning champions, Pakistan. Having been involved in two rain-affected matches to date, this was the time to see if the English were actually ones to watch out for or not. For the first time in the competition, England bowled first, and they did well to restrict the potentially dangerous Pakistan batting line-up to 147-9.

With 148 to win, it was time for Kevin Pietersen to come to the party. England’s supremely talented No. 3 had experienced a frustrating tournament so far, getting out in both of England’s previous games by pulling straight to square-leg. He was not in the mood to make that mistake a third time. After an opening stand of 44 between Lumb and Craig Kieswetter set the tone of the innings, Pietersen arrived at the crease to put on a masterclass. He struck an unbeaten 73 as England won by 7 wickets. The team were well and truly up and running. 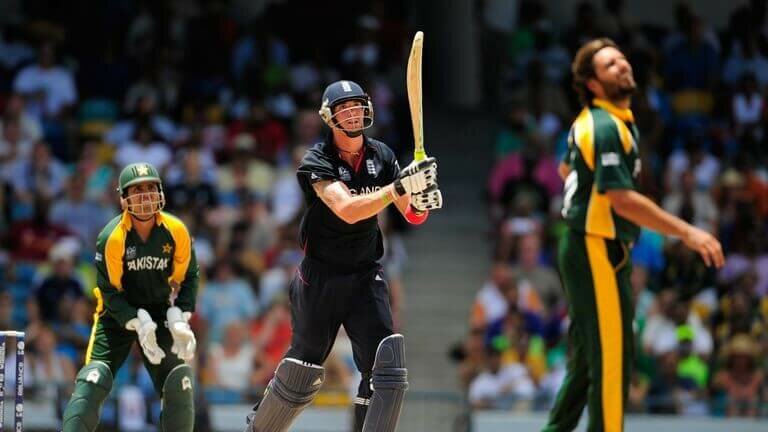 Next up were South Africa who had also won their opening game of the group. Once again, Pietersen was in imperious form. This time he bludgeoned 53 from 33 balls and was ably assisted by Kieswetter who hit 41 as England posted 168-7. It was a gettable target for Graeme Smith’s side, but they were never in the contest due to some excellent bowling.

England had found a well-balanced bowling attack, with left-armer Ryan Sidebottom offering a different angle, Stuart Broad and Tim Bresnan controlling the run rate with unerring accuracy, whilst Graeme Swann and Michael Yardy doing the job of rattling through the middle overs, picking up vital wickets along the way. On this occasion, the wickets were shared around, with Sidebottom and Swann both getting three apiece to bowl South Africa out for 129. A 41-run win, and now England had momentum heading into the final group game.

Only New Zealand stood between England and a semi-final place. However, adversity struck as England were going to have to get the job done without their star batsman. Pietersen had flown home to attend the birth of his first child, meaning that Ravi Bopara was drafted into the side. New Zealand were kept to 149-6, with Bresnan picking up a wicket and going at just five runs per over. The Yorkshireman would then produce with the bat in hand as well, scoring 23 off 11 balls to steer the team to a 3-wicket win.

“Everyone’s really excited with where we’re heading for the future. We’re getting better every day, and it’s fantastic to be a part of it”, Bresnan revealed after the game.

England were on a roll and the semi-finals were on the horizon.

England were now the form side left in the tournament. With a bowling attack that was both well-rounded and economical, with slower-ball bouncers working particularly well, they were regularly restricting sides to less than 150, whilst their top three were firing in the batting department, and the middle order had shown throughout the tournament that they perfectly capable of chipping in when needed.

Sri Lanka were their opponents in the semi-finals, and they had some heavy-hitters at the top of the innings. Possessing a top four of Mahela Jayawardene, Sanath Jayasuriya, Tillakaratne Dilshan and Kumar Sangakkara, there was the potential for Sri Lanka to come out all guns blazing. It did not play out that way. 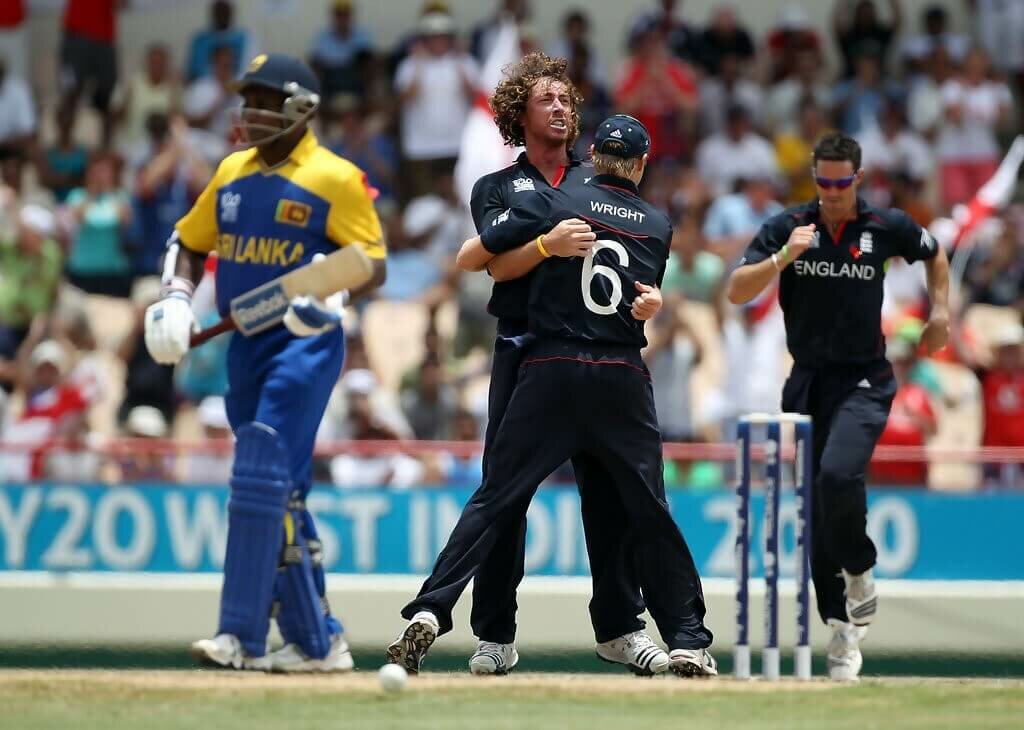 Instead, all four were dismissed with less than 50 on the scoreboard, as England’s bowlers delivered on the big stage. Angelo Mathews struck a defiant 58 to ensure that the Lankans mustered a respectable total, but 128-6 seemed unlikely to be enough.

With Pietersen back from paternity leave, it certainly wasn’t enough. Kieswetter and Lumb made 39 and 33 respectively, providing the platform for Pietersen to round things off with an unbeaten 42. An exquisite on-drive from the last ball of the 16th over booked England’s place in the final courtesy of a 7-wicket victory.

Having achieved four successive victories to get to the showpiece event, England entered the final full of confidence. They would have to be wary though, as their opponents Australia had just pulled off a remarkable run chase to knock out Pakistan, with Mike Hussey hitting a barely believable 60 from 24 balls to get his team across the line.

Less than two weeks after barely making it through their group, England were in the final, only this time there was no sign of any rain to interrupt proceedings. Played under the scorching sun at the Kensington Oval in Barbados, both teams were attempting to win their first T20 trophy.

Australia could hardly have got off to a worse start. Shane Watson, David Warner and Brad Haddin all fell within the first 13 balls, leaving the side reeling on 8-3. Michael Clarke and David Hussey steadied the ship, and once the former had departed, Cameron White struck a powerful 30 from 19 balls, allowing Australia to recover to 147-6. David Hussey top-scored with a measured 59, but once again England had kept their opponent’s total to less than 150. They had shown during the tournament that they were comfortable with chasing this total, and one more well-judged batting display would see them crowned as world champions.

They suffered an early setback as Lumb was caught at mid-on in the second over. Pietersen arrived at the crease with the score at 7-1, and the game in the balance. Rather than looking to slowly rebuild, he and Kieswetter chose to attack. It worked.

Kieswetter crunched multiple drives through the covers, whilst Pietersen continued his tournament form, whacking the ball to all parts of the ground. Playing at his absolute peak, Pietersen produced the iconic moment of the match, launching Shaun Tait back down the ground for a huge six with seemingly minimal effort. Pietersen and Kieswetter were both dismissed within an over of each other, the latter inexplicably leaving a middle-stump Mitchell Johnson yorker, but the damage had already been done. It was left to captain Collingwood to hit the winning runs, clipping the ball through mid-wicket to spark scenes of jubilation from the England squad. 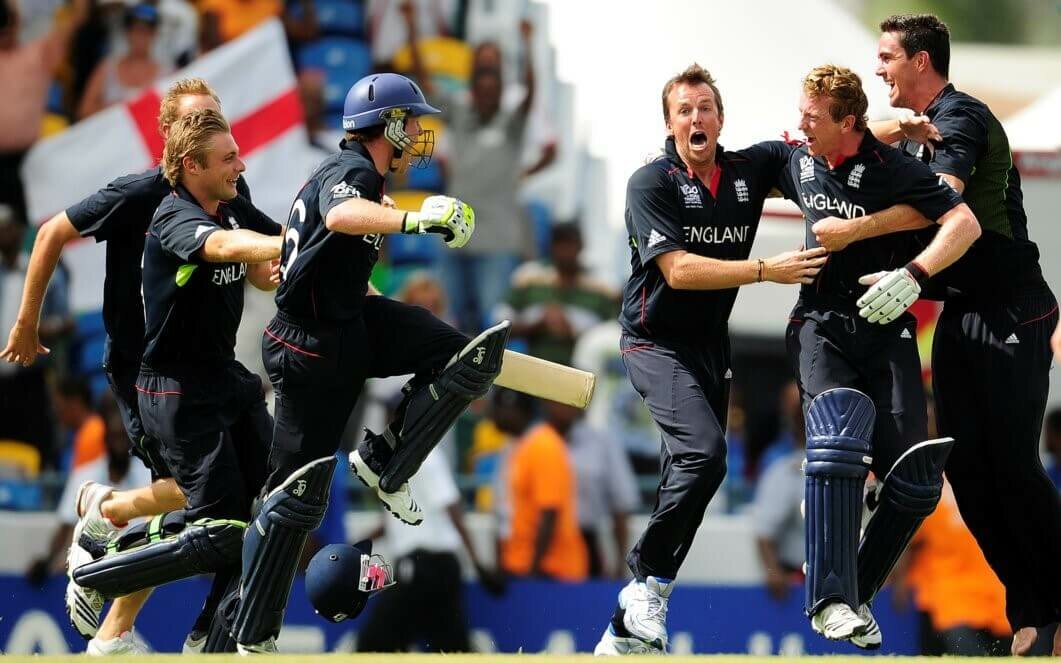 Having been recognised as the player of the tournament, Pietersen reflected on England’s success.

“The more you play, the more you win and the more it becomes a habit, like the great Australians. This team is hungry for success, we want to win.”

Unlike that great Australian side of the late 1990s and 2000s, England have been unable to replicate that winning feeling on a regular basis, having to wait nine years before lifting another global trophy. Yet for one fortnight in the spring of 2010, everything clicked into place. Finally, England got everything right and delivered on the world stage.

SRINIVAS SADHANAND \ IN CONVERSATION WITH